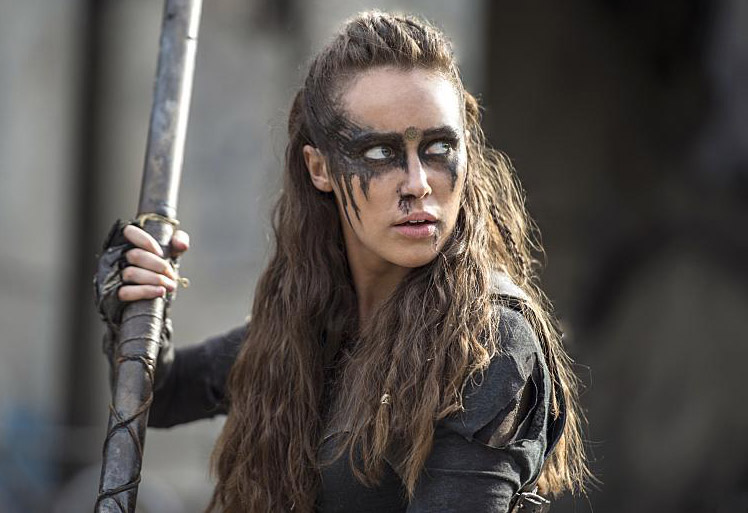 The two part premiere was good, last week's hour was great, but tonight's episode of The 100 was many magnitudes greater than its three predecessors.

In his second episode in the role, Ed Fraiman did a spectacular job in the directors' chair, with third timer Dorothy Fortenberry writing an excellent script.

"Watch the Thrones" was full of greatness, and the coalition, chaired by Lexa, was at the very heart of all proceedings. It was where the hour began, with the ambassadors assembling to assess the repercussions in from the Ice Nation's actions last week which resulted in the destruction of Mount Weather, and the loss of dozens of lives.

Nia, better known as The Ice Queen, was brought into the chamber, and it took mere seconds for the subject to change from the crime that was committed to the leadership of the coalition. The Ice Queen issued a challenge, and incredibly, Lexa accepted it. What's more, instead of choosing a proxy to represent her in the one-on-one fight to determine the leadership, just as Nia did by choosing her son, Roan, Lexa opted to fight herself.

I'm the Commander. No one fights for me.

The City of Light didn't feature in this episode, but the available time was put to great use in Arkadia. Kane and Abby along with Pike were discussing the destruction of Mount Weather, but a difference in opinion is established immediately which will carry right through the episode. Typically averse to violence, Kane and Abby display confidence in Lexa and also Clarke that the Ice Nation would face consequences. Pike immediately digresses:

So when do we strike back?

It's no secret Pike hasn't had the easiest of reintroductions to Earth. His beloved Farm Station has suffered horrendous losses, but what he has failed to fully understand is that the society he now finds himself in is no longer a lawless mess. For someone who has an otherwise skilled, wise mind, this is a major fault, and it serves as the primary driver for his actions in the dying minutes of the hour.

They had a bye last week, but Jasper and Monty made their presence felt in a surprising way tonight. Jasper's circumstances have failed to improve significantly since we last saw him, and thankfully Monty, like myself and many other fans, had reached breaking point with Jasper's antics. The pair ended up at the site where they first landed on Earth, with Jasper intending to celebrate Memorial Day in his own bizarre way. He even brought Finn's ashes along for the ride.

For three months I've watched you torture yourself, and everyone around you, mostly me. But I'm done being your punching bag. Either you pull yourself together and get on with your life, or you fall apart alone.

Monty let rip here, and he was completely justified in doing so. Hopefully those harsh words will be what forces Jasper to sober up and start contributing to society once more.

Bob Morley delivered an outstanding performance as Bellamy tonight. His character underwent the most development out of everyone in the Sky Crew. It began early in the hour when, out of sheer guilt, he handed in his uniform, effectively resigning from his role as a soldier for his people. His confidence in himself and his abilities is at an all time low in the wake of the Mount Weather explosion and his misplaced trust in Echo. Thankfully, he went to Kane with his dilemma, who wasted no time trying to pick him up again.

Bellamy's low point made his loyalties and ideals much more vulnerable, and it was Pike who took advantage. Hell-bent on seeking revenge against the Grounders for Ice Nation crimes, Pike assembled a team of mercenaries, including Bellamy, to wipe out a largely defenseless Grounder army sent by Lexa to protect Arkadia. This tested an injured and disheartened Lincoln who stood in front of the weapons caches to prevent the mercenaries from killing his people. At a moving memorial service for those lost inside Mount Weather earlier in the day, Lincoln's allegiance was called into question by an angry mob resulting in him being hit in the head with an object. In an otherwise quiet night for Lincoln, standing up to Pike was a substantial display of loyalty to the Sky Crew, and actor Ricky Whittle did an excellent job here. 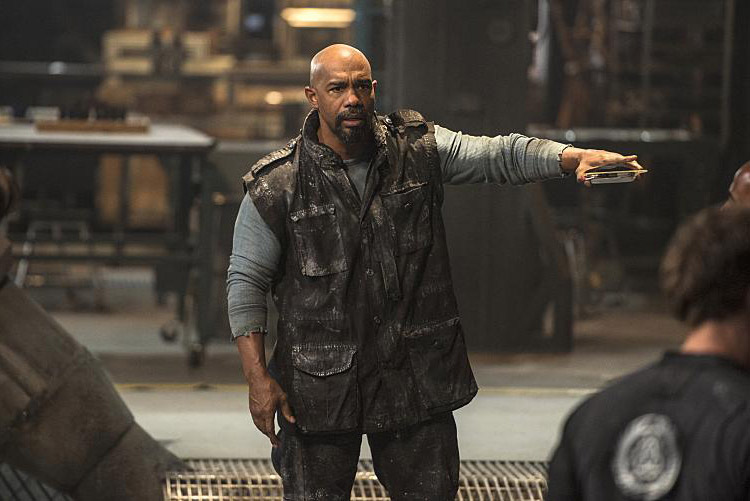 The fracas at the memorial service had unfortunately caused a majority of the population to vote in Pike as the new Chancellor in the elections Abby opted to hold. Pike was presented the Chancellor's badge while still locked up for the earlier attempt on the Grounder army, and Pike immediately enacted a plan to slaughter the Grounder army.

Let's finish what we started.

Pike's election is the most significant event to happen to the residents of Arkadia since the Ark came to Earth. What seems more than likely now is Kane and Abby opting to split from Arkadia and form a new colony with those who support them. It's entirely plausible at this point that we will have two Sky Crews, with one being the thirteenth clan to join the coalition, and the other operating on their own. This will produce some fascinating battles for possession and territory, along with endless other possibilities.

Despite the political power play in Arkadia, the real action was happening in Polis, where zero hour had arrived and Lexa's fate was moments away from being determined. Roan and Lexa dueled spectacularly, with the choreography and cinematography featured in this scene surely one of the series' finest moments in both areas. In the end, neither Roan nor Lexa fell victim, with Lexa instead ending the life of the Ice Queen with a spear to the heart. Jasper will be thankful it wasn't Lexa who threw the spear that critically wounded him in the series premiere. 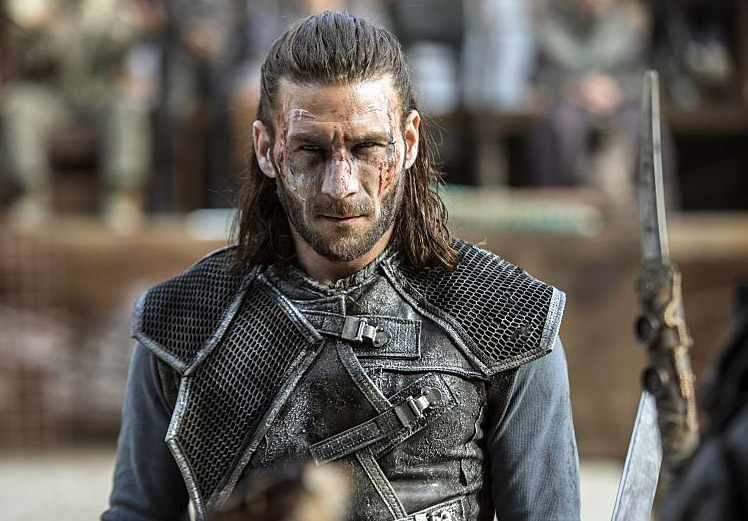 While Lexa lives on, the prospect of death did not concern her in the slightest. We got to see another side to the character best known to many as the one who betrayed Clarke and her people during the battle for Mount Weather. What we saw tonight was a young woman who had the interests of her people placed ahead of her personal wellbeing. She opted to fight Roan herself for this reason, and personally training her successor also aligns with this.

Arguably, Lexa's Achilles heel, but one of her greatest strengths, is her extreme confidence in her abilities. She defied her advisors - including Clarke, when opting to fight Roan, and even accepting the Ice Queen's challenge for the throne to begin with was a massive risk.

While Clarke and Lexa may not have seen eye to eye on a number of things tonight, there can be no doubt that the pair are better off for it. This is epitomized in the final scene in Polis where Clarke is joined in her room by Lexa. This is where Lexa's ideologies truly shine, and it's where Eliza Taylor and Alycia Debnam-Carey delivered their most powerful performances of the hour.

You ambassadors betrayed you. How do you move forward?

They were doing what they believed was right for their people too.

The answer to the question Clarke asked here shows how much more mature and reasoned Lexa is than many people had believed. It's clear Lexa is wanting to work with the clans she leads, not against them. Clarke, and the members of Arkadia, need to understand that Lexa is a lot more progressive than what they had first understood, and becoming the thirteenth clan under Lexa's leadership is truly a golden opportunity. Though Abby and Kane share these values, Abby's lack of resilience in the Chancellor's role, and Kane's poor judgement in encouraging it has resulted in the wrong man now being in charge of the Sky Crew. It's no doubt the cornerstone of the next few weeks, and while the ride may be rough, I'm looking forward to watching it unfold with bated breath.

To sum up, this episode is the first this season to reach that epic level we know this series can deliver. We saw some fantastic character and story development in both Polis and Arkadia. While I've written in previous weeks that I'm not the biggest fan of a series introducing politics in order to expand, this episode is by far the best exponent of this to date. I'm much more confident in the creative team's ability to keep things together than I was during the season premiere. I think the cast had the best all round performance in this season to date as well, and the writing and directing were both excellent.

Thanks so much for reading! As always, don't forget to share your thoughts and theories in the comments below. My review last week saw a staggering 300+ comments come through which was awesome. You can also vote in our poll just below to tell us what you thought of the episode.

About the Author - Jimmy Ryan