With COVID having scrapped the last couple of episodes, the finale episode of Season 4 of American Housewife aired this week, and it saw the Otto's taking on a popular end-of-school tradition - prom!

But, before Taylor goes to prom, Greg and Katie want her to complete the last item on her "life-skills" list - teach Greg to shoot a three-pointer! (Katie put it on the list because she knew it'd be funny to watch!) Meanwhile, Oliver and Cooper have other plans. Since they're only sophomores and can't go to actual prom - Cooper is throwing "Crom," his own alternative prom. 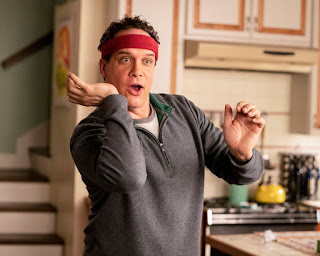 Trip and Taylor attempt to teach Greg how to shoot a three-pointer, but since Greg is bad at basically all the sports, it doesn't happen. Having seen how hard Taylor tried, Greg tells her she can go to prom anyway. But, Taylor's determined to actually finish the list, and insists she isn't going unless she can actually get Greg to shoot a three-pointer.

At Teen Helpline, Oliver ends up on the phone with a girl who's sad she didn't get asked to prom. The two have an obvious connection and spend a long time talking, with the girl finally asking Oliver if he'd like to go with her. At first, Oliver is hesitant, as going out on a date with a Helpline caller is definitely against the rules, but he ends up agreeing. Since he isn't allowed to ask her for any of her information, he gives her his name and address and she says she'll pick him up.

Cooper's not too happy to hear that Oliver is ditching "Crom" to go to the real prom, but Oliver insists it's the right thing to do. Cooper tells Oliver it seems suspicious that a senior would just suddenly ask a sophomore to prom, especially over Teen Helpline, and wonders if Oliver is being duped. Oliver realizes Cooper might actually be right and vows not to spend the next night waiting around, only to humiliated in the end.

While the big kids are getting ready for prom/crom, Katie and Greg have their hands full with Anna-Kat. She's started acting like a "tween" and isn't interested in talking to Katie and Greg about anything. When Katie gets an email from Principal Ablin, about bullying going on in Anna-Kat's class, she isn't too concerned. (Unsurprisingly, Katie is a former school bully. Greg, meanwhile, is a former school bullying victim!) But, while doing her weekly snoop through the kids' things, Katie finds a note in Anna-Kat's bag from someone named Tilly that says "You suck." Now that she's realized Anna-Kat is the one being bullied, Katie's changed her tune completely. (She wants Ablin "to be given a swirly and shoved in a locker," for not telling her exactly what was going on with Anna-Kat.) When she and Greg try to bring up the topic of bullying with Anna-Kat, she completely shuts them down and acts like nothing is wrong.

Later, Katie asks Doris and Angela for advice about the bullying situation. Doris advises Katie to come up with a mean name that rhymes with Tilly. Angela advises Katie to talk to Tilly's mom. Katie, surprisingly, decides to take the high road and talk to Tilly's mom. But, it's Katie, so the high road ends up being a short one. Tilly's mom has barely had the chance to sit down when Katie bombards her with the situation and accuses her of being a bad mom. Katie's got another thing coming though. Tilly's mom calmly pulls out a bunch of other mean notes, all written to Tilly. Apparently, the note Katie found doesn't say "You suck, Tilly." It says "You suck Tilly." Yeah, Anna-Kat wrote it. Commas, people, commas!

At home, Katie tells Greg what she found out from Tilly's mom and Greg suggests that maybe Anna-Kat got the bullying from her. Katie insists, no, that's not it, it must've been the penguin documentary Greg showed her! When they confront Anna-Kat, she admits to it and says she did it because the cool girls told her too. Besides, she knows Katie did all sorts of stuff like that in school and it made her cool. Katie begrudgingly realizes that Greg might have been a little bit right. She tells Anna-Kat, "I didn't raise you to be like me. I raised you to be better." Katie then says that not only does she need to apologize to Tilly, but she's finally getting the punishment Katie's been threatening her with since she was five. She's signing Anna-Kat up for soccer! ("...and I'm going to buy your father a little foldy chair and he's going to sit on the sidelines and cheer you on...and I will watch from the car where there's air conditioning!") 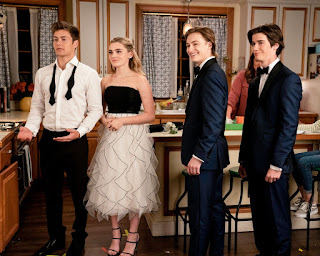 As the older kids come downstairs ready for prom/crom, Greg says the he knows what it's like to be bullied for no reason, and recounts the story of scoring the winning shot in a school basketball game...only it went in the other team's hoop! (So yeah, maybe they had some reason to bully him!) Greg wonders if that experience has anything to do with why he can't make a three-pointer now. And it would be helpful if he could make the three-pointer now because Taylor's still determined not to attend prom since she wasn't technically able to finish her life skills list.

Cooper tells Oliver that Greg's story has made him realize Oliver really needs to go to prom, because if his prom date is real and he ditches her, "it could bum her out for life." Oliver agrees he should go to prom. ("But I've gotta say, this new empathetic version of me, I don't care for it!")

Greg tells everyone he feels like a weight has been lifted now that he knows what's been holding him back, and he wants to try the three-pointer again. The whole family goes outside to watch Greg try the shot and Oliver's date pulls up. It's one of the most popular seniors in the class! Apparently, none of the boys asked her to prom because they all thought she had a date or where too intimidated to ask her. (Katie comments "It's just another in a long line of auto men punching above their weight.")

Cooper's helicopter flies over the house to pick him up for crom and the stretch limo arrives to get Taylor and Trip, so it's now or never for Greg. And although it takes him a couple times, with everyone cheering him on, he finally makes his three-pointer! Cooper has his helicopter pilot turn the spotlight into a disco light and put on music and everyone dances in the driveway to celebrate.

-The best line goes to Katie when discussing what to do about Tilly, "What is the best way to get back at Anna-Kat's bully...who's a child...without breaking laws?"

-The behind-the-scenes bloopers at the end were hilarious!

Did you think Taylor was going to be able to complete her list? Were you surprised at Oliver's date? Let me know below, and hopefully, I'll see you all next fall for another season!