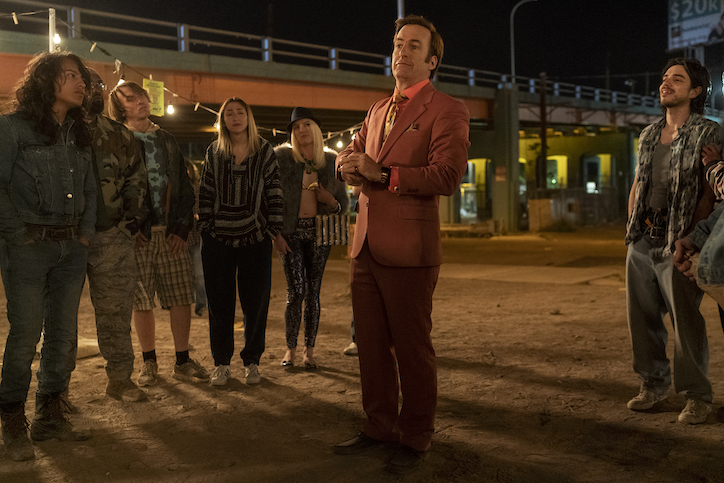 Like every season premiere season 5 started with Gene. The last time we saw Gene, he had just gotten out of the hospital for having a panic attack. Gene got into a taxi cab, and on the way home, he notices that the driver was looking at him during the red lights. So Gene got out of the taxi cab and walked back. When he got home, Gene went into his closet and took out the box of personal stuff that he had. Gene empty the band-aid tin on the table. It was full of diamonds and had a phone number. Gene memorized the phone number, then put the diamonds back. He changed the license plate on his car and drove off.

Gene arrived at this little diner in Missouri. He ordered breakfast but was too much on edge to eat. Finally, Gene decided to call his co-workers at Cinnabon to make sure everything goes smoothly for the next few days until he returns for work on Thursday.

When Gene arrived at work, everything seems to have blown over, and it was safe for Gene to resume his life. That was until the cab driver approached Gene while he was taking his lunch. The driver knew Gene as Saul Goodman from Albuquerque and would not go away until Gene would admit it. Gene had no choice; he had to admit that he was Saul Goodman and was forced to do the "Better Call Saul." Gene knew he couldn't live like this and needed help to fix this situation. So who did he call, the "disappearer" the man he called back in Albuquerque. But then Gene changed his mind and decided to get brave and fix the situation himself.

Now that Jimmy got his law licenses back, he has decided to go by his alter ego Saul Goodman. It came to a massive shock to Kim, and she doesn't seem to be too supportive of the choice. Why would her boyfriend have changed his name? Jimmy tries to explain to Kim that he is already going by the name Saul Goodman with his cellphone customers; he will now be their lawyer. Kim told Jimmy that he has her blessing and to go ahead with it.

Ever since Don Hector had his stroke, his nephew Lalo came up from Mexico to keep an eye on things, which makes everyone on edge, especially Nacho and Gus. Gus wants to know what Lalo is doing here and how long he plans on staying. Because until he leaves, construction on the superlab has to stop. Gus cannot run the risk of Lalo finding out.

Nacho is just scared all the time. He's worried that Gus will kill his father, or Lalo will kill his father. Nacho needs to get out. After the pickups, Lalo asked Nacho and Kazy-8 how everything was going? Where there any problems? Well, Nacho mentioned that the skells have been complaining that the meth hasn't been the same lately. So Lalo told Nacho to take him there and let him check it out for himself.

Jimmy and Kim are at home, celebrating the fact that Jimmy got his law licenses back. Kim gives Jimmy the briefcase with the letters JMM in graved on them. Plus the upgraded coffee mug that says " Worlds 2nd Greatest Lawyer. Again" They seem to be enjoying themselves. Kim and Jimmy ordered food; they are watching a movie. But Kim still doesn't understand the reason behind Saul Goodman. Yes, she told him to go ahead with it at the time, but I think she may be rethinking it. They worked so hard to get his licenses back, and now he is just going to be representing criminals.

Mike has a problem. One, he has Lalo trying to figure who he is, and two, he killed a true friend in cold blood. So what has Mike been doing in his spare time? Feeling sorry for himself and working. Lalo did, however, have a chance to catch up with Mike during the meeting with Gus and Bolsa. Lalo wanted to see what Gus was building, and long behold Mike and all the German builders just happened to be in the "chiller" at that very moment. Lucky them.

Magic Man was powerful! It gave us a great head start at what Saul Goodman has in store for us. Kim tries to support Jimmy in whatever he does, but she couldn't wrap her head around this one, Kim "just can't see it." But "she will" give it time.

Lalo has become this character that makes you laugh and scares that crap out of you. He's so polite, like when he finally met Michael during his meeting with Gus and Bolsa. Lalo gave Michael a big smile and hang shack, but Michael knew this guy and knew he was trouble.