Directed by the DP of the Duplass Brothers' underseen 2012 production,Safety Not Guaranteed, Ben Kasulke, the 10th installment of the stupendous third season of Room 104 sadly was aired right after the Halloween season rather than before. Poor timing aside, Night Shift continues the season on a typically 2-pronged-tone note. Not quite an out-right satire like What We Do in the Shadows, a total dramatic showcase like 3x08 No Hospital, nor a controversial-seeking folly like 3x09 Prank Call. As usual with this HBO anthology series, there is no one direction and pigeonholing this show into genre defeats the ultimate purpose.

Luckily, there is enough light-hearted humor in Night Shift so it doesn't get overbearing or difficult-to- buy-into. We start with goth lady podcast host Nina (Marielle Scott) interviewing Ted (Josh Fadem) in the titular motel room (as a podcaster myself, I can tell you a cheap motel room is NOT a good idea for interview recording, no matter how romantic it seems). Nina shows Ted some beautifully rendered behind the scenes footage from a horror show called (you guessed it) "Night Shift" from 1974. Ted was only 25 when this footage was shot, which would make him 69 in 2019 (not sure if that was meant to be a pun). However, Ted doesn't look like he is 69 years of age. Could he be a.....(yes, of course he is!).

After a cheesy homage to 70s horror culture with a POV zoom into a signature, Nina asks Ted why he is giving her this interview now. Ted, in a very Dark Shadows-style retort, replies, "You can only keep things…buried for so long before they…rise up." Nina doesn't know how to react to her former idol, so she just laughs nervously and he excuses himself to the bathroom to readjust his eyebrows to make himself look like an older picture of himself (presumably for her). Nina then stares at a mysterious suitcase surrounded by a dark line that is never explained (probably for the best, yet they still draw a lot of attention to it). Ted then returns and offers Nina "wine" (which is probably blood). He then recounts the story of how he and his partner, Robert, came to run this show (which is starting to feel like the creepy show from Channel Zero's Candle Cove the more we hear about it).

The story doesn't go very far in explaining the details that led to their eventual creative breakup, but seeing the jarring change in lighting, camera angles, and hearing the transition to more overbearing music, tells the audience that Ted is trying hypnotize Nina in a most 70s-TV-style way (from our POV anyway). But this entanglement is rudely interrupted by a knock at the door by none other than Robert (David Paymer), thwarting Ted's best efforts (seriously, did Nina really think Ted invited her to a motel room just to talk?). Robert quotes Cat Stevens, but Ted resists the urge to follow-up with another catchphrase. They sit down to both be interviewed by Nina. Naturally, the trust comes out about the woman who drew them apart: Camille! The mention of her name results in a hilarious old school vampire hiss from Ted.

They recount how Camille was basically a vampire who wanted Robert, but Ted put his neck out while she slept to be bitten by her and thus connected to her for all time, which Robert refused to do. This devolves into the two former friends fighting and perennial 21st century woman Nina getting out her cell phone to video record these two's antics. Ted then pleads with her to open the parcel he brought, which contains every old-school vampire hunter's essentials. Nina then somehow stabs Robert in the neck accidentally, then flees the scene without so much as an apology.

Naturally, this being a comedy, makes Ted realize how much he cannot fathom eternity without his friendemy, so he does the only logical thing: biting him before he dies and siring Robert to him for eternity...which they intend to spend watching old television in bed together in the motel room! (hilarious, right?!) Robert seems to struggle drinking bottled blood, but the arrival of the housekeeper might nudge him in a more primal direction.

Now, after a slew of more seriously dramatic episodes, I was sort of hoping Night Shift would have been more poignant. Sure, the thought of death breaks through the emotional impasse that these two friends have been in for decades, but the kitschy comedic overtones kind of diminished what emotional effects the story might have had had it been more tragic and less ludicrous. I wanted to know more about Nina's show than the dealings with Camille. And why couldn't we have been surprised with a return of Camille? The blend of the comedy and the darker, more dramatic aspects of the story didn't quite gel with me, even though I appreciated the winks toward the old-school horror tropes. They, like vampires and male friendships in general, don't fade away so easily. 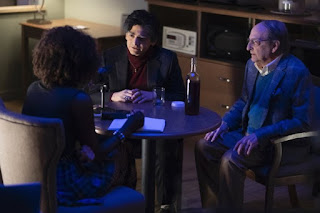