On this week's episode, Katie relives her glory days via Taylor's senior prank and Oliver and Cooper commit to an impossible cause - making Franklin cool!

At the senior music recital, a student rigs the sound system to make it sound like Principal Ablin can't stop farting when he goes on stage to introduce the performer. In retaliation, Ablin bans Senior Pranks. Katie's more horrified than Taylor. After-all, skipping class to sneak into the concession stand and grill hamburgers is one of her best memories of high school! When Katie tells Angela and Doris about her disappointment, Angela says rules are there for a reason, while Doris has a different view. "You know when you're as rich as I am, there are no rules," she says, before demonstrating by slipping the waiter a 100 and having him take the food away from another table and give it to her! 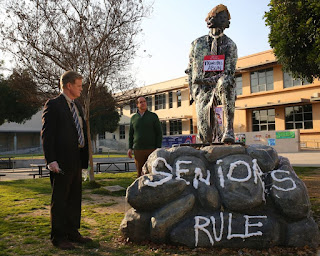 Katie's determined to make Senior Prank work, so she tells Taylor and Trip they're going for tacos and takes them to pull a senior prank. Poor Trip is still yelling, "Woo-hoo, Class of 2019!" (He's hung up on his last attempt at graduating!) At the school, Katie presents the two with silly string, shaving cream, and clothes to make the school mascot statue - the Minuteman, look like Principal Ablin. Taylor's freaked out, but Katie assures her it's harmless - everything will wipe off! Katie gives Taylor (who's now having a great time) the finishing touch - a sign that says "Principal Ablin" and she climbs up on the statue to hang it up. Everything's perfect! Unfortunately, when trying to get down, she breaks the Minuteman's rifle off the statute. And no Katie, it doesn't just snap back in place!

At home, Anna-Kat excitedly tells Oliver and Cooper that she's been invited to her first "party for no reason party." They congratulate her on finally making it with the cool kids. But when she mentions going with Franklin, Oliver and Cooper stop in their tracks. They caution Anna-Kat against taking the "stone-cold weirdo." But Franklin's staying with the Ottos for the weekend. ("His mom's cult is going to Branson, Missouri to take in a few shows. It's not all arms trafficking and praying to the moon!") Desperate not to miss the party, Anna-Kat asks Cooper and Oliver if they can step up and teach Franklin to be cool!

The next morning, a devastated Greg gets a phone call from the historical guild about the Minuteman statue being vandalized. He wants the culprit "dragged by horses and thrown off a cliff!" Taylor's so scared she wants to confess to Greg, but Katie won't let her, instead vowing that sticking together and keeping their mouths shut is the only way to get out.

That plan doesn't seem to be going too well though. Katie told Trip to "take care of the musket." So he, quite literally, took care of it. He washed it and polished it! As Katie tries to regroup, Principal Ablin rings the doorbell. Desperate, she tells Trip and Taylor to bury the musket in the backyard while she gets rid of Ablin. He's there to ask Greg to participate in the investigation of the vandalism of the statute, which Greg readily accepts. ("For History, for Westport, for Mother!") Before he and Greg head off to the school to investigate the crime scene, Ablin announces that whoever committed the crime won't be allowed to walk at graduation. Yikes!

Meanwhile, Oliver and Cooper begin their transformation of Franklin. This involves him losing the tiger shirt and the jeggings, and convincing him not to tell any "funny stories" about getting a fishing line stuck in his extra toe! After a while though, it seems Cooper and Oliver have worked their magic. Franklin's telling cool stories about knowing Beyonce that Cooper had him memorize and they've even got him out of his jeggings!

Katie and Taylor face another problem when Greg goes to use the car and Taylor remembers there's a bunch of empty cans of silly string and shaving cream in the backseat. The two stage a spur of the moment scheme and Taylor chases after Greg to tell him she's concerned about his and Katie's marriage because she hasn't seen them kiss recently. So, while Katie gives Greg the LONGEST kiss ever, Taylor dives into the backseat and cleans out the evidence.

As Principal Ablin continues to lead the outrageous chase to catch the vandals, Greg suggests they do something pretty easy to clear things up - watch the security camera footage. Unfortunately, Ablin tells him the cameras are actually fake. They used the money from the security camera fundraiser to buy fancy couches for the teachers' lounge! It becomes pretty clear to Greg that the search for the crooks isn't going anywhere, at least not with Ablin at the helm.

Back at home, as Greg's telling Katie, Taylor, and Trip that he doesn't think they'll ever catch the vandals, Luther comes in from the backyard, with the freshly dug up musket in his mouth! First Katie tries to suggest that Luther attacked the vandals and kept the musket as a souvenir, and then she just switches to suggesting that Luther himself is the vandal! Katie finally tries saying someone else framed them. But Greg demands the truth and it comes out. He declares he's going down to the school and telling Ablin who the culprits are.

At school, Greg walks in with the musket, and names himself the vandal! And Ablin promptly flips the suspect board to reveal his picture, saying he knew all along. He only put Greg on the case to "keep his enemies close!"

At home, Taylor and Trip discuss not being able to walk at graduation while Katie prepares to blast Greg for turning them in. When Greg returns, he tells Taylor and Trip they'll be able to walk at graduation, because he turned himself in. And as punishment - Ablin put him on the recycling committee - which Greg is not only already on but actually founded. I suppose you could say Ablin missed the mark a little on that one... Greg admits that he understands what Katie's been saying about the best memories of her youth being breaking the rules. His own best memory is when he broke the rules and asked out a girl in the class he was teacher assisting - Katie. 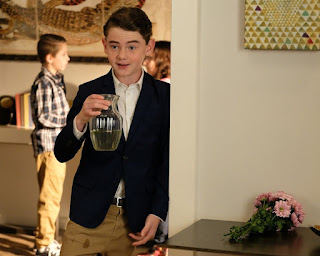 At the party, Anna-Kat encourages Franklin to try out his memorized stories and wow his classmates. And even though he's doing well for a second, he ends up getting mixed up and admitting that he memorized the story, immediately causing the rest of the kids to be suspicious. When Anna-Kat tells him to take a break and get a drink, Franklin pulls a true Franklin move, and drinks from the flower vase!

Later, Anna-Kat discovers Franklin hiding in the piano room. He declares he's going to keep hiding out for the rest of the party. While Anna-Kat goes to get him something to drink (not more "flower water" like he wanted!), music begins to fill the house. Anna-Kat and the rest of the kids go into the piano room to discover the source -Franklin. Apparently, he's secretly a piano-playing, voice-of-an-angel musician who does a mean rendition of Lady Gaga's "Shallow!" The rest of the kids are impressed and Anna-Kat apologizes for trying to change Franklin. She thinks he's perfect just the way he is (even when he's the ghost of
Uncle Julius who died in the canoe accident!) 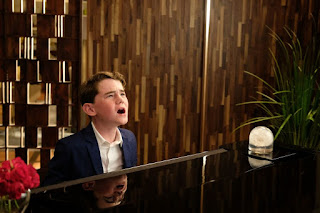 When Anna-Kat and Franklin return home, she tells Cooper and Oliver that Franklin did great, and it had nothing to do with their help! Anna-Kat says there's tons they don't know about Franklin. He's even a black belt. When Cooper and Oliver doubt this claim, Franklin shuts them up by karate kicking a cutting board in half! (He learned it from watching Walker Texas Ranger!)

Random Thoughts:
-This episode really made me wish I had participated in my class's senior prank - they saran-wrapped the math teacher's car!

-The best line goes to Oliver when talking about Anna-Kat getting invited to a party - "You've become a cool kid, huh? My money was on shut-in or serial killer."

-The best senior prank story I've ever heard was the year before my mother's graduating class. They stole a local farmer's outhouse and put it on the 40-yard line on the field of their rival high school!

What was your senior prank? Tell us about it below!