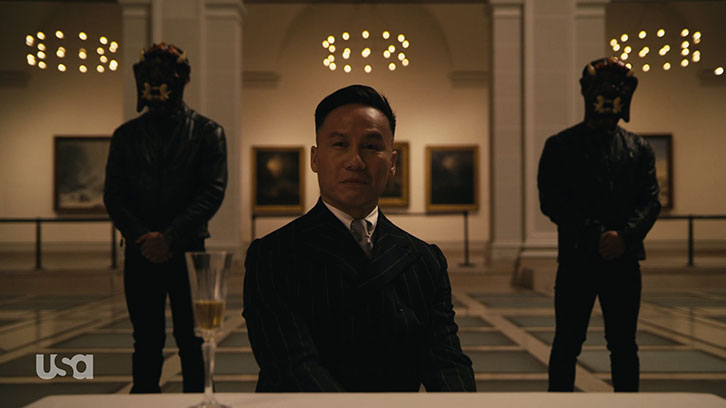 It's been a long time coming, but finally Mr. Robot brings us what we were all waiting for: the downfall of the Deus Group and Whiterose. From start to end, "409 Conflict", was a fantastic and wonderfully entertaining ride. Kyle Bradstreet wrote the episode, with Sam Esmail directing.

I'll come back to the intriguing opening scene in a moment, and will instead start with the episode's primary focus, which was the Deus Group hack. I loved how this all played out. The outcome was predictable enough, but things were never destined to go smoothly, and the way Mr. Robot, Darlene and Elliot managed the bumps in the road genuinely added to the story, instead of creating a burdensome feeling like is so often the case in the world of television.

The first intriguing change was Mr. Robot taking the place of Elliot for the opening stanza, though it was actually Elliot interacting with everyone around him. It seemed to me that this was done as a way to give Elliot a break given his particularly traumatic last few hours (in the series' timeline), in which he was kidnapped by Vera along with Krista, and coming to terms with Mr. Robot's existence in his mind. 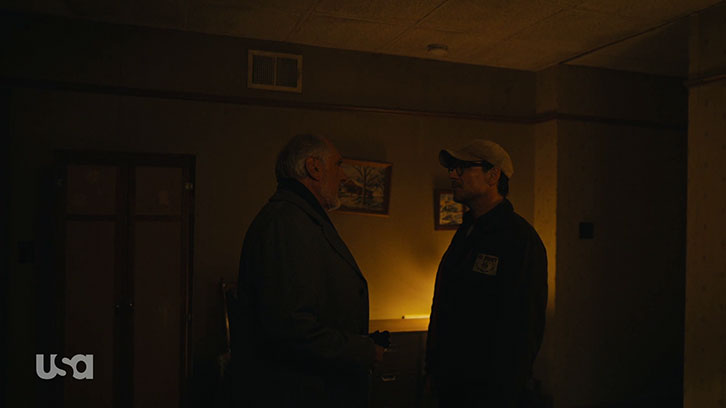 The real Elliot eventually emerged when Phillip Price didn't answer his phone when he went to what he thought was the Deus Group's meeting. Instead, Whiterose/Zhang picked up, and Elliot re-emerged in time to turn down Zhang's attempts to bait Elliot into making an appearance in person under the guise of Angela supposedly not being dead. This was also a particularly torturous time for Price, who was the last person to interact with his daughter in the season premiere before she was executed by the Dark Army.

Not long prior, Price met with Elliot (then Mr. Robot) and Darlene, where they went over the plan to take down the Deus Group one final time. It was also a subtle way to indicate that Price probably wouldn't live to see the hour out, perhaps most obviously telegraphed when he handed Elliot a flash drive containing more information on Zhang's Congo project. And finally, Elliot reiterated that Price wasn't to let anyone leave the meeting because if that happened then Elliot and Darlene wouldn't be able to intercept the 2FA codes needed to authorize the Cyprus National Bank transfers.

Price and Zhang's scenes stood on their own. With the pair situated in the center of a majestic room, but with no other distractions, it was very clear that a war of words was going to take place. Zhang thought he had Price right where he wanted - isolated and defenseless. But Price would soon reveal himself to be the one in charge, beginning when he questioned whether Tyrell Wellick would in fact be among the rest of the Deus members, who were meeting at another location. 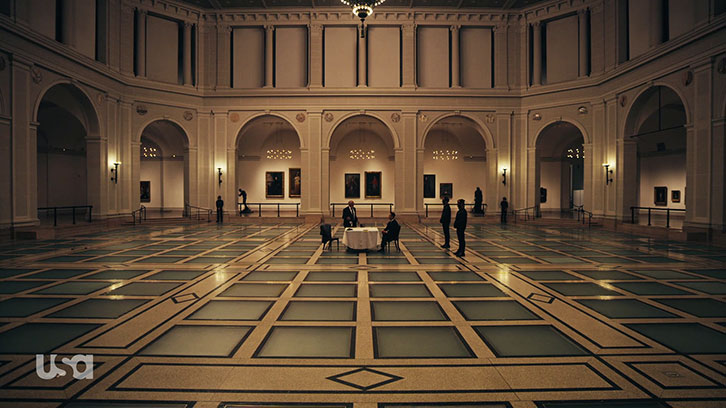 When Zhang's assistant, Wang Shu, confirmed that Wellick couldn't be located, she demanded Zhang leave and attend the Deus meeting as planned, but Zhang flatly refused. So with that, she walked out, only adding more fuel to Price's fire.


He's beaten you. You lost today.

It was then that we finally got a look at the members of the Deus Group, through a spectacular long take that took us from Darlene's position on the exterior of the tightly guarded building, through the main entrance, gliding among the crowd, past what could be Donald Trump, then out the back through the kitchen, and finally out a side door following a worker looking for a place to have a smoke. Awesome stuff as always. Though I confess to not having looked at that scene frame by frame yet, I couldn't see a single female Deus member, though there were multiple female hostesses serving drinks etc. I'm not having a go any anyone here, because at this point in time I'd expect nothing less from a group such as this.


All this over a little pipsqueak in a hoodie.

The next thing to suggest to Zhang that something was very wrong was the release of an fsociety video. This came out of the blue but spoke strongly to this show's past, and how far it has come since its debut season, where fsociety featured most prominently. Zhang still didn't want to abandon ship though, despite several Deus members calling him out of concern. The real chaos soon began, though, with most of the members deciding to leave, but they weren't able to because their vehicles were trapped in the carpark after Darlene managed to jam the security gate. Meanwhile, as Elliot hacked the cell tower closest to him and Zhang to get all 100 Deus members, all it took was for Darlene to initiate the account transfer requests while Elliot did the rest. It was then that Price could finally tell Zhang his precious money had vanished. 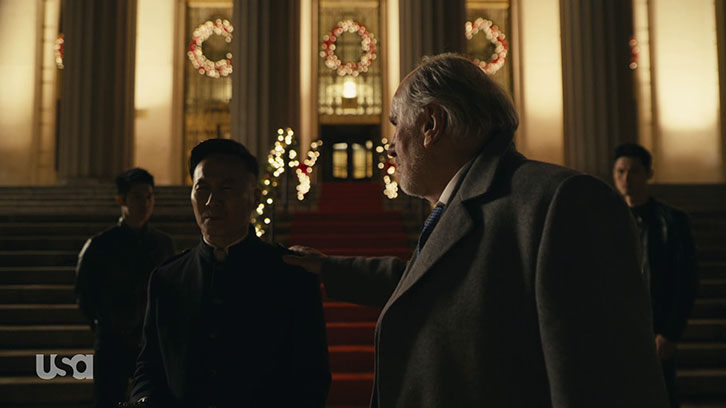 However, as foreshadowed, Price's time was up. For someone obsessed with time and punctuality, Zhang let himself down big time in this episode. The only timing he got right was that of when to kill Price, which he did using one of henchmen's guns on the stairs of the building they had just exited.


You didn't lose the game. You just ran out of time.

The hour closed out with Whiterose back at what I'm assuming as her home. We can hear the FBI pounding on the door as she applies her makeup. Eventually the FBI bust the door down, and multiple exchanges of gunfire can be heard as the credits roll. For a series which pioneered post-credit scenes, Mr. Robot may have also pioneered having to actually listen to the credits (instead of watching them) in case there was any dialog among the shootout which could have been important.

As promised, I'll go back to the episode's opening moments. I'd almost forgotten about this scene by the end of the episode, and it took even more time to remember which episode the scene was following on from. That was the second episode of this season, in which young Elliot and his mother were waiting for "the other one". In this hour, "the other one" turned out to be Mr. Robot, and not whoever the additional person or personality that was referenced in the season's second episode. However these two scenes are still very vague and difficult to understand or contextualize. I'm thinking this is a setup of sorts for what is to come in the final four episodes of the series, now that Deus has been fatally wounded. In an episode which was beautifully paced and easy to follow, the opening scene stands out jarringly as having no real place or purpose yet. I'm looking forward to understanding what it's really all about. 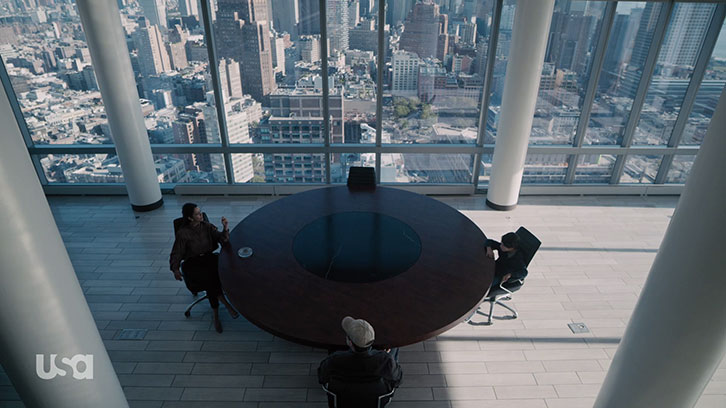 All up, this episode of Mr. Robot was an immensely satisfying watch. It was what we've all been waiting for, and closes out one hell of a Christmas day for the protagonists. Though Deus may be gone, and Whiterose may not have any more money, she still has the potential to be incredibly dangerous. Special shout-out to composer Mac Quayle, who composed some spectacular pieces of music for this hour, and to Michael Cristofer for a fantastic stint as Phillip Price across the series. Price has been a cleverly written antagonist turned protagonist who I disliked early on, but grew more and more excited to see as the series progressed.

Just four more episodes of this amazing show are left. It's hard to believe, really. Thanks as always for reading. I'd love to hear your thoughts and theories on this episode so be sure to drop them in the comments below. I'll see you right back here next week.