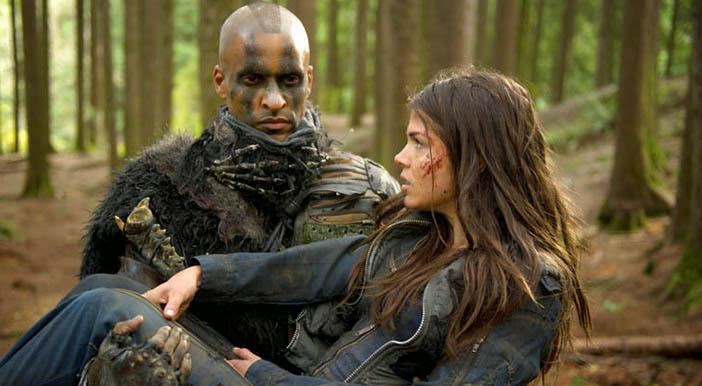 Episode six of The CW's The 100 taught us a lot about a couple of the main characters in the series through flashbacks, as the 100 continue to survive, and begin to thrive, but not without casualties. Thanks to The CW, SpoilerTV has access to screeners for several of the season's episodes, so we can bring you a bit more content than we normally can for many of the other shows we cover. Our roundtable discussion for the sixth episode has questions by Jimmy Ryan, with comments thanks to Daniel van der Veer, Bradley Adams, and Pablo Troncoso Uriarte.

Jimmy: The purpose of tonight’s episode was to grow the background of Octavia, and in particular, Bellamy. Do you think this was achieved successfully?


Jimmy: From the flashbacks, it’s pretty clear that Bellamy had to work awfully hard for many years to care for Octavia when their mother couldn’t. Do you see both characters in a different light now that you’ve seen what they’ve been through?


Jimmy: This episode was the first where we’ve seen multiple grounders, and they were definitely out for blood. The information we have about them is almost nil, so do you have any theories about their being and actions that you want to share?


Jimmy: Finn grew a lot in tonight’s episode. Raven tells Clarke that he is the reason she is alive, and Finn, in addition to locating the bunker containing the radio controlled car, proved instrumental in tracking Octavia’s whereabouts. Do you think he’s one of the most important people on the ground?


Jimmy: Raven and Finn are back together, but Finn is clearly not over his feelings for Clarke. Do you see the former romance rekindling?


Jimmy: On board the Ark, it’s seems corruption could be rife throughout the guardsmen. Commander Shumway played on Bellamy’s bond with Octavia to get him to kill Chancellor Jaha, and another guard used their mother as a prostitute. Any thoughts on this?


Jimmy: Finally, what are you most looking forward to seeing in next week’s episode?


That concludes the roundtable for episode 5 of The 100. Feel free to share your thoughts in the comments below! If you're curious about something, or want to pick our brains for spoilers, follow us all below and send us a tweet! We'd love to hear from you.

On next week’s episode of The 100, titled 'Contents Under Pressure', Clarke and Raven make contact with the Ark, and Abby guides Clarke through a dangerous procedure in a desperate move to save Finn’s life. Meanwhile, on the Ark, the council is shuffled as Abby is removed from the council, and former Chancellor Diana Sydney takes her place. Jaha reveals to Abby that there are not enough drop ships for everyone on the Ark to go down to Earth, and Kane begins to deal with his guilt over his recent decision

Thanks for reading and voting! Unfortunately, we are out of screeners for now, so our roundtables will turn into solo reviews for the time being, unless The CW kindly send us some more screeners.

On behalf of the roundtable contributors, thanks for reading our thoughts and sharing yours! We are all looking forward to enjoying the remaining 7 episodes of the season.
The The 100 roundtable team.