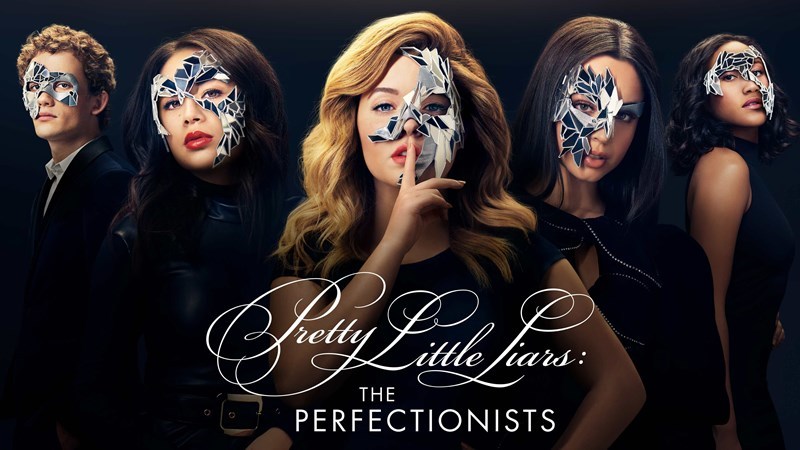 Mona walks into her apartment ready to find Nolan, the dead guy risen from his grave just as she once did, but everything seems in place... aside from an ominous giant present box waiting for her. Someone is trying to out-A Mona and that will never happen, even with a box of cupcakes spelling "Can we be pals" with two googley eyes staring back at her. Taylor settles in at her old house as Alison prepares for her mother's media announcement of her return. She advises her on how to deal with coming back from the dead and in return Taylor gives her tips on marking piles of assignments: "Wine helps". Alison is the only person Taylor trusts, bonding over their shared experiences and common traits. Despite Ali's probing however, Taylor is still keeping her spying to herself, even though Ali knows all about her mini Beacon station.


While all the perfectionists complaining about Alison's class not being the easy A they expected (It's not gonna be that easy, bitch), Alison decides now's the perfect time to drop the Taylor bomb. "I know this is a lot to process but she faked her suicide, happy revision!'. Mona is done with the perfectionist's amateur theories. They're convinced Mason is the killer one day then Dana the next, make up your damn mind. In one of the best comedic moments of the season the liars and perfectionists consult, and while Mona and Alison argue about bunkers and dollhouses the perfectionists sit at the other end of the room like wait a damn minute who are these monsters but those records are of course sealed, they were minors for 6.5 seasons remember?

Mona and Ali finally explain the concept of "A" and if you weren't there for the original run of PLL, this is your crash course. Mona figured out used Nolan's ID to enter Mona's apartment but she's not convinced Dana did it and doesn't trust Taylor either. Back at the secret A RV, Mona argues with Alison over Taylor because while Ali wants to believe in her, Mona doesn't think their similarities are reason enough to let her into the group. Using her resources behind her back Mona figures out a way to scan all of BHU to find her break-in suspect.


Amongst 50 other professions, legal and non, Mona is also a career adviser and Mason knocks on her door with an existential crisis and a lot of guilt over how much of a dick he was to the perfectionists. We been knew Mason wasn't evil and he is, as Mona has pointed out many times, model cute but that doesn't get me on board for whatever pretentious flirting those two are up to. From Mason's comment about music being the math, Mona figures out that he's been her elusive Bad Bishop all along... so much for queer baiting us by saying BB could be a woman.

Mona finds Alison looking sad and wistful on a park bench. They sit together and reminisce about Rosewood and starting over. Alison was convinced that they'd live their best beacon heights lives, drama free but is constantly haunted by drama and lies. Mona tells Alison to follow through with reinventing herself, without letting her past define her. This is so heartfelt, our queens supporting each other.

Using her gait recognition program (not a gay recognition program as was my initial understanding), Mona gets a match for her intruder and tracks them down! Before Ali can kick Taylor out, Taylor has already packed to find her Mini beacon guard. About that... Pleasantly surprised with Taylor coming clean about it, Alison confesses about knowing Mona stole it. After Mona's tracker leads her directly to Dana taunting the perfectionists, Mona struts into Ali's house and declares she refuses to be a doll. Dana thinks she can play Mona's game? Not on her watch. The liars promise to take the ho down.

Everyone is snapping under the pressure of dead week after murders and car accidents and nerve injuries. Who will make it out alive? The perfectionists help Caitlin settle in her mum's place but she's not willing to let something as trivial as a car accident hold her back from her career goals. They suddenly all remember they have deadlines and compete for who's busiest and more screwed as #deadweek begins. Now that's a perfect episode title.


In her art history class, Ava is paired up with Zach who as you may recall hates her guts. They're trying to use puzzle pieces to figure out what painting it belongs to, how prestigious can BHU really be if that's part of their exam? Ava offers to code a program to reverse search the piece and find a match... someone should tell her about google image search. Zach is like omg that's CHEATING. Get a life, get a grip, get over it

Unable to continue playing the cello due to his neglected injury, Dylan doesn't know how on earth he's going to find the time to record his solo on top of all his other midterms. Caitlin studies with Jeremy, the rejected British Cullen brother and If they had barely any chemistry when they were together they're really cancelled now. "Ending birth-rate citizenship is unconstitutional" she recites while he takes off his short in an effort to fix all her problems and calm her anxiety. Thank you, next

Dana returns to give Caitlin some news about her hit and run. They all try and avoid her gaze but she can smell blood and announces she was hit by a minor, case closed. Dana I love you girl but the perfectionists and liars are right, you're shady. Trying her best not to be shaken by Dana, Caitlin arrives at her big senator interview and intimidates all her fellow competitors but when the interview happens instead of any actual questions, she has to answer a buzz-feed personality quiz; what reality tv show does she prefer? Pizza or tacos? Apparently, that's an appropriate thing to ask from a university student candidate.

Dylan isn't handling the news of his incomplete grade well so he records an old record and submits it as his own. Ava continues to struggle with Zach who lies to her about being stuck at work and so instead of meeting him, she grabs a free anchovy pizza and sits with Andrew to try and patch things up for him and Dylan. After going at it all night and with the help of Zach who turned out to just be doing shifts as a campus cleaner, she finds the painting and they turn over a new leaf in their family drama.

After completely bombing her internship interview, Caitlin drowns her sorrows in carbs with the most meticulous and complicated burger order I've ever heard. PLL's weirdly beautiful obsession with food has always been the source of a lot of my joy. She rants about her entire interview to the waiter, including her thoughts on the cultural misappropriation of tacos. This episode begs the most important question of them all: is there a wrong answer to pizza or tacos? Unable to let it go, she meets with her interviewer after hours having given more thought to her questions. Jeremy meets her at the burger place and they have a do-over date and he's still as boring as ever.

At least one good thing happens to Dylan in this episode when Andrew apologises for missing his performance and they make up after the Nolan thing. The perfectionists are back in action and ready to catch Dana being "A". The iconic moniker is back yall! Although If they knew a thing about A they'd know not to talk about them in PUBLIC. While they're all revising, the record Dylan shamelessly plagiarised starts blasting through the speakerphone and Dana looks over from the end of the hall and grins. Bitch is on to you.

Gif by vanessamorgan.tumblr.com
Killer Look: For the first time this season I actually did not enjoy Ms. Dilaurentis's trenchcoat. Throw it away. Mona, on the other hand, is giving us everything in her leopard print coat.

Lingering mysteries: We know Dana was not pigman because she appeared right after he chased them down the sewers in his reenactment of Stephen King's IT. It's safe to assume Dana is working on her own agenda to frame them while the real "A" is waiting around to do the same thing.

Suspect pool: We've started running out of suspects as we reach the finale. Cross Mason, Dana, and Zach off the list and all we have left is Taylor...

Rating: 4/5 times we waited for Mona to get a girlfriend only to be let down yet again

This episode revolves around students screwing up and asking for a second chance which is great and all but only possible if you're besties with your TA or the daughter of a congresswoman.

What did you think my pretty little perfectionist lying dolls? Let us know in the poll and comments below: