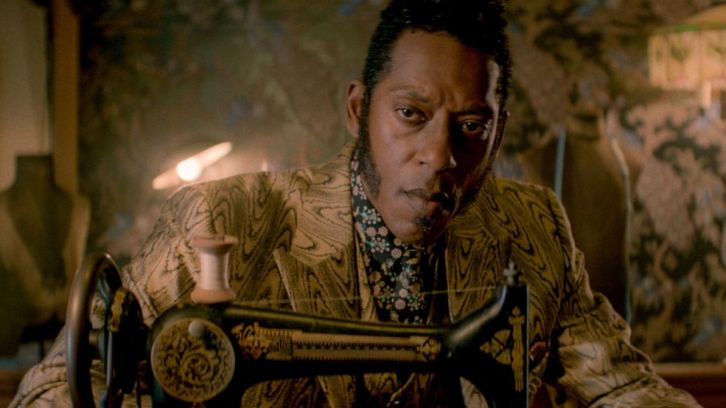 
“Funny enough, I actually looked more like Lucille Ball back then than I do now, just in terms of the angularness of my face,” Anderson continues. “So I had that experience of being her for a day, but it was, of course, different from trying to figure out what aspect of her to present in ratio with what aspect of Media, and who is Media, and how does Media come through, and which bit of Media lives in each of these characters?”

Source:
Read More on EW
Mr. Nancy kicks off this episode, obviously straying from his introduction in the book in an incredible way. What was the genesis of this speech? And I hear Orlando Jones got a standing ovation on set?

FULLER: Yeah, he did. We were trying to create a tonal land grab that was not necessarily inflammatory but spoke with a brutal honesty about the black person’s experience in coming to America that perhaps two white men had no business doing but were nevertheless compelled to break it down as we saw it. And it was Orlando Jones that really gave it life. He was the electricity that brought that passion and clarity and complexity because his performance… he uses five different dialects while he’s speaking to the slaves on the ship, using Afrikaner accents, Creole accents, all of these different preachers, essentially, woven into one, which was an attribute of his growing up and going to five different churches every Sunday because his mother wanted him to have a well-rounded religious experience. So we were very fortunate to witness him applying everything he knew about preaching and shaping it per line of dialogue, sometimes even to a word, where he would shift into a different dialect to underline or highlight what he was saying so it had maximum impact for him as a storyteller. And that was incredibly impressive.

Source:
Read More on EW
Has being part of this show changed the way you think about faith?

Absolutely. I’m a firm believer, since I was born, but I believe even more now that we’re here for a purpose on Earth, and we’re doing everything we can to, excuse my French, but to f— it up. How brittle life is yet it’s been going on for thousands and thousands of years. Maybe we should sit down and pay tribute to life instead of just destruction.

Shadow questions his decision to work for Mr. Wednesday after learning of his plan to rob a bank; Shadow makes a surprising discovery when he returns to his motel room.