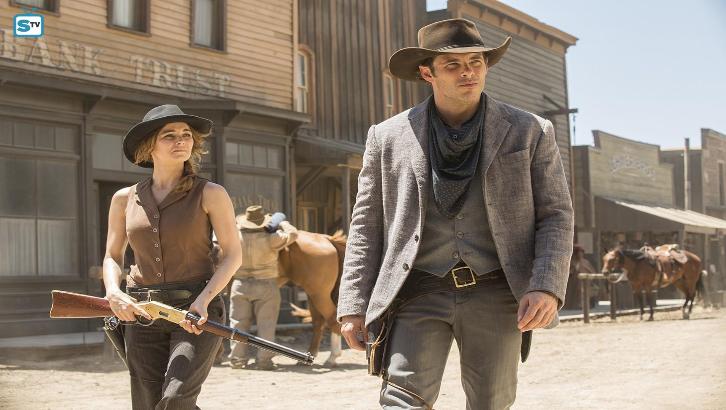 Elsie (Shannon Woodward) and Stubbs (Luke Hemsworth) head into the hills in pursuit of a missing host. Teddy (James Marsden) gets a new backstory, which sets him off in pursuit of a new villain, leaving Dolores (Evan Rachel Wood) alone in Sweetwater. Bernard (Jeffrey Wright) investigates the origins of madness and hallucinations within the hosts. William (Jimmi Simpson) finds an attraction he’d like to pursue and drags Logan (Ben Barnes) along for the ride.


One awesome line in that scene is Angela saying to William after she comes onto him, “If you can’t tell, does it matter?” which really summarizes a lot of the ethical conflict in the story.

Lisa Joy: Thank you, and it was a line we felt summed up some of the moral quandaries we’re examining here. People are very accustomed to playing a video game and plowing down a bunch of other characters in it and cheering because that’s how you win. But as the visuals become more and more sophisticated, you start to feel empathy, and it could get harder and harder to shoot – and should it? We’ve been looking at VR and it’s a whole new level of immersion. Watching it in a virtual reality environment it made me feel more morally complicit in my actions. Even if the characters are not entirely lifelike, what does it say about you that you can abandon yourself to the nihilistic act of destruction. It’s becoming a more relevant question.

Nolan: It’s also a way of articulating the Turing Test.

Can you say if the Man in Black is hacking the game by his actions, or is everything he’s doing – from scalping a Native American to killing Lawrence’s wife – are those exactly the steps he’s supposed to take to reach this other secret level?

Nolan: As a reformed gamer I was fascinated in how any popular game is instantly scoured for mistakes or Easter Eggs. That programmers quickly realized mistakes could be deployed as Easter Eggs for the hardcore gamers who quickly work their way through the main narrative. So there’s sometimes a hidden narrative underneath. Now whether he’s right or wrong is a question we’ll continue to explore.

The way the episode opens and closes suggests that Bernard told Dolores to go get that gun. Is that what we’re supposed to think?

Joy: It’s an interesting theory. We’re definitely supposed to think Dolores hears a voice and has a compulsion toward a gun. We’re not sure where exactly the voice comes from.

Source:
Read More on EW
Newton compares the scene to the death penalty — specifically, real stories of executed prisoners she's been reading about in "Just Mercy: A Story of Justice and Redemption," a New York Times best-selling novel about the United States prison system, written by Bryan Stevenson. She says: "I've read quite a lot about the death penalty and how barbaric it is. Every time I read about someone who has been executed, it's a botched execution, and it happens again and again. It's supposed to be a humane way of dying. That's the whole point — it's supposed to be humane. One guy that I'm reading about in Bryan's book, it took him almost an hour to die. I feel like the word 'humane' needs to be rethought quite seriously. If that's supposed to be our standard for goodness and ethics, we need to change it."