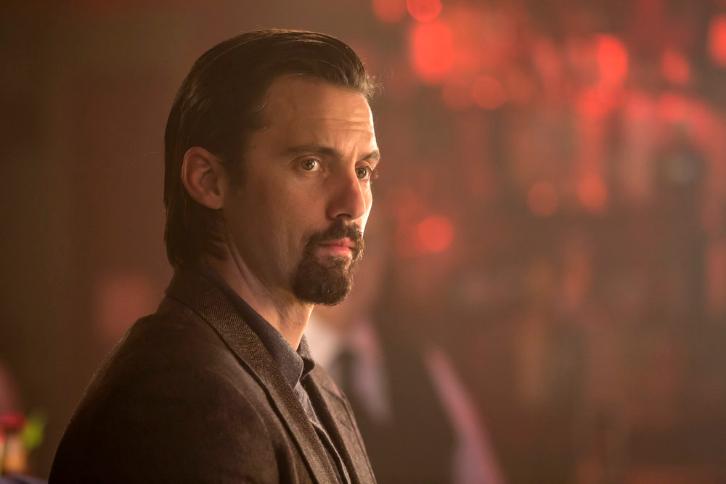 02/14/2017 (09:00PM - 10:00PM) (Tuesday) : As Kevin stresses about the premiere of his play, he receives support from an unexpected source. Randall struggles under the pressure of both his work and ailing father. Rebecca and Jack's Valentine's Day doesn't go as planned. Toby and Kate decide to dig deep and get to know each other's biggest secrets.


How serious is this situation? People might freak out a little bit when they see his trembling hand.

Yeah, I think people are going to freak out a little bit, and then people are going to learn a little bit more in the subsequent episode and episodes. Anxieties manifest themselves in many different ways for different people. For anybody who’s ever had even the simplest of panic attacks —which are never really simple — it can be a really devastating thing. You can feel and experience physiological symptoms that are so real that they show themselves with tics. And it’s a very serious thing. People build their lives based on avoiding them or dealing with them, and he’s had some form of a breakdown in the past, which we’ll explore a little further. And if it’s rearing its head, it can be a very dangerous thing.

Source:
Read More on EW
When you first got the role how much of Miguel’s backstory were you actually privy to?

I wasn’t privy to a lot. They were still developing who Miguel was. The canvas is still pretty open; there are lots of colors to add. It’s something we’re talking about together a little bit now. Dan has a plan and I just sit back and am excited to learn more about him as time goes by. A lot of time when we’re not filming, Mandy, Milo and myself sit around speculating who Miguel is and what the relationships are. We’re always super excited to read a script to learn new things about our characters or relationships. Miguel is still a work in progress even in Dan’s mind.

What about in terms of the character himself? Viewers know he has children, for example. Do you know much about them?

Miguel’s kids are about five years older than Jack and Rebecca’s kids. I can’t give away too many things because stuff is coming out in episodes to come, but that’s why Miguel and Shelly will sometimes give advice to Jack and Rebecca on raising kids. I can’t really comment on whether the kids know each other or are friends in their adult years. But he does have kids with Shelly. Good-looking kids too! Gorgeous kids. (Laughs.)