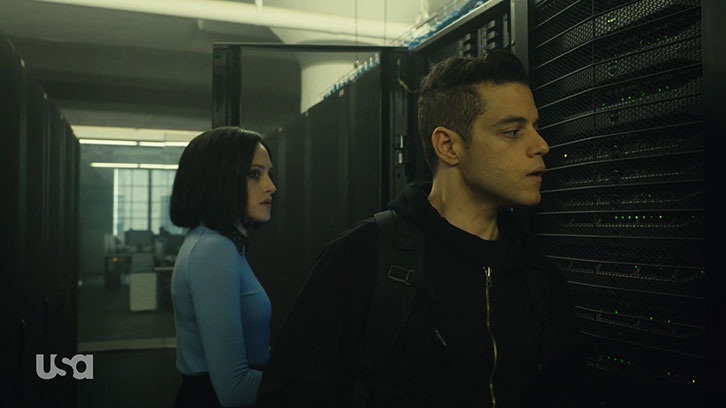 After a below par episode last week, Mr. Robot returned with another genuine all-time classic episode that will be remembered for years to come. This hour was an audiovisual epic - minus any speech except for a total of just twelve words uttered in two sentences, one at the top of the the episode, and the other at the bottom. Only music and visuals were used to tell the story of the remaining 99.9% of "405 Not Found", and they were both spectacularly well executed. Showrunner Sam Esmail wrote and directed this episode - though I'm sure the script wasn't too thick.

Just four storylines were developed in this episode, but the one that obviously stood out most was Elliot and Darlene breaking into Virtual Realty. Of the four, this one best suited the zero dialog approach. We watched as the siblings prepared to infiltrate Virtual Realty, with Darlene heading in first, distracting the staff member at the desk which allowed Elliot to sneak in and create a fake user account on the swipe card system. That allowed Darlene in, but not before she obtained a copy of the staff member's fingerprint by pretending to leave her phone behind.

The sequence that followed was as entertaining as it was realistic. By scanning the fingerprint and using Photoshop to tweak it into a format able to be 3D printed, Darlene was able to create her own copy of the fingerprint which allowed her and Elliot access to the servers. They were only just able to create a backdoor user account in the Cyprus National Bank's systems before their cover was blown. I have to say it was nice having staff members/guards/whatever you want to call them who were somewhat clued up, and able to put pieces of a puzzle together which allowed them to do enough to disrupt Elliot and Darlene. 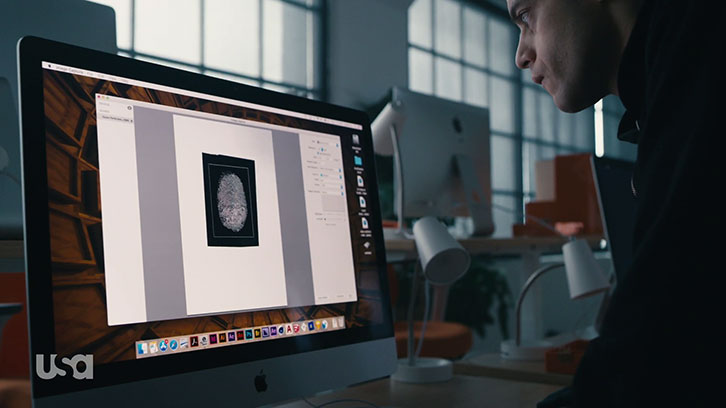 This eventually led to a long foot chase across Central Park for Elliot, who didn't enter Virtual Realty legitimately so had to flee on foot, whereas Darlene hadn't been spotted yet, but had also entered the facility legitimately so was able to leave undisturbed. Darlene later picked up Elliot after he jumped over a steep bank to escape the police. Interestingly it was only in the final seconds of the chase that backup arrived for the two officers who began the chase initially. Most people would agree that movies and TV shows tend to exaggerate the number of police responding to a crime scene or police chase, while I think this episode of Mr. Robot may have gone the other way.

In among all of this, it was actually Christmas Day. Dominique was content to while away the day on her own, but didn't get the chance thanks to Janice interrupting and ordering her to investigate the burned out Dark Army surveillance van which Elliot had torched right at the start of the episode. This led Darlene to the crime scene, then to the local police station where she created a distraction for one of the officers working at a desk, and placed a device which enabled remote access into the computer. Noticing a red light camera on the way from the crime scene, Dom pointed Janice in that direction, and sure enough, Janice came back with a picture of Darlene and Elliot in a car, caught by the camera. This was beautifully foreshadowed at the top of the hour, moments after Darlene picked Elliot up.

With Phillip Price having been absent from last week's episode, his storyline was a little harder to engage with, however fortunately it was relatively simple. He, too, was celebrating Christmas on his own, but he had more pressing issues on his mind, concerning the Deus Group's impending meeting. With Tyrell seemingly gone for good after being shot last week, Elliot texted Price telling him Tyrell would be absent. The meeting would proceed regardless, so then it was up to Price to follow a couple of clues leading to the location of the meeting. Meetings are a bit hard to have without being able to speak, so understandably that part will wait until next week. 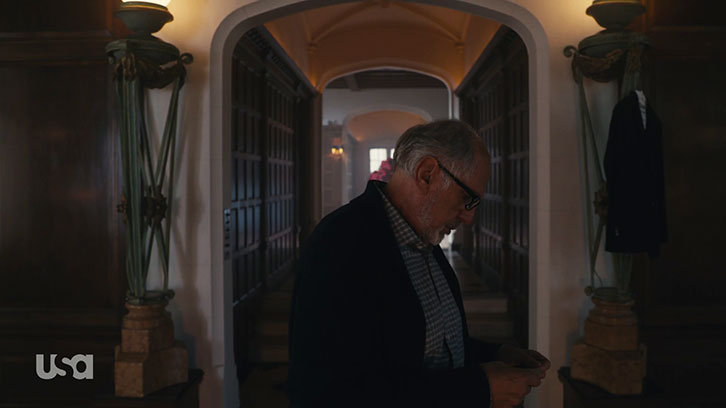 The fourth and final storyline followed Krista, who was seemingly having the most normal Christmas day. She was set to introduce her boyfriend to her family for the first time, and had been out shopping briefly. However on her doorstep she dropped her groceries only to find Vera standing over her. It was then that Vera uttered final last four words of the episode. Next week's promo doesn't bode well for Krista, with Vera still hellbent on his mission to recruit Elliot to assist him.


It's time we talked.

I think it's fair to say that all four storylines could quite easily have involved at least some speaking, so what was interesting was watching how Sam Esmail crafted those moments where one would expect dialog, but was barely avoided, often with the slimmest of margins. This was the case with Darlene and the Virtual Realty staff member early on, but during their time inside the premises, there was no need for dialog between Darlene and Elliot, especially when the staff member was on their tail as that would have given them away.

I was more impressed with how Dom's storyline managed this feat. Police are always communicating, whether it be to each other, on the phone, or over the radio, and to go from a silent crime scene, to a silent police station, to a silent family gathering - on Christmas day no less - was quite impressive. 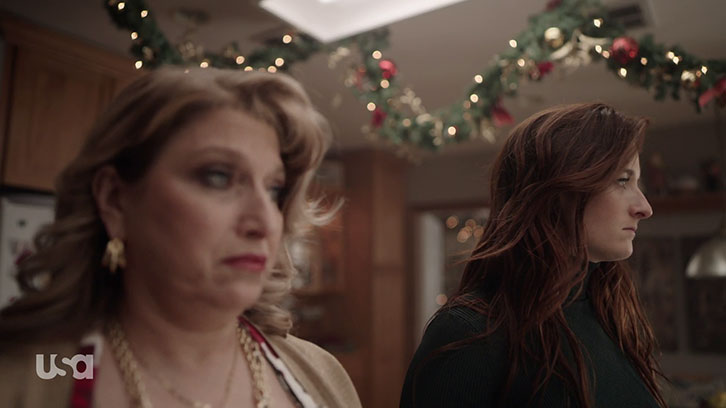 Being Christmas day, this gave the creative team a lot of flexibility from a music perspective. Christmas carols were used essentially as white noise on many occasions, whereas on almost any other day of the year, no other songs have any real relevance or belonging. The score was still critical throughout to convey intensity and urgency, particularly when we were following Elliot and Darlene, but given this is the standard expectation in even the most simplistic movie or TV show, this was probably the least impressive aspect of the hour.

In making up for the absence of dialog, the visuals were superb. There were so many moments which featured beautiful cinematography - too many to even contemplate listing. I got the sense that there was so much more thought put into the cinematography design than a usual episode - which is still very well thought out, mind you. Every shot in this hour had a purpose, and had a tangible message that it needed to convey, whether that be an emotion, or a story element. Elliot's police chase was covered with multiple high and wide angle shots, as opposed to the usual tight shots cut at high speed which are seen almost everywhere else for a similar scene. Long takes were used to build tension and convey proximity right throughout the Virtual Reality heist. And because there was no speaking, shots of cellphones displaying text messages were longer and more deliberate. 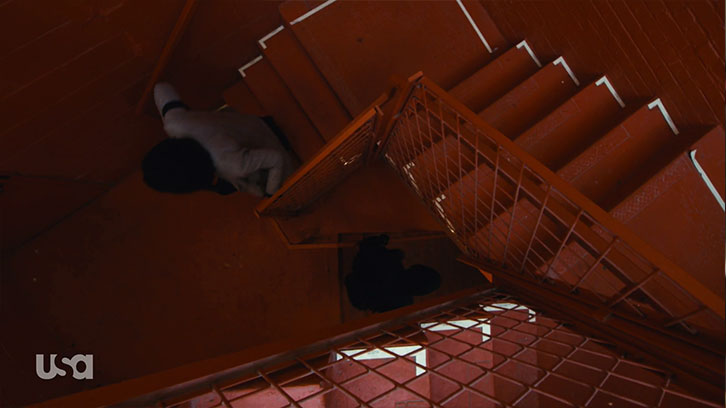 All up, this is yet another episode of this epic series which pushes the boundaries of what's possible in television. The creativity and execution right throughout this entire series are unparalleled, and no one else has even thought about attempting to recreate many of the one-off techniques this series has dreamed up and then executed with such perfection. Though several storylines were progressed forward in this episode, I don't really care about them at the moment. I'm just stoked I get to watch in awe the work of the creative genius that is Sam Esmail, and then come back to reality next week.

Thanks as always for reading! I'd love to hear your thoughts on this episode of Mr. Robot in the comments below. See you back here next week.