In this eleventh episode of the fantastic third season of Room 104, the most undervalued and strangely ignored late night HBO anthology series, we get yet another comedic installment with a Faustian twist. Unlike some of the previous wacky episodes, there was no dramatic side, even though things got pretty dark throughout the story. Also like some of the other episodes, though, I felt this particular story would've been better presented as a feature film rather than a 25 minute anthology episode. I will get into the more of that later in the review. This episode was written by Sam Bain and directed by Patrick Brice (who previously collaborated on Corporate Animals) who has directed no less than 3 episodes this season and doesn't let us down here.

In "Crossroads," we get know the character, Louis (Paul F. Tompkins), in what is supposed to be either 1969 or the 1970s, judging by the CRT television in Room 104. By the way Louis is dressed, it is safe to assume he is a lawyer of some kind. He seems to be meditating, but really is getting some sort of psychic transmission about the client he is about to meet (pay attention to the mini-Christmas tree positioned on the table by the window, there will be a test later!) This being an anthology show, we get the idea that this is not going to be just any client. Jean (Aislinn Paul) seems like an ordinary young woman, and that is exactly her problem; she doesn't want to be ordinary. Jean wants to live deliciously and isn't ashamed to be boisterous about it and Louis seems to be happy to grant her wish by making her sign away her immortal soul to...well...you probably already know.

I thought it was telling that Jean mentioned Robert Johnson, who supposedly sold his soul at a literal crossroads to become a guitar master before mysteriously dying young well before his time. The fact that Louis meets his clients in Room 104 probably isn't a coincidence. We already know from the season premiere that the motel was constructed on top of evil doings. Crossroads are typically seen as a inter-dimensional portal in stories wherein magic can exist and demons can be summoned. Motels are commonly seen as a place that isn't really "here nor there" where deals can be made discreetly, so mainstream society cannot frown upon them. The connection isn't hard to miss.

Jean gleefully signs her soul away to live the life of the rich and fabulous...and she does...for fifty long years. Cut to present day and Louis returns to Room 104 to conduct another meeting with Jean, now droll-fully played by Nebraska and frequent TV guest breakout June Squibb in her twilight years. Louis, of course, hasn't aged a day since that first meeting. Now, why they came to the conclusion that fifty years was enough fun for Jean to have before summoning her to live in Hades for eternity? I am not sure. Maybe the writer wanted to make some fun Black Sabbath references? Maybe they found the similar fame and fortune yearnings of millennials and Generation-Z to be too insufferable? Maybe they just wanted an mature woman to swear and do nasty things to her assistant in the motel room? One can only assume.

One thing that bothered me about the character of Jean is that she seems to be a constant contradiction. She claims she doesn't believe in a soul, yet she is fine with signing away her's without a second thought and reaping the benefits of a Faustian bargain without ever considering any potential negative consequences from such a deal. She doesn't think anything bad should ever happen to her, so she is willing to take the immortal place of Louis, who seems more and more unwilling to perform his duties. Jean doesn't even seem to question that he hasn't aged in 50 years as she negotiates with him. The nuances of this agreement do not quite work in the 25 minute format as there doesn't seem to be much of an arc for Jean to play. Her character doesn't learn anything or change much over the course of the story. The fact that she is self-centered is meant to be humorous, but just comes off as obnoxious and shallow.

The problem I had with Louis is that he has a total lack of darkness happening. He seems to be a victim of his occupation. How exactly did he get this job in the 1st place? This question is never answered and would've have been better explored in a feature film version. And why does Louis' supervisor give the OK for Jean to be the new Louis so quickly? All Jean does is dispatch of her assistant without hesitation. Seriously, any Hollywood star could do the same thing and no one would notice. Wouldn't Louis have a contract similar to the one Paul Williams had in Phantom of the Paradise? None of this is explored well and I found it increasingly difficult to buy into.

The ending of this too-short saga comes to an abrupt halt with the arrival of Beth (Lily Mae Harrington), an aspiring singer/musician. We see she has real talent, yet she is a more modern young woman than Jean ever was who cannot see past the labyrinthine algorithms to chart a successful music career without wanting to sign her own soul away - now to new-agent Jean.

Jean doesn't hesitate to sign her up to prove to Lucifer that he didn't make a mistake by hiring her. However, Louis sees more nuance and substance in her situation and asks Beth to sing "Oh, Christmas tree" (remember the Christmas tree from the beginning - it's paying off!) to show off her natural gift and end the episode on a uncharacteristically inspiring note. It seems that this plan of trying to convince Beth that she is too naturally talented to cheat her way to fame (unlike Jean) might fail since it seems to fail to melt Jean's cold heart (not like the Grinch) so she will end her attempts to get Beth's signature. We are not really sure where singing this song will lead since the episode suddenly ends in an ambiguous fashion, but, for me, it was the only really memorable and haunting thing about the episode. Again, the problem is that it felt rushed and not earned as a dramatic conclusion, much like Jean's sudden career change. It leaves me worrying that Room 104 has already aired its best episodes of the season, with very few great ideas left up its sleeve.

Next week's season finale still looks like a banger of a conclusion, though. 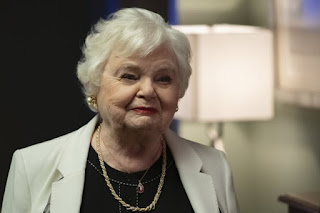