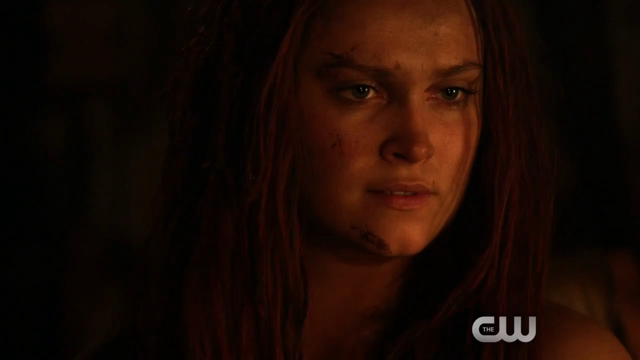 
What kind of threat is the Ice Nation versus last season’s The Tree People?

Ice Nation is hardcore. They are much more overtly violent and will solve their problems that way. Tree Crew’s had to fight and they’re badass too, but they’ve evolved a little bit more and are the good guys in that bipolar dynamic. They’ve joined Lexa’s (Alycia Debnam-Carey) coalition, become one of the clan because the threat of Mount Weather existed to all of them. But they didn’t want to be there. Nia (Brenda Strong), the leader of the Ice Nation hates Lexa and hates that they’re at that table. So when Clarke, in one day, took the threat of Mount Weather off the table, suddenly Ice Nation wondered well why the hell they were still in this thing. We enter the story at a time when that threat is out to rear its head in a big way. They all want Clarke because Clarke has the mantel of death, Wanheda. Wanheda is in the superstitious belief that if you kill Wanheda you control death. Everybody wants to do that and so she’s in trouble.

How important was it to show Bellamy moving on?

It was important that we saw that life moved on and that the people on the ground were trying to establish a real life and peace. That Bellamy could slow down for a minute and find somebody. We’ve seen him with other people before, it’s not like this is the first person he’s been with, but in terms of a relationship it’s the first one for sure. It’s a little hard to do something like that because we do a three-month time jump where you miss the first kiss and all the good stuff. It will bother some people probably but he deserves to be happy. Clarke left, she bailed on him and he feels betrayed by that. He didn’t know about her other “relationship” with Lexa either.

Was it important that escape be with another female character?

It was important to me that it was with a woman because I feel like Clarke is bisexual so she can be with anybody. In terms of relationships, sexually or romantically she could be with anybody, which is cool. It’s an advantage as a storyteller. We don’t have to take half of that cast off the board. But I think there was some debate as to whether or not she was bi or doing it because Lexa was somehow manipulating her, controlling her thoughts. I wanted it to be clear. It could have easily been like hot grounder, trading post guy instead.

Source:
Read More on THR
So it’s out there that Alycia Debnam-Carey is back in Season 3 as Lexa.

Yeah. It’s been a little tricky. For Alycia, we had to negotiate with AMC at the beginning of the season regarding how many episodes we needed her for.

Are you willing to say how many that is?

I don’t think that’s a good idea. I do think that she has been amazing. And if somebody came to me with the same request for one of our actors, I would do my best to make it work. Especially since this particular character preceded [her role on] “Fear the Walking Dead.” That’s always a concern when you have an actor in your show that is popping — that someone else is going to grab them and make them a series regular if you don’t. That’s kind of what happened in this case. You know we can’t compete on some level with the cache of a franchise like that, with the numbers.

Clarke and Lexa is something that is obviously huge to parts of the fandom of “The 100.” And of course, I understand why at the start of season three, Clarke was not in a place where she could really think about Lexa in a romantic way.

They were on a break.