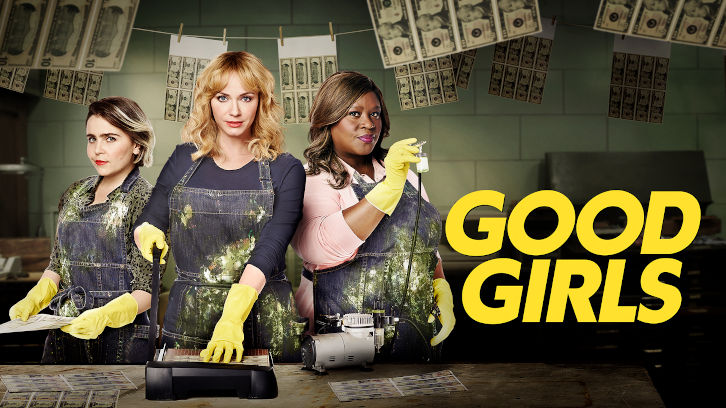 Let me first get my broken record spiel out of the way: too many people know about this. They now have not one, but two (!) hitmen involved in trying to take out a massive drug dealer, Max knows, and now Beth’s fingerprints are on a gun tied to Lucy’s death. Wonderful.

I can’t even kind of defend Beth in this situation, because while I understand the pressure, and I can’t imagine what I’d do if I was actually there, the second neither of those men took it out themselves I was like no, Beth, reach with your sleeve. Your sleeve. Pull your sleeve up, Beth. BETH. YOUR SLEEVE. Oh, Beth. You’ve done it now.

But, alas, here we are. And because of this, teamed with their nail polish color being recalled (thanks, Lauren Lapkus!) thus their ability to make more money being halted, they decide to delve into the art of… framing the poor? Yep, you heard that correctly. To hire the hitman, they actually need double what they thought they needed originally, so they need to steal nail polish from the only salon in their vicinity that has it.

As a refresher: They use a specific nail color from Ruby’s job at a nail salon to get the correct color for the bills and without it, they can’t seem to pass the bills off as real. They try different versions, but ultimately, they need this color to make the bills look exact. Even Rio notices when they’re wonky.

What Ruby does is not admirable, it’s upsetting and shameful, and she definitely feels it, but so does her daughter. She ends up recruiting her to help get the keys from the manager to get into the back room of the salon for the nail polish, and Sara (Lidya Jewett - Black Panther) lets her know exactly how she feels about it.

Ruby is rightfully upset at Sara being upset, because, as Ruby tells Sara, Ruby gave up everything for Sara. She started doing this so Sara could be healthy. So Sara could get the treatment, the surgeries, the medications she needed. Every kid has that moment of realization when everything your parents have ever done for you comes into sharp focus, and this was Sara’s. It was good for her to have, finally, and it was nice that we got to see Ruby finally talk to Sara instead of just admonish her… again. You know what that is? Growth!

Then we have Dean and Beth. Woof, am I right? I feel like I say that about them every week, but my goodness, can the writers not write them any other storylines? At least it’s gotten a little bit better, in the sense that it’s a little different than last time, but this marriage is on its last legs and it gets more and more obvious with every episode that passes.

This week, we see growth from Dean, and myself! Shocking, I know, seeing both of us grow together, but more shocking things have happened. Dean is upset when Beth has to bail on his celebration at work to meet someone, so he gets drunk at said celebration, and kisses his boss. Casual. What every person in a healthy marriage does when they’re upset at their spouse.

Here’s where he went from Old Dean to New Dean: when his boss tried to further advance it, he pushed her away and he went home. He packed a bag and told Beth right away the next morning. He explained that he didn’t want her, he wanted Beth, and he wanted Beth to ask him to stay. Which she did. Gag me.

Here’s where my growth comes in: I’m not that mad at Dean. Is what he did awful? Yes, fully, 100%, I still hate him. Who I am mad at is the writers. Why can’t they write him a better storyline? Why do they write Beth as this take-no-crap woman and then have her turn around and consistently take back a man who has proven time and time again that he will revert to old ways?

This time was different, I understand that. I understand that this time it was just a kiss and that he didn’t allow it to go further. But what happens if next time Beth misses one of the kids’ concerts because she has to go meet Rio for a money drop? Will Dean “just kiss” a mother? Will he “just” get handsy with a teacher? When does Beth finally say enough is enough and just leave him for someone she knows for sure isn’t going to come home one day and tell her he cheated on her?

Time to talk about my least favorite part of the entire episode: Annie’s entire arc. This episode for her was just… bad. The chase, in relationships, is always a thrill, but why, when women say “no means no”, are men seen as creepy when they chase, and women, like Annie, seen as flirty and fun? This is weird. Annie is being weird.

Josh is a man with a girlfriend. Sure, they’re not right for each other. It’s weird that they don’t really sleep together, and it’s strange that they live their lives essentially in a spreadsheet, but if that’s what they want, why can’t Annie just respect that? Oh, right, because Annie isn’t the one getting to sleep with Josh.

Annie’s entire thing of calling her (married with a newborn!) ex over, asking him why he liked her and then trying to sleep with him was weird, and if the roles were reversed he would be seen as super creepy. I love Annie so much, but if the writers can’t figure out how to write her as an interesting character without making her entire arcs be about love interests, then they need to go back to the drawing board on her.

Overall, it was a pretty okay episode, and I think it was a good setup for what the rest of the season will be and what it will focus on. I just hope they can get Annie and Beth out of these ruts they seem to be in.

My favorite scene was the very beginning when we get a side by side of Beth and Phoebe (Lauren Lapkus - Orange Is the New Black) getting ready in the morning. The stark contrast between the two is genuinely funny to see, but also I’m a little bit worried about Phoebe. I know she's going after our girls, but can someone check on her? Thanks.

My favorite quote from the episode comes from Rio when he looks at Beth and says “I don’t know how to incentivize you anymore.” It’s such a simple line, but the way he delivers it is just… breathtaking, you know?

What did you guys think of the episode? Did you agree with Beth to let Dean stay? Did you like that Ruby told Sara about why Ruby does what she does? Am I the only one who thinks Phoebe needs a hug? Let me know what you think in the comments!