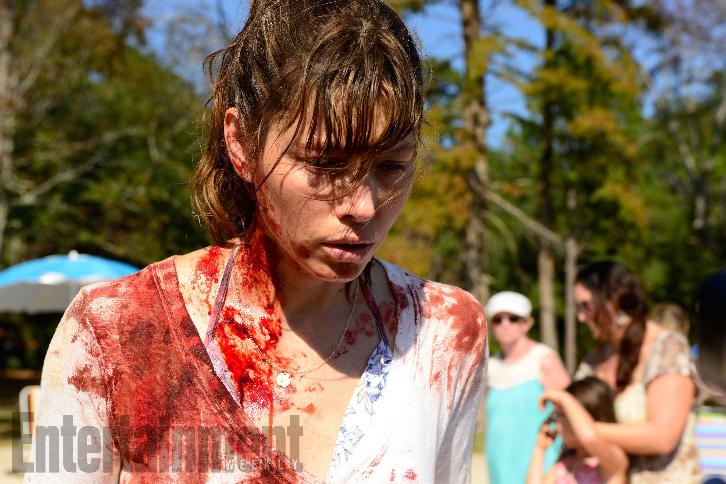 Based on the international best seller, #TheSinner stars @JessicaBiel and Bill Pullman. Witness the premiere August 2 on @USA_Network. pic.twitter.com/idP7WCtqJI

Poster
Thanks to Pawe? for the heads up.

New Promo - Everyone Knows What She Did

Everyone knows she did it. No one knows why. @JessicaBiel stars in #TheSinner, premiering August 2 on @USA_Network. pic.twitter.com/mXTehH3yu8

#TheSinner's @JessicaBiel takes you inside the mind of Cora Tannetti. The full story unfolds August 2 on @USA_Network. pic.twitter.com/DOhbd7Mux2

Starring and executive produced by Jessica Biel, The Sinner follows a young mother who, when overcome by an inexplicable fit of rage, commits a startling act of violence and to her horror, has no idea why. Detective Harry Ambrose (Bill Pullman) finds himself obsessed with uncovering the woman’s buried motive. Based on Petra Hammesfahr’s book of the same name, the eight-episode crime thriller’s driving force is not the “who” or the “what” — but the “why.” The series was created by showrunner and executive producer Derek Simonds with Charlie Gogolak also serving as executive producer. For Iron Ocean, Biel and Michelle Purple serve as executive producers. Antonio Campos executive produced and directed the pilot. The series is from Universal Cable Productions.

First Look Promo
Thanks to Who Shot J.R.? for the heads up.

Executive produced by the actress herself, the first season of USA’s anthology drama The Sinner follows a young mother named Cora (Biel) who is overcome by a fit rage and commits a startling act of violence. The mother is horrified because she doesn’t know why she did it, and that’s the question that will drive the season. Bill Pullman (pictured below) plays Detective Harry Ambrose, who becomes obsessed with uncovering Cora’s motives and works with her to probe the depths of her psyche and the violent secrets hidden from her past.

The Sinner, which is set to air on USA Network this summer.