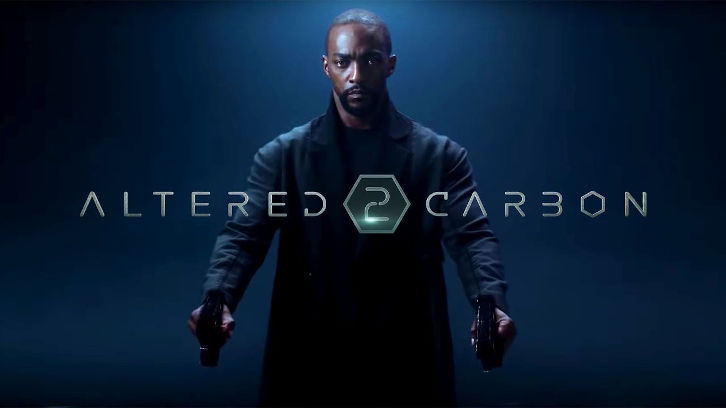 Character descriptions are below:

ANTHONY MACKIE is TAKESHI KOVACS
A former Protectorate CTAC soldier who became a revolutionary Envoy, and then a mercenary for hire, Kovacs swears allegiance to no man or woman except one: Quellcrist Falconer. His undying quest to reconnect with her spans multiple centuries, planets and sleeves.

RENÉE ELISE GOLDSBERRY as QUELLCRIST FALCONER
A fierce revolutionary leader with a deep bond to Takeshi Kovacs, Quell is driven by her desire to reset the balance between life and death.

CHRIS CONNER as POE
A centuries-old, highly-evolved A.I. and loyal companion to Takeshi Kovacs, Poe strives to understand what it means to be human.

SIMONE MISSICK is TREPP
An expert bounty hunter, Trepp is known for her ability to track down anyone in the Settled Worlds, for the right price.

TORBEN LIEBRECHT as COLONEL IVAN CARRERA
The dogged leader of a Protectorate Special Forces unit known as the “Wedge,” Colonel Carrera is on the hunt for Takeshi Kovacs.

JAMES SAITO is TANASEDA HIDEKI
A centuries-old Yakuza boss, Tanaseda controls organized crime on the planet of Harlan’s World and shares a history with Takeshi Kovacs.

Based on the classic science fiction novels by Richard K. Morgan, ALTERED CARBON is from Skydance Television. Alison Schapker, Laeta Kalogridis and James Middleton serve as executive producers for the series, alongside David Ellison, Dana Goldberg and Marcy Ross for Skydance.