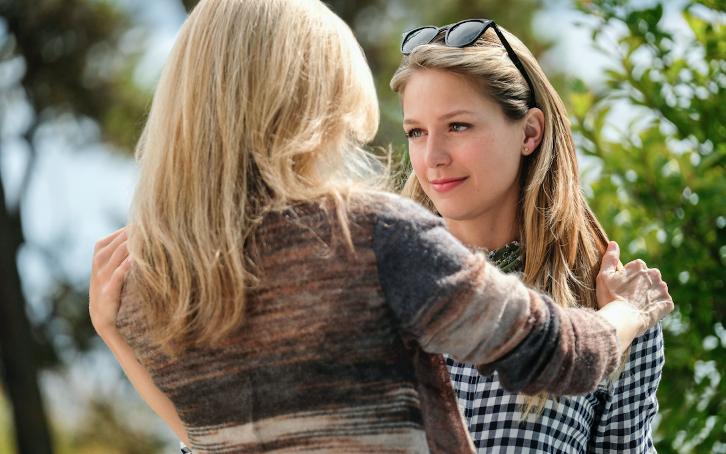 EW Interview
The story line is part and parcel of the show trying to return to the sister dynamic that drove much of the first season, but was less prevalent in season 2. “I can’t tell you how happy I am about that,” Leigh says. “I’m so grateful for all of the Sanvers stuff, I will never not be supportive of that and just so grateful of that journey. But there’s a part of it that was really like, ‘I miss working with Melissa!’ In season 2, it’s almost like people sort of got sectioned off — it was like Kara and Mon-El, Hank and M’gann, and then it’s me and Maggie, and then it’s Winn and James.”

“Maybe the two of them got so involved in their romances last season,” Benoist adds, “which was wonderful and we need to discover that as people ourselves, but this season you’ll see them both support each other in loss. It’s only fitting that Kara runs into the fray for Alex because that’s what they do for each other. She just went through the same and Alex was there for her. Honestly, those have been my favorite scenes to shoot thus far this season just because Chyler and I have a really special relationship and we care about each other a lot. That kind of bleeds into the scenes.”


Source:
Read More On EW
Melissa Benoist Teases Legion & Braniac
Thanks to Michelle for the heads up.

As for the Legion, Benoist joked that, given the number of hints Supergirl has dropped over the last two and a bit seasons, the announcement of their arrival probably didn't come as a major surprise to most fans.

"I don't want to tease too much," said Benoist, "but the fact that the Legion is coming to the show has such a hold in the comic book world, especially with Superman, Martian Manhunter, specifically. That's really exciting for us. For Kara, it's a brand new set of problems that you'll see pretty quickly."

When asked if Kara might have a romantic connection with Brainiac 5 (played here by Jesse Rath), as she does in the comics, Benoist said: "We've only just introduced the two of them. What we're working on now. I can't really tease anything. I think my lips have to be sealed on that one."

EW Interview
For the record, had Lima decided to stick around, wedding bells would likely have been ringing by the fall finale. “In terms of what we would’ve done, we knew fairly early on in breaking season 3 that Floriana wasn’t going to be with us for more than a handful of episodes, so we never really sat down and really tried to figure out what would the story line for the two of them be other than we had a vague notion of episode 9, the midseason finale, being their wedding,” Kreisberg says. “But we didn’t really get too far down that road, as I said, because it was never really a reality for us.”