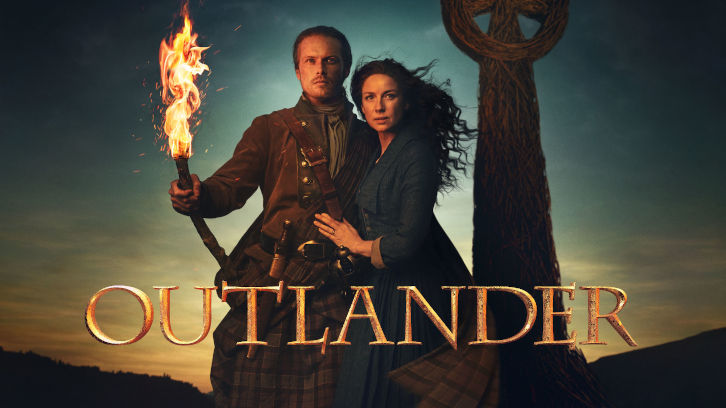 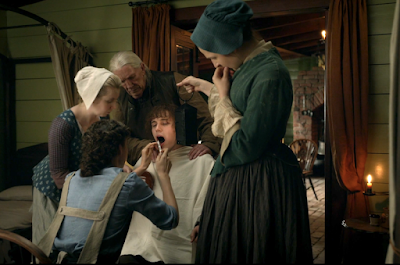 Claire has returned to Fraser’s Ridge to continue her work on "inventing" penicillin. She is slowly getting frustrated as none of the mold she grows is the kind of fungus she needs. She is not very hopeful when she, once again, inspects the mold under the microscope. This time, however, the mold has the color and the structure of penicillin! She did it! She invited a life-saving antibiotic! Eureka!

It is now possible for her to conduct the tonsillectomies on Keziah and Josiah. However, Claire worries as a small but significant amount of people are allergic to penicillin. It can be tested, however, false positives are not uncommon. She's had an experience with a false positive in the past (future!?!) and lost a patient because of it. To her great relief, neither twin shows any sign of an allergic reaction. 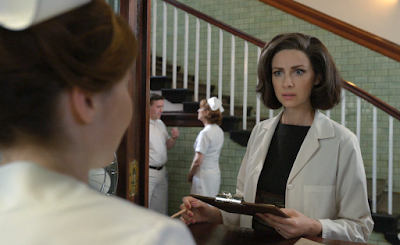 Throughout the episode, we see flashbacks of Claire’s time in Boston as a doctor. She connects to one of her patients, Graham Menzies, at a somewhat more personal level. They have a lot in common. He is Scottish, and at heart so is she. He has lost his wife who he had adored, she has lost Jamie. The man came in for a routine surgery and died of an allergic reaction to penicillin. Losing this particular patient hits Claire hard. She believes this man was a sign, that many things happening to her are signs that point her in a direction she cannot yet pinpoint. She talks to a friend and fellow doctor about the patient and about her feeling that the universe is trying to tell her something. His advice pushes her in the right direction: 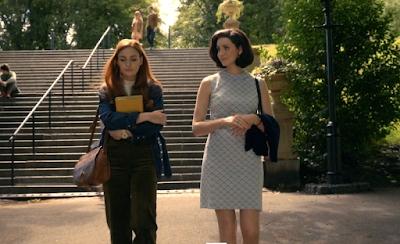 Everything has been pointing her toward Jamie, toward Scotland, toward the stones. She realizes she needs to go back, she needs to return to the UK, she needs to bring along Brianna and tell her the truth. This entire story around her Scottish patient showed us how Claire found her way back to Jamie and how she defied time once more.

This episode was particularly heavy on the magnificently written and beautifully spoken monologue in which Claire reflects about time and compares it to God. God the eternal. God the infinite. God who cannot be seen or heard. Just like time.

Claire: Someday I will stand before God. And I will receive answers to all my questions about everything in his universe. And I do have many questions. But I won’t ask about the nature of time. I have lived it. 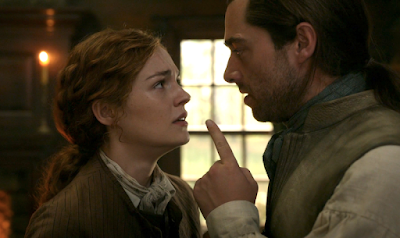 Together with Claire, Roger has returned home as well. His happy reunion with Brianna turns into drama pretty quickly when he finds a diamond he knows very well in his wife's jewelry box. Bonnet’s diamond. The diamond Bonnet would have sold his own mother for. He does not understand how Brianna came into possession of the jewel and demands an explanation. His wife confesses that Bonnet has gifted it to her. For Jemmy. Believing he was about to die, she told him that he is the father of her child. She still does not actually know who her son’s biological father is but she decided to tell Bonnet the child is his when she visited him in prison before his execution. She wanted to give him some comfort, she wanted to let him know something of his will continue to live. She had just been kind to a dying man. 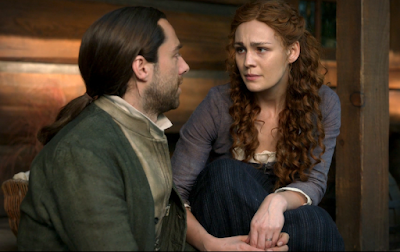 Roger is upset and storms off in anger. Only after a talk with Claire about marriages and how complex they can be he manages to calm down again. He brings Brianna mushrooms as a peace offering and the two of them finally talk. They are finally honest with each other. Brianna tells Roger that Bonnet is still alive and that she is terrified he will come for her and Jemmy. She confesses that the face of her rapist haunts her wherever she goes. Roger is understanding and promises her that they will return to their own time the moment they know Jemmy can travel through the stones. They will walk away from the despicable being that is Steven Bonnet. But who says thoughts of Bonnet won’t haunt Brianna once they are back in the 1970s? The physical man won’t be there but Brianna’s PTSD won’t just go away. Apart from that Brianna does not actually want to return to the future, not without the rest of her family that is. Every time the option of going back was brought up she clearly indicated that it is not what she wants. Going back certainly is the safest option they have but I very much doubt it would make them happy.

In the meantime, Jamie and his men have reached the next village where they initially planned to recruit even more men for their cause. However, when Jamie runs into Lt. Knox, the man informs him that all of the regulators had been given a pardon by Governor Tyron. Except for Murtagh. So the hunt for Jamie's godfather continues, however, Jamie's help won't be needed anymore. 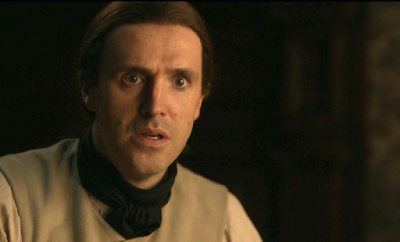 In his ambition to find Murtagh, Knox has requested a list of all people who were imprisoned together with the Scotsman in Ardsmuir. He suspects that some of the men Fitzgibbons has been imprisoned with might be hiding him. Jamie knows his own name would be on that list and decides to tell Knox in advance.
At first, the lieutenant does not believe him, after all, he admires Jamie and looks up to him. However, once he sees Jamie's name on the list with his own eyes he pulls his knife and calls for Jamie’s arrest. Forgotten are all the times Jamie helped him. To Knox, Colonel Fraser is a traitor of the Crown. 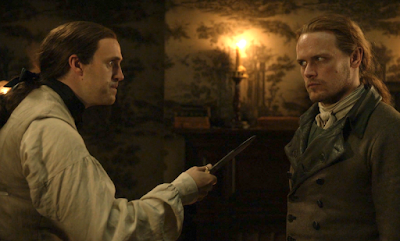 Jamie tries to make the Lieutenant understand that he is in between two fires. He tries his very best to be faithful to the Crown but his family will always come first. And Murtagh is family. Knox does not care for Jamie’s explanations and is set on having him arrested. The Scot has no other option to silence Knox but to kill him. He strangles him, removes his shoes and puts him into his bed to make it look as if he had died in his sleep. He burns the list with his and Murtagh's name on it. To prevent any and all suspicion that his death could have been anything but an accident, he sets the room on fire. This way people will believe Knox suffocated from the smoke while sleeping.

For Jamie taking a life is a last resort. If there is anything else he can do he will. This time however there was no out. He had ended a life to make sure his family remains safe. A decision that he certainly will question and struggle with in the next episodes. 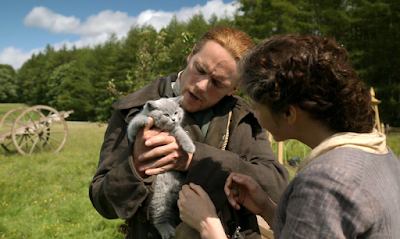 When Jamie returns home he comes bearing gifts: He encountered a little, hungry kitten searching for milk and decided to bring it home with him. He gifts the cat -Adso- to Claire who falls in love with him immediately. And so did the audience.

The couple is relieved to be together again. Jamie has a lot to tell her.

What were your favorites moments of the episode? Let us know in the comments below!