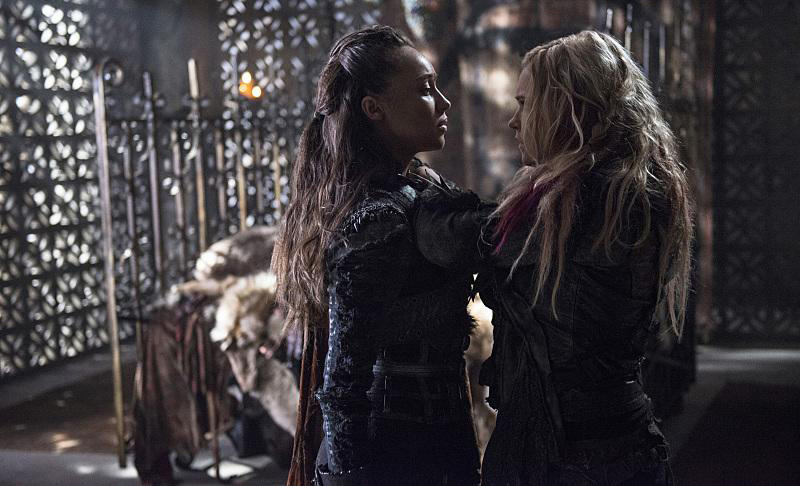 The weeks are flying by in the third season of The 100. The third episode, titled "Ye Who Enter Here" was quite different to the norm, with the more intense action scenes taking a back seat to some serious story development. Director Antonio Negret and writer Kim Shumway delivered an hour which had its share of confusing moments, but did well to leave the series in arguably a better place than the two part season premieres managed to.

Politics and power were the foundation of tonight's episode. Alycia Debnam-Carey was in the hot seat for the entire hour, and did an excellent job playing Lexa throughout. Atop the tower in the opening scene, it is made very clear by Clarke to Lexa and to us as viewers that Clarke still bears significant resentment toward Lexa for abandoning the battle at Mount Weather. Though Clarke doesn't warm to the idea at all, Lexa reveals that one of her motives for capturing Clarke is to encourage the Sky Crew to join the coalition of clans she leads.

Clarke sees right through Lexa's plan, and makes it clear to her that she is only suggesting this as a way to improve her public image, particularly to the clans that make up the coalition. It prompts her to throw one of the members of the meeting in the next scene off the top of the tower in an attempt to cement her authority.

Kane and Abby saw some additional screen time in this episode thanks to the absence of the City of Light storyline and Monty and Jasper. They began the hour on the city limits of Polis, awaiting escort to the tower. Along the way, it was abundantly clear how Kane has changed since the first season where, while on board the Ark, was one everyone had to keep an eye on. In a surprise move while stopping for some rather gross looking local cuisine, Abby, noting Kane's gift as a diplomat, attempted to hand him the Chancellor's pin. More surprising than that was Kane declining the offer, and suggesting an election instead. The Kane we all knew from season 1 wouldn't have needed another invitation to accept the role. 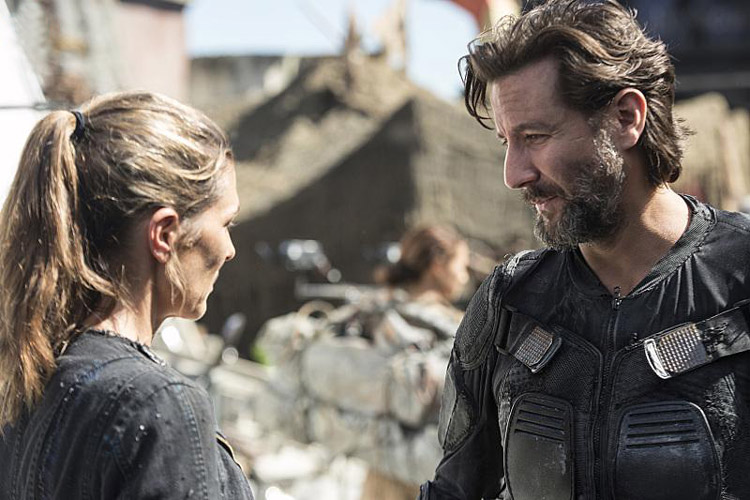 Having been introduced for the first time last week, members of Farm Station, in particular Charles Pike, had a much quieter hour than I expected, though it didn't end very well to be fair. Around three dozen Farm Station members were making themselves at home inside Mount Weather, contrary to the treaty the Sky Crew signed with the Grounders. Raven, Bellamy, Gina and Octavia visited the base, with Raven and Gina spending their time attempting to bring the base's utilities and defenses back online.

While Octavia and Bellamy stepped out, Echo appeared, captured in the forest by guards. She had an ominous warning for the siblings:

The summit is a trap. The assassin is already there. At sundown your people will die.

Sensing that those who had left for Polis were walking into a trap, Bellamy, Octavia and Pike mobilized in an attempt to prevent them entering the coalition with the Grounders before it was too late.

In a nutshell, the assassin was real, and ended up brutally stabbing Gina while her, Raven and Sinclair were scouring the bowels of Mount Weather looking for the launch codes to the warheads inside the base. The assassin armed the self destruct feature the base had, which blew the base up, vapourizing the three dozen Farm Station members inside, along with all the priceless medical equipment and supplies which had been the cause of its fair share of tension in the season premiere.

Just quietly, I'm pleased Mount Weather is at least gone for now, if not gone for good.

Reintroducing Echo into the equation was a surprising move by the creative team. She is a Grounder who spent time inside Mount Weather during the time the Mountain Men reigned supreme, but she is now loyal to the Ice Nation. In the final scene of the episode, Echo returns to the woods where the Ice Nation reside, and we see Queen Nia for the first time. It's now clear that a sizable chunk of this third season will center around the power struggle between Lexa and Queen Nia for the title of Commander of the 12 Clans.

With news of Mount Weather's destruction reaching the tower via Octavia and Bellamy, where Clarke and Lexa along with Abby and Kane were in a summit meeting, the Ice Nation summit members immediately claim responsibility for the attack.

This is an act of war.

With Kane and Abby's approval, Clarke opts to stay in Polis with Lexa to formulate a plan of attack and to ensure Lexa stays in line. In the episode's most touching moment, Bellamy yet again attempts to convince Clarke to leave the fight to someone else, but deep down he always expected she would do the opposite:

She left us to die in that mountain. She will always put her people first.

What happened after this was incredibly fascinating. Alone in the tower that night, Lexa knelt before Clarke. While kneeling before Wanheda, Lexa said this:

I vow to treat your needs as my own, and your people as my people. 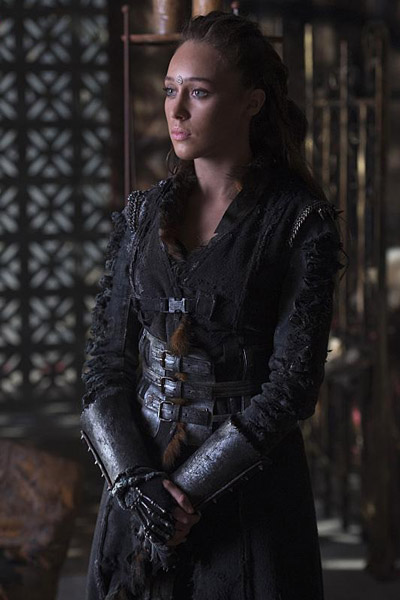 For all intents and purposes, this now makes Clarke the Commander of the 12 Clans. While Lexa remains the face of the leadership, displaying such trust in Clarke is as massive sign of respect. If Lexa doesn't survive the impending war with the Ice Nation, she has already chosen her heir. It's important to remember that both Lexa and Clarke each received advice that they should kill the other, with Clarke almost going through with it. The fact that they didn't suggests that, for now, the bond they used to have before their relationship soured is helping them return to good terms.

In all, while "Ye Who Enter Here" contained much more politics than normal, I get the feeling that things are starting to shape up as a few more pieces of the puzzle drop into place. Some of the confusion has been alleviated, though it's episodes like this where the rewind functionality should be worshipped in order to absorb every detail. An interesting side note is that I enjoyed this episode much more without the City of Light storyline squeezed in on top of everything. You know a storyline isn't fitting in too well when an episode is better without it.

The acting performances from the cast were also very good all round, but Alycia Debnam-Carey wins the night for me with what I think is her strongest outing on The 100 yet. There was some beautiful camera angles, scores and cinematography scattered throughout, and the absent City of Light and Jasper and Monty gave this episode much more room to breathe.

Thanks so much for reading! This was a pretty tricky review because of the episode's complexity, so I've skipped over a few less important aspects of the story so don't forget to share your thoughts and theories on the episode in the comments below, and rate the episode in the poll!

About the Author - Jimmy Ryan