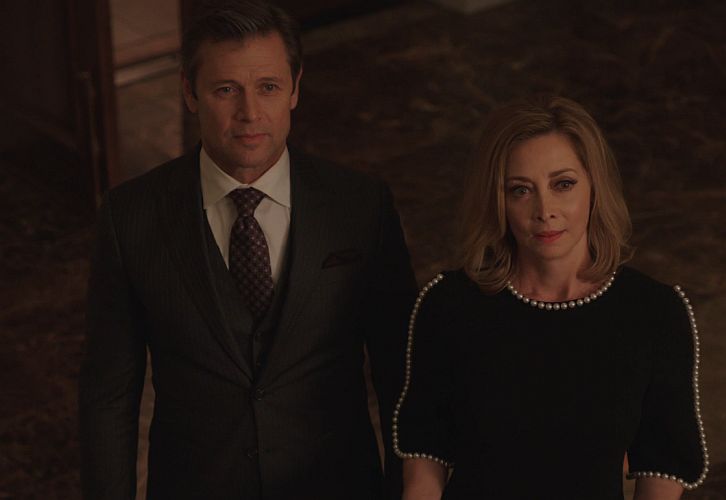 Considering how much chaos the Carringtons and company cause on “Dynasty” this week, no one could blame her if “She Cancelled...” on them.

So since we last saw him, Blake has seemingly decided to accept Laura Van Kirk’s proposal – blow up Fallon and Liam’s engagement in exchange for his company back. “Fallon can always find another fiancé,” he coldly assures Laura, “but there’s only one Carrington Atlantic.” Interestingly, we learn there’s a business reason behind Laura’s meddling. She’s working on a deal to open up the oil market in Moldavia (a country which should ring a bell with fans of the classic series!) and, were Liam to marry before it’s closed, he could potentially derail it with the large block of VKI shares he’ll receive (...wouldn’t he have gotten those when he and Fallon got married the first time? Anyway.). So Blake explains that he plans to use the power of first love to their advantage, by using Fallon’s romantic history with Culhane to drive a wedge between Carrington and Van Kirk.

And as the episode proceeds, it seems to be a winning strategy. First, a game of golf gives Blake the opportunity to pour some poison in Liam’s ear about Fallon’s feelings for Culhane, how he was there for her during Liam’s amnesia (remember that?). And later, after luring her son to lunch, Laura and her soapy pearl-embroidered ensemble keep pressure on that jealousy bruise, while also convincing him to let her help with a wedding task. Springing said assistance on an already stressed Fallon (more on that in a bit) sparks a huge fight between the betrothed, which their parents witness with barely-disguised glee. Blake and Laura then sneak into Culhane’s birthday bash (also more on that in a bit) to watch the encore, which is Liam misinterpreting a moment between Fallon and Culhane and confronting her about it. And as they fight anew, it looks like mission accomplished for Blake and Laura.

Except! Back at the Carrington manse, we awesomely discover that Blake tipped off Fallon and Liam about Laura’s scheme and that the trio – with Culhane’s help – teamed up to set her up. Love it. And so, satisfied that Blake held up his end of the bargain, Laura shows up in Blake’s study to tell him she’s firing the CEO that Jeff and Alexis have been blackmailing, clearing the way for him to reacquire CA. But that’s not the only move she’s there to make. It’s been clear all episode that the “Carrington cunning” was turning Laura on. And Blake in turn seemed hot for Laura’s ruthlessness. But still, it’s a bit of a soapy shock...when they start making out! 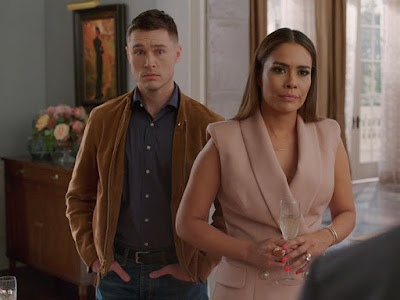 What will Cristal think about this? Well, she’s got her own fidelity problems. As she plans a fundraising gala for her veterans’ clinic with Father Collins, it’s clear her flirtation with the chaplain is unsettling her. Cristal tries to put some personal distance between them by putting some professional distance between them, but that’s squashed by Adam (and sidebar – after all the liver nonsense last week, Jeff is convalescing off-screen while Adam is ridiculously already up and at ‘em. He even takes a glass of champagne during a menu tasting, what the hell!). It turns out Adam has been appointed as the hospital board’s liaison to the project and he insists that Father Collins remain actively involved. Cristal tries to circumvent that request, but is so obvious about it that Father Collins confronts her. They both confess to their forbidden feelings...and then they start making out! And, I mean, Daniella Alonso and Wil Traval do have some chemistry...but Cristal vowed to be a better person two episodes ago and met this priest one episode ago so it all feels little rushed. I am intrigued by the cliffhanger of Adam spying them locking lips. Given both Cristal and Blake treated Adam like crap this week, I can only imagine what kind of revenge Adam plans to cook up with this illicit information on his stepmother.

Meanwhile, his sister Fallon – when not dealing with her future mother-in-law’s antics – is mired in drama with their own mother. She’s first annoyed when her attempts to get a celebrity designer to make her wedding gown is foiled when she’s branded a “horrible boss” by the Internet. She’s agitated further when, while doing a podcast interview to try and reverse the damage, Alexis crashes the studio and steals the spotlight. And she’s apocalyptic when “Aunt Alexis” and her “cool mom” advice becomes a hit. But in the end, Fallon decides to stop letting past hurts inform her current behavior, and even hires Alexis to give her guidance under the Fallon Unlimited banner. 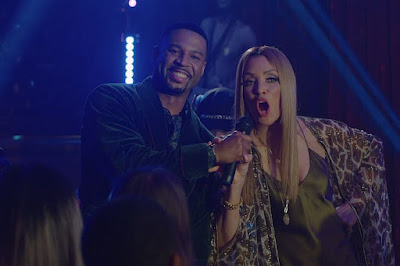 Lastly (because the super boring Sam/Kirby subplot re: Ramy isn’t worth talking about), let’s back up to the birthday boy. Dominique barges in on Culhane and Vanessa and talks them into having a sexy pajama party at Club Colby to celebrate, partially for “House of Deveraux” and partially because she is potentially launching a sleepwear line called “Doma-sleek by Dominique” (queen). Culhane actually doesn’t mind the imposition because he smartly has been thinking about how to use the show to benefit his own business, but he still isn’t sure if Vanessa is being sincere about their relationship. When she pops by his office sans cameras to give him a present and an out if he doesn’t want the party, he starts to think he can trust her. But having earlier aroused Anders’ suspicions, the Carrington majordomo gives Culhane a gift of his own – video proof that Dom and Vanessa are playing him. I’m actually pretty curious to see how Culhane will try and turn the tables on them.

Which storyline in “She Cancelled...” would you have given the axe? Come take a swing at this week’s “Dynasty” in the comments section.