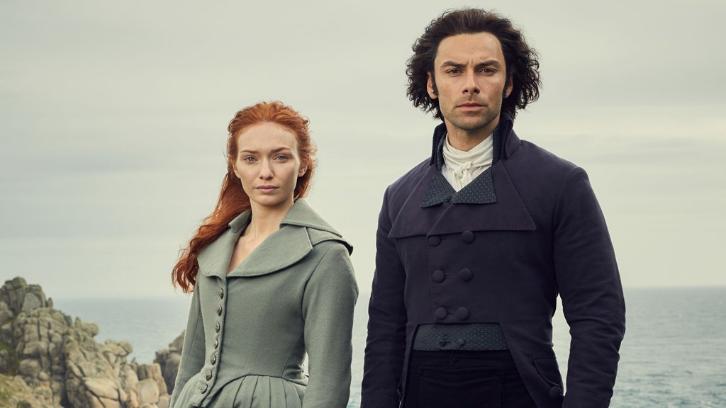 4.02 - Press Release + Photo
The Poldarks determine to get their relationship back on track and the Enyses announce they’re with child.
Hugh’s worsening health threatens his chance to stand in the election however, and the prospect of him remaining in Cornwall adds pressure to the Poldark’s fragile marriage. At the Sawle Feast, Tom Harry (Turlough Convery) challenges Sam (Tom York) to a wrestling match. When Emma (Ciara Charteris) offers herself as the prize, Sam accepts.

To everyone’s horror Hugh continues to worsen and remains unfit to stand in the election. Falmouth offers the candidacy to Ross (Aidan Turner) but will he accept?

While Ross watches Cornwall suffer under the power of Truro’s MP, George Warleggan (Jack Farthing), Demelza’s infidelity leaves her torn between her husband and a lovesick Hugh, who is set to rival George in the upcoming election.

The Enyses contemplate having a child and Elizabeth seeks the same to secure her marriage. Meanwhile, Morwenna (Ellise Chappell) uses Osborne’s (Christian Brassington) affair with her sister Rowella (Esme Coy) to keep the reverend’s advances at bay, and Demelza seeks to reconcile rival local Lords Falmouth and Basset.

A corn riot erupts in Truro, and Zacky’s (Tristan Sturrock) son Jago (Jack Riddiford) leads the charge. Sam Carne (Tom York) and Drake Carne (Harry Richardson) attempt to dissuade him but arrive too late, and a merchant is killed in the fighting. Tom Harry (Turlough Convery) tells George that the Carnes and Jago murdered the man, and Ross finds himself powerless to save his brothers-in-law...