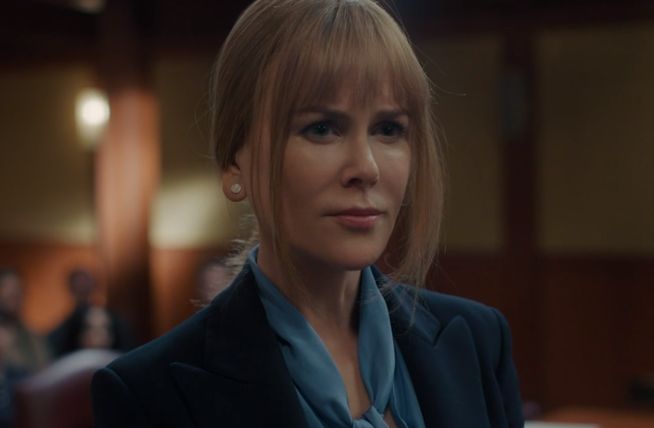 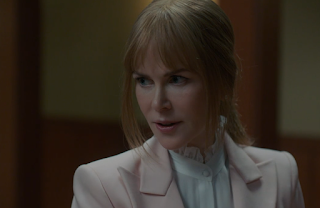 Nicole Kidman's depiction of Celeste Wright in season one of Big Little Lies was a highlight for critics and viewers alike. In season two, Celeste has to deal with the fallout of her abusive husband Perry's death. The biggest hurdles to regaining control of her own life are her suspicious mother-in-law Mary Louise (Meryl Streep) and her own doubts about her role in Perry's death. Celeste repeatedly revisits her happy memories of her husband, and she's weakened by her internal struggle, opening the door for her mother-in-law to challenge her for custody of her sons. Kidman imbues this battle with elegant dignity. Her performance is so wonderfully multi-faceted that even the smallest ways that Celeste gains ground resonate as meaningful victories. Her mesmerizing work in I Want to Know was voted by the SpoilerTV Staff as July's Outstanding Performer of the Month. 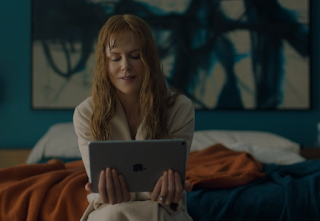 The morning she will face Mary-Louise in court for the last time before the judge's decision finds Celeste in a raw place. She numbly showers, while replaying tender moments with Perry in her mind. Kidman projects this emptiness out of her eyes that tells us Celeste is letting herself slide down the rabbit hole again. Her normal rituals of preparing herself for the day ring hollow, because her mind is so clearly elsewhere. She starts watching family videos on an iPad, lingering on the ones with Perry smiling and playing with their sons. We see her soften almost to tears, and Kidman lets the guilt and grief sit in place in her expression. Celeste switches to another video, one we don't see, but we see her quizzical look as this footage seems unfamiliar. We see her recoil from what she watches next as if something ugly and awful just crawled out of the screen at her. The placid daze is gone from her eyes, and she seems to have awoken from a pleasant dream into something much harsher. Kidman does something important with this transition, as she doesn't let Celeste shrink in the face of this discovery. She doesn't look away from it, and that action signals that Celeste is accepting what she's seeing and reconciling herself to it. 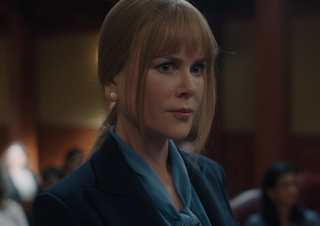 Seeing Kidman and Streep face-off was one of the most anticipated scenes of the second season, but the show subverts expectations in this episode by letting Celeste figuratively overpower her foe. She layers her careful cross-examination of Mary-Louise with a kindness that speaks to Celeste's professional side. She is always impeccably composed but also bristling with electricity as she waits for Mary-Louise's responses. We never doubt for a second that we are watching Celeste hunt, and her mother-in-law is the prey. There's no more thrilling scene in the second season than this quiet, tense exchange. Celeste hovers about the witness stand, carefully firing off her questions then punctuating them with strategic empathetic follow-ups to lure Mary-Louise into saying exactly what Celeste needs her to. The tidiness of Kidman's delivery doesn't mean she holds off completely from dramatic flair. Her voice gets quieter, but her tone gets more triumphant. When she asks Mary-Louise if she blamed Perry for his brother's death, there's a whoosh in the nearly whispered delivery of the question. You hear the satisfaction in Kidman's voice as Celeste lands a killing blow. Just when Mary-Louise thinks she has escaped the first trap, she walks neatly into the real trap Celeste laid. Mary-Louise says her son wasn't an abuser and lays the blame on Celeste. With one quick motion, Kidman snatches up a remote off her desk and hits play on a video of Perry brutalizing Celeste. We've already seen Celeste react to the footage. As the courtroom recoils just as she did earlier, Celeste sets the remote down with a hard snap. She walks up to face Mary-Louise, and her near-whisper is angry. She tells Mary-Louise this was her son, and there's compassion in her tone, despite everything. 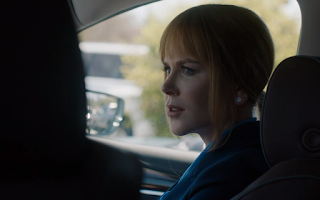 After the trial, Celeste sits with her best friend Madeleine (Reese Witherspoon) in the former's car. Madeleine is always an enthralling foil for Celeste, as she is forever moving and talking while Celeste always radiates a tranquility that is too thoughtful to be coldness. This contrast is present throughout Celeste and Madeleine's exchange. Kidman stoically looks straight ahead, while Witherspoon's words are vibrantly shaky and emotional, feeling so heartbroken that she didn't know what Kidman's character was going through. Kidman's whole demeanor subtly shifts, as she tilts her head and body towards Witherspoon and softly engages in the conversation, before shifting back again. This scene is one of many that highlights Kidman's capacity to play a character that at times seems so otherworldly, confused, and fragile, yet has these sheer moments of moral clarity without ever seeming overbearing. In a kind of quiet stillness where her body hardly moves, Kidman's character verbally takes responsibility for what she has let happened to children, willing to ask herself honestly if she's unfit to be a mother. 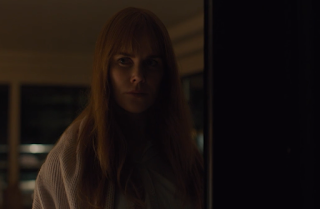 Before their final meeting in court, Mary-Louise comes to Celeste's house late at night to challenge her one more time. Celeste sees her approaching and rushes to head her off. She catches the door just as it's opening, pushing back to make it impossible for Mary-Louise to enter. The older woman shrinks away from this new intimidating, furious Celeste. Seconds before we saw Celeste basking in the glow of her courtroom victory, cheerfully and proudly telling her boys she was like Wonder Woman and the Incredible Hulk combined. That same sense of righteous justice is present in Kidman's performance when Celeste stops Mary-Louise from coming in. She is very quiet so that the boys aren't disturbed, but she doesn't restrain her tongue as she did in the courtroom. When Mary-Louise says that Celeste wouldn't be standing if she'd had to bury her children, Celeste stands perfectly straight and looks the other woman dead in the eyes. She says Mary-Louise lost her sons, but she won't get hers too. She pushes the door closed and sets the locks into place. She is unmoved by the other woman's muffled pleas and watches Mary-Louise scurry out of sight. 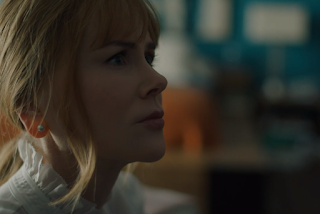 In her next scene, Celeste is sharing a quiet moment with Madeleine. Kidman is so subtle and restrictive in her performance. It's Madeleine who has the dialogue and the fears that need to be heard out. Celeste herself is facing a trial that could shatter her life, but here she's comforting her best friend. She goes from resting her own head on her friend's shoulder to carefully, gently reprimanding her. Kidman is an extreme tour-de-force in scenes like these when she must hold herself back in terms of volume, but she still delivers her lines with power. This same quality works in the scene when she’s talking to her boys about the trial. At first, she avoids eye contact and focuses on every detail of their ties. She is honest with them but not pushy. She keeps her voice perfectly indifferent when they discuss that the judge might ask them if they want to stay with her or go with Mary-Louise. She tells them to be honest about what they want. When they ask her if she's scared, a second passes before she admits to being a little scared. A quick affectionate smoothing of their hair, a loving squeeze of their hands, and a small smile are the only gestures of reassurance she can offer. These scenes, though they are calm, carry an emotional impact they wouldn't have if Kidman didn't portray Celeste with such poise and expressiveness. 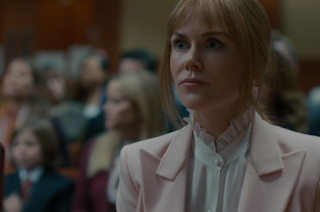 Although Celeste has done what it takes to protect her children, she is still willing to extend forgiveness to Mary-Louise for trying to take them away. The last courtroom scene is a powder keg of emotions just waiting for a match. Kidman deftly inserts the most heartbreaking moment when Celeste reacts to Mary-Louise's speech. Her mother-in-law is offering an apology and saying that she loves Celeste and the boys. Celeste is sitting in her chair, leaning slightly forward with her hands clasped and pressed into her lap. When she hears Mary-Louise's words, she tips her head slightly and her eyes well with hope and the possibility of reconciliation. Mary-Louise then says Celeste is disturbed. She says Celeste was complicit in the abuse, and Kidman switches off that softer part of Celeste. She turns her head away from Mary-Louise and, if not for the slightest angry downturn of her chin, she doesn't seem to be listening. The second Mary-Louise sits down, Celeste stands up. Kidman isn't playing Celeste the attorney here, but her plea as Celeste the mother packs the punch of a closing argument. She denounces Mary-Louise's fitness as a guardian, in light of how she did nothing to help Perry with his childhood trauma and promises the judge she will see that her boys receive the care they need to avoid the same fate. She looks towards her sons in the audience and smiles at them, making the promise to them as much as anyone else in the room. When the judge grants her custody minutes later, Celeste doesn't break her composure except for a gasp of happy relief. Later, when the boys are home, Celeste rewatches a video of Perry. Kidman's expression isn't wistful though. There is a bittersweet smile on Celeste's face. She kisses the screen and deletes the video, and we see that she's found closure. 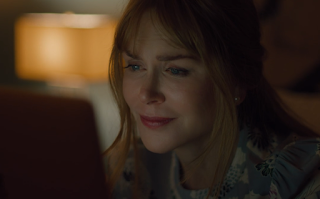 Watching Celeste sink into a stupor in the second season was almost as hard as watching her endure the turmoil she did in the first season. Kidman played these episodes as if Celeste was still trapped, which of course she was. This final episode requires Kidman to almost completely turn around her character's outlook and mental fortitude. We see Celeste rediscover her strength, find the confidence to not only convince a judge she's worthy but more importantly convincing herself. In every exchange, Kidman is incredible. The courtroom scenes where she single-handedly pulls the strings to create the stakes are just as layered as the quiet moments where Celeste sits alone, and we feel the weight of every heavy thought troubling her. The true resolution and catharsis of the season finale come when Kidman lets the burdens slip away from Celeste, allowing the audience and her character to breathe freely again. This level of skill elevates viewers from watching the episode to experiencing it, and SpoilerTV's Staff recognizes Kidman's art by voting her Outstanding Performer of the Month for July.

There are so many layers to Nicole Kidman’s amazing performance in the season finale of Big Little Lies, and while many have been discussed in this article there were many more. Share your thoughts in the comments below.