What can be more exciting than getting to cook a farm raised, heritage turkey named Popcorn? For Bob Belcher, nothing. After five years on a waiting list, Bob has finally scored a coveted Riverbrook Lake Farms turkey for Thanksgiving. He is very excited. Maybe even a little too excited. When Linda jokes about setting up a cot next to the fridge so Bob can sleep next to Popcorn he immediately agrees. Bob is in love.

Tina is also in the holiday spirit with a gratitude tree, where each family member will write what they are grateful for on a leaf and pin it on the cardboard tree. None of the other family members share her enthusiasm for such a cute idea. Louise calls it a "saditude tree" (so cynical!) and Gene wants to know if he can substitute the leaves with pieces of salami. It's a fair question in my book.

Thanksgiving morning, however, brings disaster. The gas is out on the entire block for at least two days. Popcorn's carcass won't keep for that long, and the idea of freezing the turkey makes Bob see red. Gene offers to lend his dad some gas and it's left implied where he will be getting that gas from. Hint: from his butt.

Bob tries to find substitute kitchens, but Gale keeps her cat's litter box in her oven and Teddy is getting his apartment fumigated while he spends the holiday with his flu-ridden relatives. Bob wisely turns down Teddy's invite to The Hot Zone but that leaves him with nowhere to cook Popcorn. However, Bob is nothing if not persistent, at least when it comes to cooking fancy foods. After some internet searching he decides to cook Popcorn in the alleyway over a makeshift fire pit.

Linda just wants to spend the day together as a family and Bob's obsession with the turkey isn't helping, but she's game to help because she's a supportive spouse. I have to say that the Belchers are probably the most functional marriage on television today. I'm not sure I would be as willing to stand outside and turn a turkey over a spit for four hours as Linda is for my significant other as she is for hers (sorry honey!). The kids help out by finding burnable materials for the fire, a job that Louise is probably a little too excited for.

All is going surprisingly well, even though Linda gets distracted by the kids' old artwork during her own search for kindling, until it stops going well. The fire department arrives - it seems that having an open fire in an alley between two building in the city is against the fire code. Bob agrees to stop. Bob is a liar. He is determined to cook that turkey and will flout the law to do it. Popcorn has made him crazy.

Directed to go find more wood in the park, the kids make the trek and while there aren't that many sticks to be found, they stumble upon something even better: a huge log which will make lots of fire.

The only problem is that the log is too heavy to carry, so they decide to roll it home instead. Sounds like a good plan to me. They make it up a hill after a few tries and they almost lose it (and almost kill a few people) when the log rolls down towards a street, luckily stopping right before it gets to the road. It was not a good plan.

The come back thinking themselves as heroes, but Bob, stressing out over keeping the fire under Popcorn burning, points out that the log is useless since they don't have an axe to chop it down. The kids are pissed - they almost killed people for that thing! - and to make matters even worse, it starts to rain.

Bob has lost it by this point, stripping down to use his shirt to protect Popcorn from the rain and at his lowest point almost using Tina's gratitude tree as kindling. Luckily he comes to his senses and realizes he's taken things too far, right around the time the fire department comes back, ready to douse his illegal fire pit.

It his haste, Bob knocks Popcorn right into the fire, and what should have been a delicious cooked heritage turkey turns into a blackened brick of char. 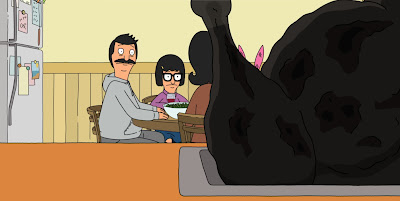 Over sandwiches and cold beans the Belchers fill out their leaves for the gratitude tree, grateful for oceans, firefighters, family, and Gene's imaginary friend recovering from a fall (that last one was by Gene). But luckily there's a Thanksgiving miracle! When Bob is about to dispose of Popcorn's ruined flesh, he notices that underneath the char there's cooked meat. And it's delicious! Everyone abandons their sandwiches to dig into Popcorn, and Louise tells her dad to stop crying because his tears and going to make the turkey salty.