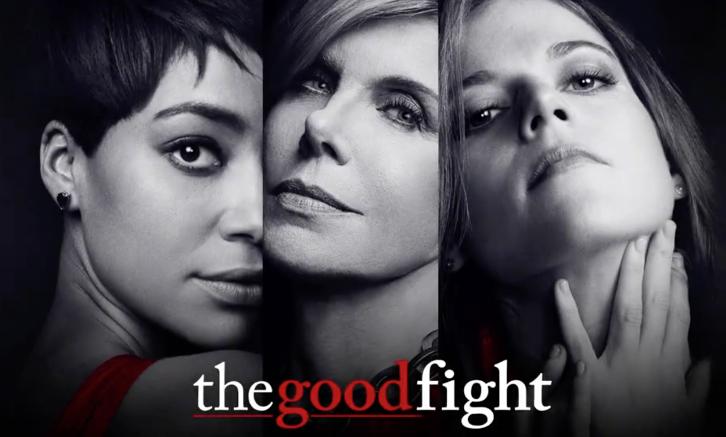 "Having the spinoff on CBS All Access was a logical progression for The Good Wife." -Christine Baranski #TheGoodFight pic.twitter.com/URaK6S0500


After a financial scam destroys the reputation of lawyer Maia Rindell, while wiping out her mentor and godmother, Diane Lockhart's, savings; Maia and Diane join one of Chicago's preeminent law firms.

What happens when you lose everything? You pick yourself up and fight back. #TheGoodFight premieres Feb 19th. https://t.co/iGgV15U8kp pic.twitter.com/tMGb9yUkv3

Be the first to take an extended, behind-the-scenes look at #TheGoodFight. Sign up: https://t.co/VkljV6iwD2 pic.twitter.com/smXiI6AtQQ

Cast Promotional Photo
Thanks to Darthlocke4 for the heads up.


THE GOOD FIGHT picks up one year after the events of the final episode of “The Good Wife.” In the new series, an enormous financial scam has destroyed the reputation of a young lawyer, Maia Rindell, while simultaneously wiping out her mentor and godmother Diane Lockhart’s savings. Forced out of Lockhart & Lee, they join Lucca Quinn at one of Chicago’s preeminent law firms. The series, from “The Good Wife” creators Robert and Michelle King, stars Christine Baranski, Cush Jumbo, Rose Leslie, Delroy Lindo, Sarah Steele, Justin Bartha, Erica Tazel, Paul Guilfoyle and Bernadette Peters. THE GOOD FIGHT premieres Sunday, Feb. 19, 2017.