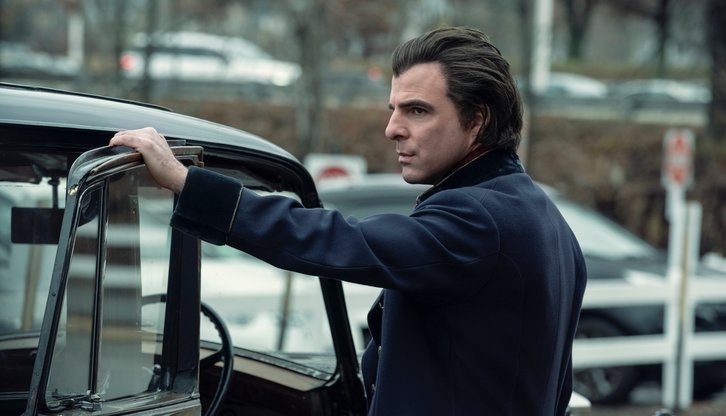 One of Those People Teaser Promo

Vic McQueen is one of those people. #NOS4A2 pic.twitter.com/tHJpnhNbcL

Vic McQueen discovers that she has a supernatural ability to find lost things. #NOS4A2 pic.twitter.com/PjuJi3xwfm

We all have a dark side. #NOS4A2 pic.twitter.com/eI4DtjFSDq

Bing's got a lot of secrets. Played by @OlafurDarri. #NOS4A2 pic.twitter.com/rmm9esEsDx

All that's lost must be found. #NOS4A2 pic.twitter.com/EFqKUxeYjG

The Wraith is coming for you. #NOS4A2 pic.twitter.com/a8GTzU46Yf

The road to Christmasland is lined with snowmen and happiness. Won't you join us? #NOS4A2 pic.twitter.com/o0cnk9lxVB

Charlie Manx is a thing of nightmares. But Vic McQueen might be the one who haunts his dreams.#NOS4A2 premieres June 2 on @AMC_TV. pic.twitter.com/KZ0ejLmXYy

"Fear remains one of the most successful dramas on cable with a passionate fanbase who we think will love NOS4A2, a suspenseful and electrifying character drama set against the back drop of supernatural horror. We anticipate the audience overlap will be strong," said Sarah Barnett, President of AMC Networks Entertainment Group. "Showrunners Andrew Chambliss and Ian Goldberg brilliantly reinvented Fear in its fourth season to much critical acclaim and we can't wait to share with those fans what they have in store for Season 5. Likewise, NOS4A2 showrunner Jami O'Brien and her incredible writing team have created something we didn't know we needed until now - a perfectly unmissable intertwining of horror and Christmas."

Based on Hill's 2013 best-selling novel of the same name, NOS4A2 follows Vic McQueen, played by Cummings (The Goldfinch), a gifted young woman who discovers she has a supernatural ability to find lost things. This ability puts her on a collision course with the evil and immortal Charlie Manx, played by Emmy(R)-nominee Quinto (Star Trek, American Horror Story). Manx is a supernatural villain who feeds off the souls of children then deposits what remains of them into Christmasland - a twisted place of Manx's imagination where every day is Christmas Day and unhappiness is against the law. Vic strives to defeat Manx and rescue his victims - without losing her mind or falling victim to him herself.

NOS4A2 is executive produced by showrunner O'Brien (Fear the Walking Dead, Hell on Wheels), Lauren Corrao, co-president of Tornante Television, and Hill. In addition to Quinto and Cummings, the cast includes Ólafur Darri Ólafsson (Lady Dynamite) as Bing Partridge, Virginia Kull (The Looming Tower) as Linda McQueen, Ebon Moss-Bachrach (The Punisher) as Chris McQueen and Jahkara Smith (aka Sailor J) as Maggie Leigh. The series is produced by AMC Studios in association with Tornante Television.

You Can Be Anything Teaser

Nobody can stop you from being someone in this world. #NOS4A2 pic.twitter.com/jddifSIJff

We Are Not Normal Teaser

Someone Bad is Coming Teaser

Teaser Promo
Thanks to Ryan for the head up and to tu subtitulo for the video.

Deadline Interview
During the TCA panel for AMC's NOS4A2, showrunner Jami O'Brien via Deadline revealed that Pinocchio was used as a source of inspiration. Ashleigh Cummings, who plays Vic in the AMC adaptation revealed that throughout the season we will see the backstories of Manx's victims and the characters in the show. A big theme of NOS4A2 will be the loss of a child's innocence, "How do we nurture them? How do we look after them in the best way so their psychology isn’t damaged and wounded?".

In Christmasland, unhappiness is against the law and Vic is out to defeat Manx and rescue his victims without losing her mind or falling victim to him herself.


"The adaptation process was about trying to honor the spirit of the book as best we can in television… it's a different medium," says O'Brien. With that, she saw Christmasland as a "land for the lost boys" like in Pinocchio. "It's a place that is an amusement park and every day is fun…and every day can't be Christmas Day because if it is, children can become demonic."

Entertainment Weekly Interview
Entertainment Weekly has released a first look photo of Zachary Quinto as Charlie Manx as well as some details. Manx is a supernatural creature who feeds on the souls of children to keep himself young. What remains of the children are left in a fantasy world of his own creation, Christmasland.

The 10-episode series will debut in Summer 2019 on AMC and if it is successful, showrunner Jami O'Brien hopes to expand the universe Joe Hill created in future seasons, "there's no limit to the number of folks that we could meet that have interesting powers and interesting landscapes that they inhabit."

.@ZacharyQuinto is a soul-sucking monster in 'NOS4A2' first-look photo https://t.co/UM6opziGiq


Ashleigh Cummings plays the show's heroine Vic McQueen, who is about to enter her senior year at a high school in Massachusetts. "She's a working-class kid who has such a creative mind that it actually gives her a kind of superpower," says showrunner Jami O'Brien. "Charlie Manx becomes aware of her and realizes that she may be bad news for him, so he has to figure out pretty quickly what to do about her."