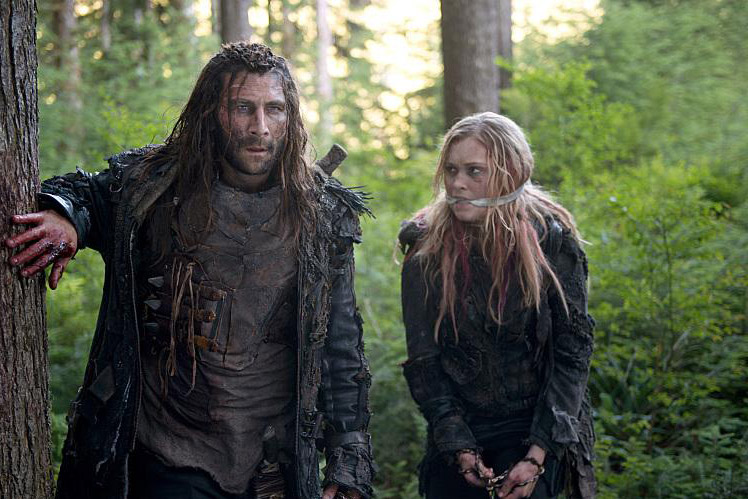 Part two of the third season premiere of CW's The 100 was general improvement from last week's outing. While still perhaps slightly lacking in some areas when compared to the premieres that have preceded it, it's fair to say that introducing new key elements to the storyline is what "Wanheda: Part Two" set out to do, and achieved. Mairsee Almas directed this hour which was written by Aaron Ginsburg & Wade McIntyre.

The episode wasted no time making a big play, with the revelation that the suspected enemies who had cornered Bellamy, Monty, Kane and Indra inside their 4x4 turned out to be members of the missing Farm Station, one of the modules from the doomed Ark. Leading the siege on the 4x4 was Charles Pike. Monty's mother also happened to be among the Farm Station members.

We learn throughout the episode that Charles Pike was the Earth Skills teacher on board the Ark. This put the people he landed on Earth with in comparatively good hands, but a tale of significant hardship is told, with many members of Farm Station dying thanks to the icy region where they landed and the enemies they had faced. Monty's father was one of those who had succumbed, but as was recounted by his mother and Pike, he died a hero. Some tension between Indra and Pike was there for all to see.

Clarke Griffin? If only all of my Earth Skills students were as good as her.

Pike wasn't too concerned about Clarke's ability to handle herself alone while she was being hunted. He would join Kane, Bellamy and Monty in their search for her. More to come on that later.

Immediately after the title sequence, Jaha and Alie appear in the mysterious City of Light for the first time. The time spent in this oasis in the middle of nowhere was brief but impressive, even if it was in a dream Jaha was having during his meditation.

In the City of Light mankind will finally be free of pain, and hate, and disease. Here there will be no more suffering.
I'll fill this place. Starting with my people. You have my word.
I believe in you Thelonious. Together, we will save the human race

The above exchange between Jaha and Alie in the dream is pretty significant. On the surface, the construction of an entire city by an artificial intelligence, combined with the promise of a lifestyle free of pain, hate and disease, is a pretty big ask.

While Jaha remains convinced at this point that the City of Light is a thing, Murphy remains skeptical, and rightly avoids placing any trust with anyone who has yet to earn it.

Jaha, Murphy and Emori, accompanied by Alie and two others, arrived at their destination on board the boat they left on in last week's hour. Their surroundings looked no different to where they left, minus the mansion of course.

What happened next was quite surprising. We learn Emori and her accomplice were recruited, presumably by Alie. They obtain technology for her and take it to the 'big guy', who would die at Emori's hands moments later. They use the boat to get around, but they had been told Jaha needed a ride this time, so they obliged, resulting in their current situation.

Things became even more interesting later on. Emori and Murphy opened the backpack which was obviously fairly important to Jaha. When Emori was held at knifepoint, a weary Murphy threw the backpack into the water and him and Emori made their escape on the boat. Suddenly, Jaha is back in the virtual City of Light, where Alie appears, along with the big guy who was supposedly dead, only this time his rather significant facial disfigurement wasn't present.

I'll be honest - this did not make much sense to me at all. All I can say is I hope this whole storyline makes much more sense in the near future.

Thankfully there was some other stuff in this episode that not only made more sense, but was more entertaining on the whole.

Clarke featured in this episode much more than she did in last week's installment. The first we see of her this week is while she is being led by Roan alongside a river. A pretty spectacular and well directed fight scene occurs here when Clarke pretended to collapse from exhaustion. Clarke didn't win the contest in the end, however, but the water was enough to remove the paint which was obscuring Roan's Ice Nation brand on his right temple. Only then did Clarke fully understand who had captured her.

Lincoln and Octavia had a comparatively quiet episode, but they did happen upon good friend Niko, who was critically wounded on horseback approaching Arkadia. Abby had to make the tough call, with Lincoln's approval, to source medical aid from the disused Mount Weather base.

Places are not evil, brother. People are.

Fortunately Niko pulls through, but the attack on him is a sign that danger is never far away. The months of peace Arkadia has enjoyed could come to an end at any time.

Deep inside Ice Nation territory, Bellamy, Kane, Pike, Indra and Monty left on foot to search for Clarke. It doesn't take long to become clear that Pike brings a more organized, strategic approach to the search. Where the likes of Kane and Bellamy - and even Clarke - tended to choose their next move in the form of a reaction, Pike is much more adept at playing the long game. This was apparent when Pike, despite having eyes on the fleeing Clarke and Roan at one point, took control of the others and instructed them to hide the bodies of Ice Nation members Roan had just ambushed, and wait in a cave for a significant army of Ice Nation to pass.

Roan was wounded by Clarke in the skirmish, and the pair sought refuge in some ruins. It gave Clarke an opportunity to use her best weapon: her words. She had to try to understand Roan's motives, and they turned out to be rather interesting.

A restless Bellamy ended up slipping away from his team, disguising himself as an Ice Nation soldier using the clothes from the bodies they moved earlier. It didn't take him long to catch up with Clarke and Roan, but a skirmish with Roan resulted in Bellamy escaping with his life by the slimmest of margins. He did sustain a reasonably serious stab wound to the thigh which he tried to push through in pursuit of Clarke and Roan, but fortunately Monty got through to him, talking him out of continuing with the chase. 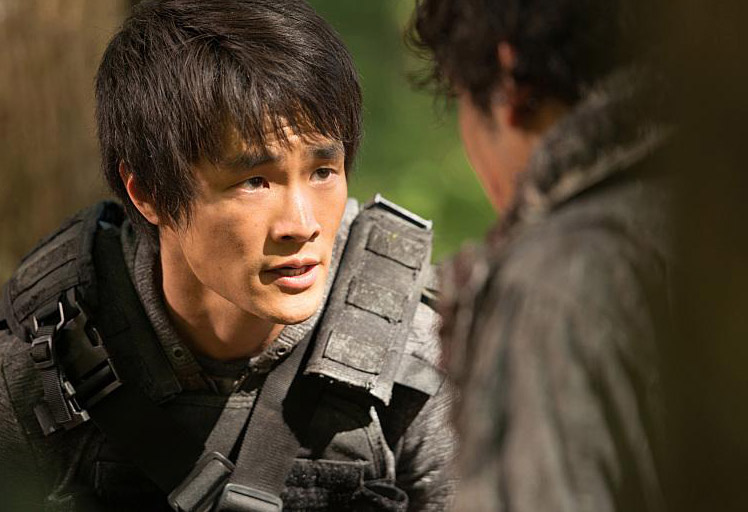 Bellamy's encounter with Roan was one of the highlights of this two part premiere in my book. Guest star Zach McGowan has been solid in both episodes but he was at his best here. Eliza Taylor and Bob Morley were excellent too - although Clarke and Bellamy were reunited for mere seconds, the unique connection this pair have is still remarkably strong, and was beautifully portrayed, especially when Clarke begged Roan to spare Bellamy's life.

I wrote in-depth in last week's review on the subject of politics, and how it can have a detrimental effect on a series. Though hints of the subject were scattered through tonight's episode, the most spectacular instance was in the final scene, where we welcomed Lexa back into the fold in a game-changing role.

In an exchange between her and Roan, during which Clarke was also present, we learn Roan had a deal with Lexa which involved capturing Clarke in exchange for the lifting of a banishment against him by the Grounders. Lexa has a vested interest in keeping Clarke under her control because she sees Clarke as a playing card in the impending war with the Ice Nation.

It's a complex arrangement which hasn't been explained as well as it should have been, even though the whole storyline is in its infancy. Too much at this point is being left up to the viewer to guess, and that's not ideal. Just a couple of additional lines of dialog between the characters here could have dramatically improved the flow of the scene.

Nevertheless, the foreshadowing in the final seconds of the premiere cannot be mistaken. We see a young, inexperienced Lexa visibly concerned for the future, looking out from the top of a crumbling, unstable skyscraper perched among a vast tree-covered wilderness. Though the tower may appear to be a fortress of strength, the truth of the matter is that it is a strategically poor place to be, and vulnerable to attack from all angles.

In all, the introduction of survivors from Farm Station is probably the most significant takeaway from this episode. You'll be seeing plenty more from them in the next few weeks. Anything could happen with Clarke and Lexa, and the same can be said about Murphy, Emori, Alie and Jaha. We've got some good stuff to look forward to for the next wee while.

Thanks so much for reading! The opinion poll is below for you to rate the episode of The 100 yourself. As always, jump in the comments below and share your thoughts on the episode. It's always great to see what everyone thinks. Don't forget to give this article and the poll a like, tweet or +1. Keep an eye out for a preview for next week's episode in the coming days!
About the Author - Jimmy Ryan