The Otto gang's heading to Hollywood!

The Otto's get ready to head out on the vacation Anna-Kat won for selling the most cookies. Katie will be turning 40 while they are there, but she insists no one make a big deal (unless it gets her out of helping the kids get ready to leave!) When she heads out for Second Breakfast, Greg discovers that Anna-Kat's idea of packing is an earthquake kit and a book about how famous celebrities died. So, he makes Taylor help her pack and insists the two of them hide Katie's birthday present among her stuff. Oliver, meanwhile, is growing frustrated with Cooper, who doesn't seem to be able to understand the confines of families who have to live within a budget, and the two are in the midst of a fight when the family leaves. 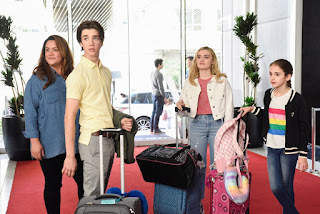 As the Ottos arrive at the hotel, they marvel at how nice it is, and Oliver gets a surprise when Cooper shows up. He doesn't like to go to bed angry, so he hopped on his jet and scooted over to Hollywood. Unfortunately, Cooper's still suggesting crazy expensive things and not understanding that Oliver can't afford them, which frustrates Oliver to no end. Cooper says he wants to understand, so Oliver tells him that tomorrow they'll explore LA and Cooper will be challenged to stay within Oliver's budget.

In the hotel room, the Ottos watch the nanny cam in the living room back home. ("We put it in to spy on Taylor when she first started dating Trip...Relax, we stopped watching after the 15th time you guys tried to play Clue and couldn't figure it out.") Katie's hired Maria to stay over and watch Luther. But, Maria's not the only one at the house. She's invited over her sometimes boyfriend, sometimes arch-enemy Principal Ablin, and the two are making out on the couch!

When everyone starts to argue about what they want to do, Katie takes Angela's advice and declares everyone is on their own to do what they want, making it a true "vacation." So, the next day, Oliver heads out to meet Cooper in Beverly Hills. Katie and Greg plan to head to Lisa VanderPump's restaurant, where Katie's determined to spot her favorite Real Housewife. (Greg's stuck doing what Katie wants since it's her birthday.) Anna-Kat and Taylor head to the Walk of Fame and then the Wax Museum. (Taylor's been challenged to watch out for Anna-Kat to check off another thing on her adulting list - "Keep a plant alive. That's close enough.") The two are also responsible for getting Katie's birthday present re-framed. (Anna-Kat popped all the bubble wrap it was supposed to be insulted with and the frame broke on the flight!) 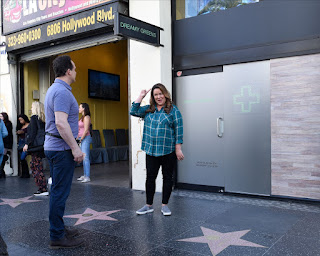 Before going out on the their own, Greg insists on checking up on the girls. While spying on them, Katie sees something she'd rather do more than go to the Pump restaurant - get high! It is legal, after all! (And they didn't nickname her "Katie-DeNasty-Bong-McGyver-Babalong" for nothing!) Greg's nervous, because he's Greg, and as reigning King of the Nerds, has never gotten high before.

Greg ends up finding the pot store very educational. ("The gentleman at the front told me that when you want to smoke you look at your watch and say 'Hey now. It's blunt-o'clock!") Greg starts to wonder if the edibles are going to do anything, but Katie says to wait a second. And soon enough, the two are high-as-the-sky, cramming munchies in their mouth, and having a grand old time. Really, stoned Greg and Katie are something to see.

Unfortunately, stoned Katie put the wrong "Pump" into the Uber app and the driver ends up dumping them off at an auto body shop - which so happens to be named Pump! And stoned Greg left his fanny pack with their money and phones in the Uber. So our two favorite potheads are stranded. Thankfully, the two are able to use what brain cells they haven't fried to figure out they should borrow a phone inside the auto-body shop and call Oliver and Cooper, as they've got Cooper's driver with them. But, they're so stoned it takes them a while to remember Oliver's phone number!

In Beverly Hills, Oliver gives Cooper 20 dollars and tells him that's all he has to spend. But Cooper's still not getting it, and finds a Lamborghini he plans to buy! When Oliver finally gets the call from Katie and Greg that they're stranded, he complains to Cooper about never being able to get away from his parents. Cooper says he doesn't really understand that problem. After-all, his parents are never around. Cooper then finally realizes what Oliver's been trying to get across to him. "It feels bad when your best friend has something you want but can't have." In Oliver's case, it's money. In Cooper's case, it's parents. Oliver suggests they start being more sensitive to what the other is lacking, and Cooper suggests they keep sharing with one another. Cooper will share his money and Oliver will share his parents. The two agree that their best combination is together. 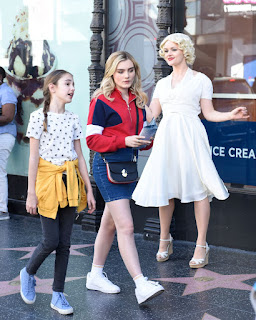 Taylor and Anna-Kat run into their own problems, when despite Anna-Kat's warning, Taylor falls for one of those cup and ball magic scams and ends up losing all their money. Taylor realizes they're not going to have the money to pay to get the frame fixed and Anna-Kat wonders if they should just give up and call Greg. Taylor refuses. Thankfully, Anna-Kat has one more idea to earn more money - busking! Apparently, the youngest Otto shares her sister's serious set of pipes, and she's able to make $100 singing Miley Cyrus to passer-byes! Taylor apologizes to Anna-Kat for complaining about having to look after her when in reality Anna-Kat was the one who ended up looking after them both. Anna-Kat says from now on, they'll both look out for each other, before promptly chasing after Taylor and stopping her from falling for another street performer scam!

Later, the gang finally meets up at Lisa Vanderpump's restaurant Pump. Greg and the kids surprise Katie with the picture - the recreation of her favorite picture of them all trying to bake in the kitchen that they made a while back! And Cooper surprises her with one more thing - meeting his godmother, who is Lisa Vanderpump! And it turns out she's a fan of Professor Badonkadonk!

Later, the Ottos are watching Maria and Ablin on the nanny-cam, when Ablin proposes! And Maria says yes! (Looks like Ablin will finally be moving out of Mother's house!) After that, Greg suggests Katie open her card from Doris and Angela. Inside, it says, "Open the Door." She opens the hotel door...and who's standing on the other-side but Doris and Angela!

Random Thoughts:
-One of Angela's exes is in a coma and another is in jail? Oh my!

-I laughed pretty hard when Greg was talking about the water bottles in the hotel and said: "Don't touch the big Fiji!" I've almost made that mistake way too many times!

-Best lines go to Oliver when discussing past vacations - "This vacation is gonna be so much better than our usual trip to Colonial Crapsburg," and Taylor - "I wanna see the Specific Ocean!"

Did you get a good laugh out of watching Katie and Greg get high? Were you surprised to see Ablin propose to Maria? Let me know below!