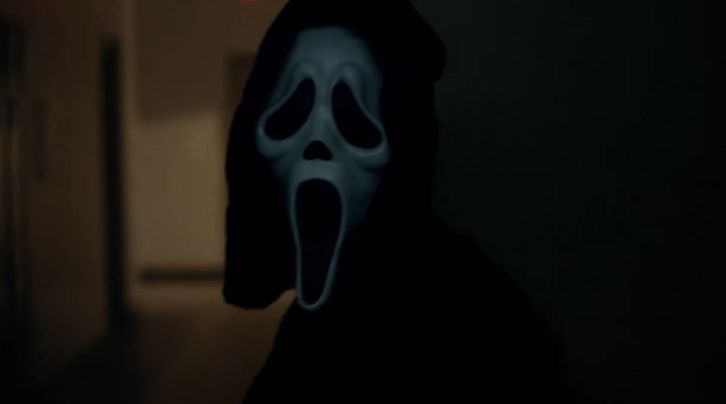 As the “Scream” burnoff binge event barrels towards the closing credits, the Deadfast Club must overcome their “Blindspots” if they want to make it through the “Endgame.” Not everything in these final episodes worked for me, but overall, it was an enjoyable enough ride.

Beginning with “Blindspots,” the penultimate episode sets out to interrogate the two main suspects still on the list – Liv and Jamal. Let’s start with Liv. After a night at the hospital spent fretting over her father’s fate and a nasty argument with Deion about his suspicions that she’s Ghostface and her getting him arrested, she’s on a knife-edge. And Liv’s mood only worsens when Kym and Beth show up at the hospital. See, Kym’s decided to switch up the genre (“We just left the world of horror...and now, we buddy cops!”) and convinced Beth to team up to investigate Liv. They come at her too strong on first approach, but when Kym tries again with a softer glove, she manages to get some answers. The secret phone, it turns out, was from Liv’s mom, to ensure they could stay in touch if her dad tried to cut off contact. Liv also reveals that she literally blames herself for her parents’ divorce, because she caught her mom cheating and told her dad (and sidebar – I kinda thought this detail would loop back around to the killer, that who Liv’s mom is or who the guy she cheated with was or even her being MIA when Liv tries to call her in this episode would be a piece of the Ghostface puzzle. But nah, it doesn’t really come up again). This relatively reasonable explanation sways Kym, but Beth isn’t buying Liv’s sob story. And when Liv keeps saying cryptically incriminating things like, “I just went crazy for a second,” it’s hard not to see her point.

Elsewhere in College Park, it’s brother versus brother as Deion grows suspicious of Jamal. Having grabbed a handful of promotional flyers from Jamal’s car, promising to pass them out as a thank you for picking him up from prison (Officer Reynolds regained consciousness long enough to clear him, btw), Deion is stunned to realize that they’re for a party being thrown by the same promoter behind the silent disco in the premiere. Convinced that the choice of costume couldn’t have been a coincidence, Deion tries to get Jamal to introduce him to “Mr. Fade,” but only gets more cause for worry when he discovers a Ghostface costume tucked in the trunk of Jamal’s car. And when Jamal finally admits that he’s “Mr. Fade,” that he’d been working for Shane and took over after his death, Deion accuses him of being the killer. He mentions the unloaded gun Jamal gave him last episode, and then theorizes that Ghostface would have to be someone close to him, who knew his schedule, knew his secrets. “Then I ain’t him,” Jamal rightfully retorts, “we ain’t ever been close like that!” I must say, I was wary about his casting, but Tyga’s been pretty good in this role, playing the tension between Jamal and Deion in a way where you can’t be sure if it’s normal sibling friction or something more sinister. 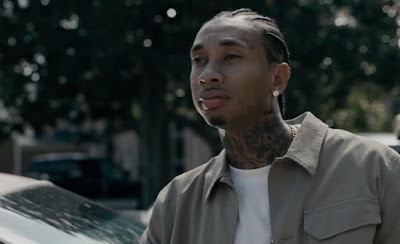 To that point, before Jamal drives off in a huff, he notes to Deion – as either a cheap shot or a direct threat – that if he were the killer, his next move to “hit [him] where it hurts the most” would be to take out Liv and her dad at the hospital. And indeed, that’s what Ghostface does next, stabbing a cop in the head before violently ripping the breathing tube out of Officer Reynolds’ throat, though Deion does get there in time to save him at least. So that doesn’t look good as far as Jamal’s innocence goes. But as “Blindspots” ends, we see Jamal get a call from the killer, who trashes him for taking “undeserved credit.” He then gets jumped by Ghostface and stabbed several times with a trash spear.

Though the audience now has a reason to doubt his guilt, Jamal’s still the prime suspect when “Endgame” begins, the police in pursuit of him after being tipped off by Kym and Beth. Despite assurances from his family and friends that he should still play in his big game, to not let Jamal take that from him too, Deion is badly shaken by a Ghostface call. “Own up to who you really are,” the killer orders, “on the inside.” Things come to a head when the kids get a video from Ghostface showing that Jamal is still alive and daring Deion to come rescue him. That’s when he finally confesses to Liv his real “deepest, darkest secret” – he and Deion switched costumes before going into the scrapyard. Because, that’s right, Deion is not Deion, he’s Marcus, and has been since that Halloween night!

I’m really, really mixed on this twist. At first, I was annoyed at myself for not seeing it coming, because, given the genre of the story, why else make them twins if not to do some kind of switcheroo. But mulling it over some more...doesn’t it mean that Marcus is also kind of a sociopath lol? His motive feels thin – basically, he didn’t correct his mom when she thought he was Deion, never got caught, and so decided to take advantage of the opportunities (...as a ten year old?) and treatment Deion got versus him. And it’s crazy to me that he wouldn’t have slipped, in eight years, when the night this all happened was so traumatic. Sure, we did get that mention from his mom in the premiere about mental health issues, but it’s not enough to sell this, IMO. And on top of that, the switch is inconsequential to the bigger story – it’s not the main plank of Ghostface’s grudge, and there are no other consequences (it’s breathtaking how quickly Liv brushes it off!). It might have been an interesting idea to explore if it had been introduced earlier, maybe halfway through the season versus halfway through the finale. But yeah, overall, while I respect the big swing, it just didn’t work for me.

Anyway, DeMarcus – a name coined later by the killer that I’ll be using going forward – runs off into the night to save the brother he has left, finding a bleeding Jamal tied up in their father’s haulage truck. But it’s all a trick as Jamal cops to being Ghostface. His motive, as has already been laid out, is that he blames DeMarcus for their father’s abandonment and his mother’s subsequent suicide, though we do get the additional tidbit that he knew DeMarcus was a fake because their dad secretly introduced him to the real Deion earlier that year. But as he describes what he did, it quickly becomes clear that he only killed the non-Deadfast Club victims – TJ, Avery, etc. And with his dying breath, Jamal taunts that the “she” he’d been working with will finish the job of destroying DeMarcus’ life.

DeMarcus is at a loss, because the three main characters left besides him are all female. And by the time he makes it back to the school, Kym is somewhat suspiciously absent while Liv and Beth are pointing fingers at each other, claiming the other has knowledge about Amir’s kill that they shouldn’t have. But swiftly, the killer makes herself known by shooting DeMarcus. So who’s the second Ghostface? Say it with me – Beth! 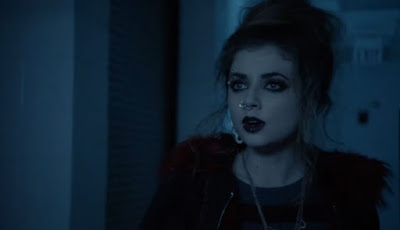 Beth being one of the killers was a relative surprise, I’ll admit. Given her talk with Kym earlier in the episode about the trope, I had her pegged to emerge as an unlikely final girl. But as she dons the costume and chases Liv through the school, Beth reveals that she always knew she was a sociopath, that she scratched the itch with horror movies, but eventually realized that it wouldn’t be enough (so basically, in “Scream 2” terms, Jamal was the Mrs. Loomis, driven by a personal grudge, while Beth is more of a Mickey, playing Ghostface games just to indulge a murderous side). “I was a wannabe killer in search of an origin story,” Beth continues once she’s cornered Liv on the roof. And she found one when Jamal walked into her tattoo shop.

I found it interesting that the Deadfast Club members weren’t chosen for any particular reason (after the twin switch reveal, I briefly thought that they might have been childhood friends of Marcus’ that he abandoned when he became Deion and that’s why they had targets on their backs), but because Beth recognized the cinematic potential of the group when they all got detention together. I mean, remember, she’s the one who gave them their name! But it was bizarre when she was all, “I’m a remorseless, unfeeling killer! But I also think Kym is kinda cool so I gave her the chance to tap out.” Finally, I thought Giorgia Whigham acquitted herself pretty well in these scenes, but the monologuing dragged on a little too long.

So long, in fact, that it gave an undead DeMarcus a chance to come to the rescue and, between him and Liv, they manage to overpower Beth and send her falling through a skylight. And having learned a lesson from Beth about the killer always coming back “for one last scare,” Kym not only didn’t abandon her friends, she takes the title of final girl by putting the final bullets in Beth. The three survivors promise to make the most of their lives to honor the dead. Nobody else finds out Deion is really Marcus. And that’s a wrap on season three of “Scream!”

What did you think of this rebooted, resurrected season of “Scream?” What would you say were its “Blindspots,” and did you see the “Endgame” coming? And what would you like to see happen with the franchise next? Scream and shout about all of it in the comments section.