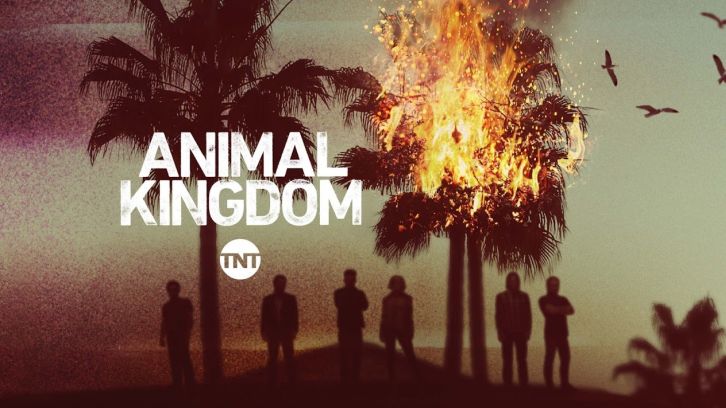 
Extended Promo
Thanks to Jenny for the heads up.

The Codys are back, and the ties that bind them are about to be stretched to the limit when TNT's hit Animal Kingdom returns for its second season. One of cable's Top 5 new dramas this past summer, the series about a Southern California crime family stars Emmy® and Tony® winner Ellen Barkin as the matriarch of the Cody clan, Scott Speedman as her second in command and Shawn Hatosy as her volatile, mentally unstable eldest son. Also starring are Ben Robson, Jake Weary, Finn Cole, Molly Gordon and Carolina Guerra. The second season of Animal Kingdom, which has been expanded to 13 episodes, is slated to launch Tuesday, May 30, at 9 p.m. (ET/PT) on TNT.

In season one of Animal Kingdom, 17-year-old Joshua "J" Cody (Cole) moved in with his freewheeling relatives in their Southern California beach town after his mother overdoses on heroin. He finds himself in the care of his estranged grandmother, Janine "Smurf" Cody (Barkin), a woman who rules her sons with a firm but, at times, emotionally incestuous hand. Her second in command is Barry “Baz” Blackwell (Speedman), whose power and position in the family is threatened by the return of Pope (Hatosy), Smurf's eldest son just released from prison. Smurf's tough, impulsive middle son, Craig (Robson), has a drug problem beginning to cloud his judgment and endanger the rest of the family, and Deran (Weary), the troubled and suspicious "baby" of the family struggles with accepting his sexual identity. Hovering on the edge of this less-than-idyllic household are J's girlfriend, Nicky Belmont (Gordon) and Baz's daughter, Lena. It isn't long after J's arrival that he finds his place within the dangerous family, a sense of belonging that he earns at the conclusion of season one.

As the second season opens, the Cody clan is back to their old ways and in the midst of a fun, high-adrenaline heist. But when things don’t go as planned, the family dynamics become more fractured than ever as some members advocate for independence from Smurf. Adding fuel to the fire is an external threat from Smurf's past that has come back to haunt her.

Animal Kingdom, the first of TNT's new breed of dramas to premiere, reached an average of 5.5 million viewers per episode across multiple platforms during its first season, with audience increases nearly every week. On the competitive front, the drama finished the third quarter as one of cable's Top 5 new dramas with Adults 18-49 and one of the Top 15 cable dramas overall (new and returning series). Animal Kingdom also ranked as one of cable's Top 3 new summer dramas in social media engagement, while its premiere episode was one of the Top 10 most socially engaging drama episodes on all of television for the night. In addition, the series has brought in the youngest audience of any current TNT drama.

Animal Kingdom is produced by John Wells Productions in association with Warner Horizon Television. Emmy® winner John Wells, Jonathan Lisco, Christopher Chulack and Etan Frankel serve as executive producers on the series, with Megan Martin, who is also working with Wells on the TNT pilot The Deep Mad Dark, serving as co-executive producer. Animal Kingdom was developed for television by Lisco and inspired by the award-winning feature film written & directed by David Michôd and produced by Liz Watts, who also serve as executive producers on the series.


Teaser Promo
Thanks to Who Shot J.R.? for the heads up