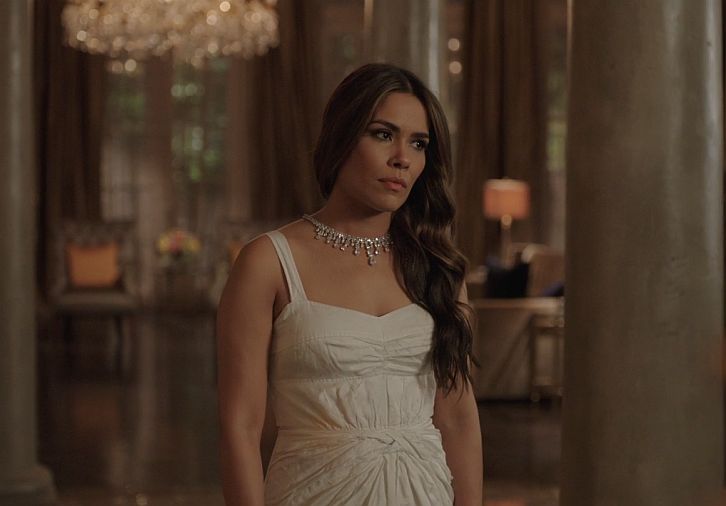 It’s convenient that “Dynasty” currently has a chaplain in its recurring cast as “You Make Being a Priest Sound Like Something Bad” finds Blake and Cristal’s marriage, Adam’s medical career, and Fallon’s latest scheme all possibly in need of last rites.

Starting with Mr. and Mrs. Carrington, they’re dealing with their recent infidelities in pretty different ways. Cristal is racked with guilt and, after conferring with Father Collins, they concur that their kiss was “a great mistake,” but a mistake nonetheless, and agree that it’s better if Father Collins doesn’t attend the fundraising gala for the veterans’ clinic. Blake, meanwhile, is full of bluster as he finalizes his reacquisition of Carrington Atlantic, and later arrives home with an extravagant necklace for Cristal. But after a passing Fallon notes that it’s a classic Blake guilt gift (“Alexis had a few. Even fake Cristal got one”), Cristal becomes suspicious, even more so when Blake way overreacts to her questions about it. A quick snoop through Blake’s study turns up a monogrammed charm of Laura Van Kirk’s and, between that and a damning spike of Blake’s heart rate on their shared fitness app, Cristal puts the sordid truth together.

For someone who recently swapped spit with a man of the cloth, Cristal is pretty disgusted by Blake’s actions, insisting to Father Collins that their indiscretion “was wrong, but different.” More than anything, Cristal seems concerned that Carrington Atlantic is the true love of Blake’s life, that he’d do anything for it, but not for her. And her fears appear to be confirmed when Blake announces that he’s blowing off the gala to see to CA business. They get in a huge fight which culminates in her chucking the guilt necklace at him. And when Father Collins ends up showing up at the gala anyway, she bones the chaplain in front of a roaring fire. This storyline still feels like it’s moving too fast. I’m actually kinda hoping it turns out that Father Collins has some kind of hidden agenda versus him being so in wuv with Cristal.

But Blake’s in danger of more than a broken heart. Because the episode ends with Adam informing a shocked Cristal that his father and Anders – who flew to Moldavia to deal with a conflict over Carrington Atlantic oil tankers – have been...dun dun dun!...kidnapped. I’m really curious where all this Moldavia stuff is going. Could a massacre be in our future?!?! 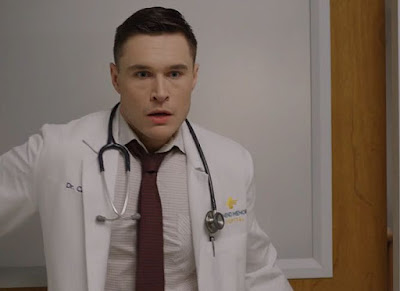 In the meantime, on to Adam’s storyline, which saw his medical career being held hostage. Adam’s just gotten done “Grey’s Anatomy”-ing Kirby in a hospital supply closet (was I the only one surprised to learn that these two are still something of an item?) when he’s summoned to answer questions about missing medication, which we know he stole as part of his scheme with Alexis to dope Jeff. His attempts to talk his way out of trouble with his supervisor, Dr. Bailey (heh), fall completely flat, and she makes it clear that the only way he can save his job is by sleeping with her. You’d think that wouldn’t be a problem for Adam, who has certainly done crazier stuff to get what he wants, but as he explains to Kirby, surviving the liver transplant surgery has left him with a desire to be good (I guess he’ll be calling Paris to spring his half-brother from the mental hospital he parked him in any second now!). He even declines to use what he saw last week against Cristal! So awesomely, Kirby’s the one to do it, cornering Cristal at the gala and coercing her into using her connections as a Carrington to save Adam’s job. I loved this turn of events as it is exactly the kind of thing I’ve wanted to see more of from Kirby as a character and Kirby/Adam as a couple.

Finally, let’s talk about what Fallon got up to this week. She breezes into Culhane’s apartment seeking his help with a wedding gift for Liam. Almost immediately ignoring his advice that something simple and meaningful is better than something extravagant, Fallon latches instead onto the idea of getting Liam’s favorite band, Kelly & Donna (cute ‘90s shout-out!), to sing at the wedding. And lucky for her, they’re playing the gala so Fallon gets Cristal to put her in touch with their manager. But once she learns the duo now only performs at charity functions, Fallon first lies that she was in the same sorority as Kelly and Donna, and then must go along with their misconception that she was the one to spearhead the veterans’ clinic project. This leads to her making several embarrassing gaffes at the gala, only to learn that Kelly & Donna aren’t even the singing group she was thinking of! In the end, to smooth things over with Cristal, Fallon steps in to sing when one of the ladies gets sick (letting Elizabeth Gillies show off her pipes again). And she tells Culhane she’s decided to write a love song for Liam and perform it at the wedding (which will let Elizabeth Gillies show off her pipes again). 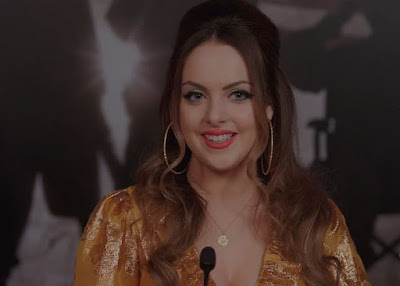 To wrap up, Fallon is amusingly delighted when Culhane asks for her help getting revenge on Dominique and Vanessa. And that’s something I really enjoyed about this episode, how connected all the storylines felt. There was Fallon as the bystanding catalyst of the Blake/Cristal blowup. Kirby using her knowledge of what’s going on in Cristal’s story to advance things in her own. And Fallon and Culhane becoming each other’s confidants about their respective relationship dramas. There was even a great throwaway moment where Fallon stomps past Kirby, notes that the gown she’s wearing is hers, and orders her to return it. Too often, the characters on this show can feel segregated in their story bubbles, so it was nice to see them blended more.

Now that I’ve given my sermon on “You Make Being a Priest Sound Like Something Bad,” it’s your turn to share your thoughts on this week’s “Dynasty” in the comments section.