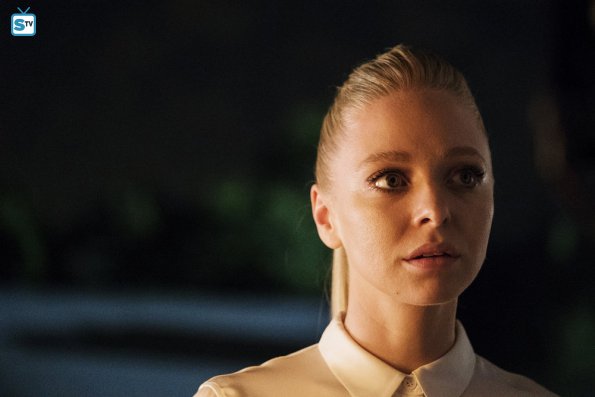 
Angela makes an acquaintance; Darlene realizes she is in too deep; an old friend reveals everything to Elliot.

Source:
USA Network
Please click the link below to read the full detailed interview with Kor Adana (Episode co-writer and series technology producer) on THR, it's a very good read.


Elliot and Angela share their first kiss in this week's episode. It's Elliot who makes the move both to hug Angela, and then kiss her. He's not exactly known for loving physical contact, so in its own way, this is one of the more extreme actions we've seen from Elliot. Can you talk through his head space during this moment, and why now was the right time for a romantic moment between Elliot and Angela?

We know that Elliot has trouble with physical contact and that he feels awkward in social situations. I believe Angela has always been a slight exception to that for him. Even in our pilot, he avoids going to her party, but by the end of the episode, he lets her hug him and he reciprocates a little. With this scene on the train, I think the realization of how much pain he's caused Angela really hits him. There are so many unintended negative consequences to Elliot's actions and this is an example of him trying to reconcile that. I think Elliot truly believes this might be the last time he'll see Angela for a long while, and he doesn't want the moment to end. Even with everything going on, if he could just hang on to that moment for a bit longer, it's worth it. It's the realization that this kind of human connection can be comforting for him, which is a big discovery for Elliot. For someone who spends so much time in his own head, it's important for him to get a taste of what he's been missing. Deep down inside Elliot, there is a longing for a deeper connection to Angela, but he can't have that now... especially after making her complicit in one of fsociety's hacks.

Finally, tell us more about how Elliot's trick with the Pringles can works. The world needs to know.

This is an old-school hacker trick that gets you access to a far away WiFi network. The Pringles cantenna is a concentrated signal that amplifies your WiFi capabilities. You take a USB WiFi dongle and mount it inside of an empty Pringles can, strategically aim it, and you'll be able to access distant SSIDs and increase your signal anywhere from 5-22db. Think of it as a shotgun microphone, but for WiFi connectivity. Elliot has been incarcerated for 86 days, so odds are he doesn't have a working internet connection at his apartment. He uses the cantenna to connect to a nearby, unsecured WiFi network.