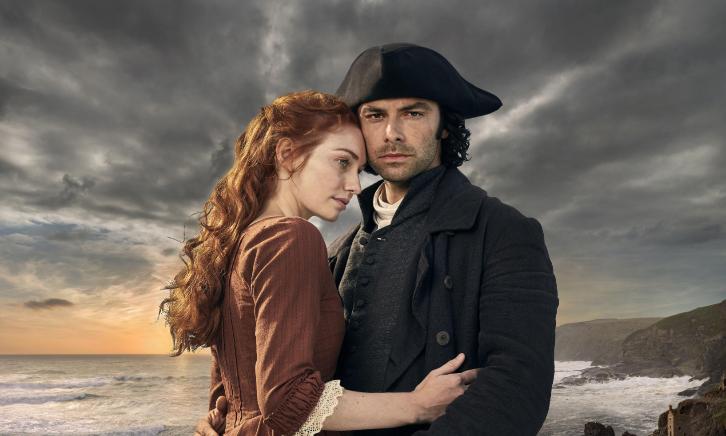 Ross and Demelza look to forget the past and rebuild their marriage, but new arrivals threaten their fragile reconciliation.

Aidan Turner and Eleanor Tomlinson return to BBC One this summer with the third series of epic Cornish saga Poldark.

Following hot on the heels of the second series, the third instalment brings a host of new characters and worlds into play.

1794: Ross must traverse new family, new love and new conflicts, as the French revolution casts a shadow over life in Cornwall. Facing battles both at home and abroad, will Ross answer the call and risk losing everything he holds dear?

Turner reprises his role as the hero Ross Poldark, as he tries to rebuild his marriage to Tomlinson’s Demelza, but their fragile peace is disturbed by the arrival of her deeply Methodist brothers Sam and Drake Carne, played by Tom York (Olympus) and Harry Richardson (Doctor Thorne) respectively.

Also returning are Heida Reed as Elizabeth and Jack Farthing as George Warleggan as they expect their first child and plot their ambitious rise to be the most powerful family in Cornwall. George will try to separate Elizabeth from her Poldark roots and will employ Elizabeth’s cousin, Morwenna, played by Ellise Chappell (The Last Dragonslayer), as a governess to Geoffrey Charles, played by newcomer Harry Marcus. When Morwenna meets Drake Carne, the pair will fall in love and the Poldark and Warleggan households will collide once again.

Producer Michael Ray says: “The world of Poldark expands again in series three as we head across the sea to violent revolutionary France, meanwhile on the home-front we meet the richest and most powerful people in Cornwall. And they all want a piece of Ross.

“It was a great challenge to create the world of France, which we did on location in Cornwall and Bristol. It’s a much darker and colder place than our beloved Cornwall and it poses a constant threat to our heroes at every turn. Berkley Castle in Gloucestershire was transformed into a guillotine-happy port town and Bishop’s Palace in Wells, Somerset was turned into a deadly Convent-come-Prison for a week – and they saw a lot of action! Our stunt co-ordinator had his work cut out for him.

Producer Roopesh Parekh continues: “Debbie Horsfield’s extraordinary talent for weaving explosive events with the delicate struggles of a marriage has reached new heights. Ross and Demelza finally have some wealth and success and their eyes are opened to a much grander world than the one they have previously inhabited, but the secrets of the past continue to hang over them and they are pushed and pulled in different directions. Adapted from The Black Moon and The Four Swans in the Poldark book series, the shadow of the Black Moon is felt over the whole series. There will be some tragic losses this year.”

Poldark is filmed on location in Cornwall and the Bristol area and at The Bottle Yard Studios. A fourth series will go into production this autumn.

Based on the novels by Winston Graham, Poldark is a nine part series written and created for television by Debbie Horsfield (Cutting It, The Riff Raff Element) and directed by Joss Agnew (Brief Encounters, Mr Selfridge) and Stephen Woolfenden (The Halcyon, Doctor Who). It is produced by Roopesh Parekh (And Then There Were None, The Hollow Crown) and Michael Ray and the executive producers are Debbie Horsfield, Karen Thrussell, Tom Mullens and Damien Timmer for Mammoth Screen and Elizabeth Kilgarriff for the BBC.

Premiere Date & Promo
Thanks to Carmkarn for the heads up.

Also, if you weren't aware, Season 4 is confirmed.
Thanks to Carmilla Karnstein for the heads up.

JUST in case you think you've not had enough good news... We can confirm #Poldark is returning AGAIN for series 4! ???????????? pic.twitter.com/TccMhCLtXu