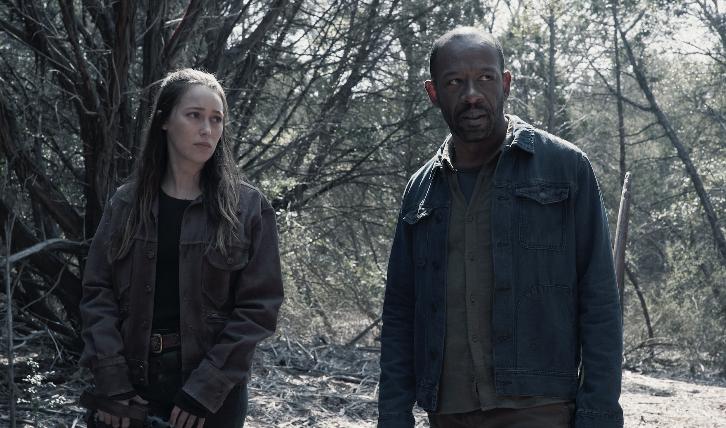 
Sneak Peek
TVGuide has exclusively revealed a sneak peek which is available here.

Alicia gets an invitation to Alexandria in this exclusive #FearTWD premiere sneak peek https://t.co/VrbgjcFLEw pic.twitter.com/uRaHrK2Jdo

Making of the Second Half of the Season Featurette

Among some of the new cast members in the back half of #FearTWD Season 4: @themocollins Aaron Stanford and Stephen Henderson #SkyboundSDCC

Episode Titles + Synopsis
Fear the Walking Dead - Episode 4.09 - People Like Us
Morgan tries to help Alicia and the fractured group of survivors as a storm brews.

Fear the Walking Dead - Episode 4.10 - Close Your Eyes
Alicia's forced to reckon with an agonizing past while seeking refuge from a storm.

Fear the Walking Dead - Episode 4.11 - The Code
Morgan's journey is derailed by some new acquaintances.

Fear the Walking Dead - Episode 4.12 - Blackjack
Strand and Dorie are marooned; Luciana aids a man in need; the group's efforts to help a stranger put everyone in danger.

Fear the Walking Dead - Episode 4.14 - MM 54
Difficult decisions lead the group into uncertainty; Alicia delivers on a promise to Charlie.

Fear the Walking Dead - Episode 4.15 - I Lose People...
The group's hope falters as they seek a way out; Alicia and Charlie reunite with friends.

Fear the Walking Dead - Episode 4.16 - ...I Lose Myself (Season Finale)
Morgan struggles to find the strength to help friends in dire need before it's too late.

Promo
Thanks to Ron for the heads up.

Return Date Revealed
AMC ANNOUNCES THE SECOND HALF OF “FEAR THE WALKING DEAD” SEASON 4 TO RETURN ON SUNDAY, AUGUST 12 AT 9:00PM ET/PT

NEW YORK, NY – June 11, 2018 – AMC’s original series “Fear the Walking Dead” will return for the second half of season four, consisting of eight episodes, on Sunday, August 12 at 9:00 p.m. ET/PT, as announced during last night’s “Talking Dead.” Critics have said “Fear’s” fourth season has “completely changed the game,” “…is deserving to be praised as one of the best shows on television, (Comicbook.com.), “feels like it’s been given a second life” (Hypable.com), and “has knocked me off the couch” (TV Line.com), among other critical acclaim.

The first half of season four began with one figure huddled around a campfire, and ended with nine. Characters who started their journeys in isolation collided with each other in unexpected ways and found themselves in one of the last places they ever expected to be…together. In the back half of the season they will explore who they are now – as individuals and as part of the greater group – and how they will forge ahead. They will find themselves pitted against new adversaries – human, walker, and even nature itself. Theirs will be a journey wrought with danger, love, heartbreak, loss, and ultimately, hope.