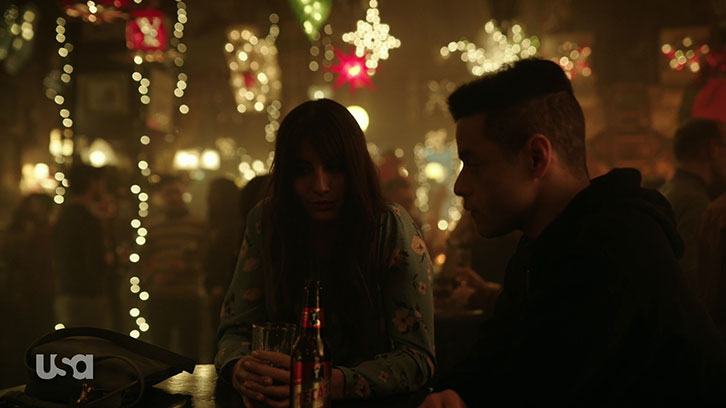 Just as expected, Mr. Robot delivered another fantastic hour of entertainment with its third episode of the season last night. Relationships were the name of the game, and they were beautifully crafted around the episode's title, "403 Forbidden". The episode was written by Courtney Looney and directed by showrunner Sam Esmail.

Whiterose and Elliot had the hour fairly neatly divided between them. Things kicked off with a flashback to when Zhang and his lover Zhi were negotiating a technology agreement with IBM. Though the American executives believed they'd arranged a profitable deal with the then Chinese representatives, other things were on the minds of the pair, one of which was stealing the technology instead of paying for it, which is a very Chinese thing to do, and the other was their relationship. In a time when homosexuality was frowned upon in China, Zhi couldn't take the pressure of trying to keep it quiet any longer, and ended up killing himself in front of Zhang. Not long before, Zhang had revealed his penchant for cross-dressing, which Zhi received surprisingly well. 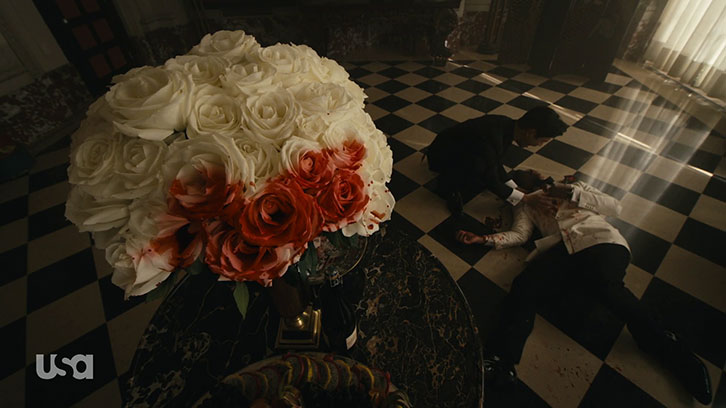 A transition to present day Zhang highlighted that he now wears his watch on his right hand, and also revealed that he still flashes back to the death of Zhi in his own mind. His present day scene was quite brief, but very important. Wang Shu warned against him calling a Deus Group meeting to elect a new CEO, and instead he told her to appoint Tyrell Wellick to the top job. There was also mention of the fallout following Freddy Lomax's death in the season premiere and Phillip Price's resignation possibly being connected, so now the Dark Army are keeping an eye on Elliot's every move.

Elliot didn't make an appearance until around a third of the way through the episode. When his moment finally came, he bumped into his former psychologist, Krista, who was less than thrilled to see him and couldn't get out of there fast enough. Elliot didn't intend for the meeting to happen, but he tried to thank her for her help and told her that he's doing a lot better, in addition to being sober. Given her last meeting when Mr. Robot showed himself, it's not surprising Krista didn't want anything to do with Elliot, but what this moment did begin to show is that Elliot does in fact have some emotional capacity, despite his handling of his mothers death, and that would be further fleshed out soon after.

Progressing the storyline of taking down Whiterose and the Deus Group came via Olivia Cortez, the U.S. based account manager for the Cyprus National Bank. After an argument with Darlene - who barely featured in this episode at all - Elliot broke in to Olivia's apartment on his own, eventually finding her work computer and realizing a code from a key fob was needed to log into the bank's systems.

I really enjoyed what happened next. Elliot, with Mr. Robot's help, began chatting to Olivia at a bar, where she had been stood up by another guy. Mr. Robot played the ultimate wingman, and one thing led to another and Olivia took Elliot back to her place where they spent the night together. Sam Esmail's use of top-down shots has been on point throughout the series, but he's taken the technique up a few notches in this fourth season. I've never seen the cliché ripping off clothes on the way to the bedroom scene shot like how Esmail did it in this episode, and then again when Elliot sneaked out of the bedroom with the key fob to text the code to Darlene. 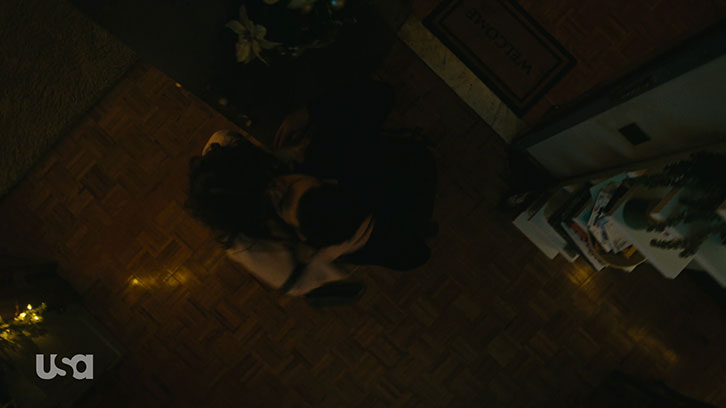 Elliot's interactions with Olivia came out of nowhere in the wider context of the series when you consider his entire existence at the moment is to take down Whiterose et al, but the ability to include such genuine vulnerability from both characters on a range of topics was fantastic to watch. It's hard to nail down why this part of the episode worked so well, but quality acting has a big part to play. Part of me doesn't see Olivia sticking around for long, but another part of me really wants that to happen. The coming together of the two characters isn't significantly different to that of Holden and Debbie from the first season of Mindhunter, which I think leads the pack with how you bring two characters together out of the blue and accelerate the deep conversations and intimacy right off the bat.


Now he's got the message. Letting people in doesn't have to hurt

The question for Elliot now is how expendable Olivia is in his bigger picture. Protecting Darlene is difficult enough as it is, and any relationships he has with anyone give the opposition powerful leverage. In his terms, he may have made a critical error.

Rounding out the big topics in this episode was the return proper of Fernando Vera. After Elliot bumped into Krista a man was seen appearing to track Elliot. Later, that man reported to Vera, who was busy dealing drugs out of a butchery. In a truly bizarre conversation, Vera asked for details on what Elliot was doing, and mentioned that he wanted to recruit Elliot to help with his new scheme, not hurt him.


I want him to be my partner.

The informant was dead moments later. Though Elliot might not be in life-threatening danger from Vera, he can't afford any interruptions, and the added threat to Krista, which is likely Vera's next port of call in tracking down Elliot, will also pose a potential roadblock.

The end of this episode was really exciting and ominous at the same time. After his time with Olivia, Elliot intended to meet Darlene back at the AllSafe offices but noticed he was being followed, so he decided to go home instead, like a normal innocent person would. When he arrived at the door he saw it had been broken into. Mr. Robot tried to convince Elliot to make a run for it, but Elliot opted to venture inside, only to find a flustered Tyrell Wellick. Elliot couldn't silence him quickly enough, so it's likely the Dark Army bugs heard him mention his relief to finally be in a good position to take the Dark Army down, along with everything it's connected to. 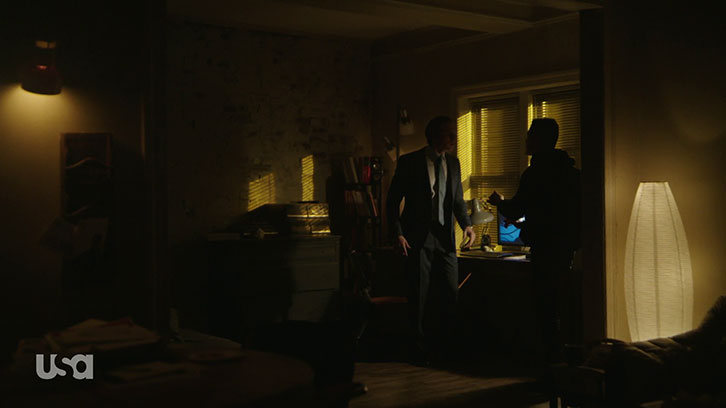 What comes of that slip of the tongue will have to wait until next week - the promo looks epic and I'm really looking forward to it. A special mention needs to go to Mr. Robot's voiceovers in this hour, which is a departure from Elliot's usual stints but is part of the shift towards Elliot and Mr. Robot working together. The differing perspective on Elliot's life and actions add another dimension to an already superb series.

All up, another excellent episode of Mr. Robot, with excellent writing, direction, cinematography, storytelling and character development. I hope Olivia sticks around but given the way this series is going, all that can probably be said is that her and Elliot were a nice early Christmas present for each other. As Whiterose would probably say, time will tell. Thanks as always for reading! Do share your thoughts and theories on the episode in the comments below, and I'll see you back here next week.