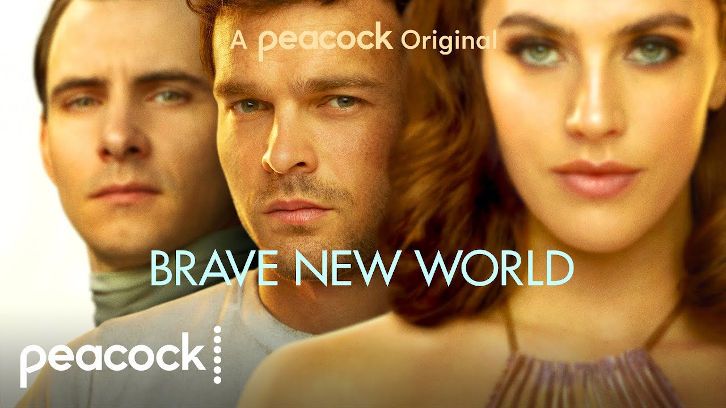 Disclaimer: Please note that the views and opinions expressed in this article are those of the authors and do not necessarily reflect the official policy or position of SpoilerTV.

"Based on Aldous Huxley’s groundbreaking 1932 novel, Brave New World imagines a utopian society that has achieved peace and stability through the prohibition of monogamy, privacy, money, family, and history itself.

As citizens of New London, Bernard Marx and Lenina Crowne have only ever known a rigid social order, a perfect pharmaceutical called Soma, and a culture of instant gratification and ubiquitous sex. Curious to explore life beyond the strictures of their society, the two New Worlders embark on a vacation to the Savage Lands, where they become embroiled in a harrowing and violent rebellion. Bernard and Lenina are rescued by John the Savage (Ehrenreich), who escapes with them back to New London. John’s arrival in the New World soon threatens to disrupt its utopian harmony, leaving Bernard and Lenina to grapple with the repercussions. The three become entwined in a fraught relationship that awakens them to the dangers of their own conditioning."

Full disclosure, I have not read the book (though it's on my to-do list), so I can't say for myself what stems from the original story and what's a take from the people involved in this translation to the screen. From what I've read, there are some changes to make it more appealing to today's world since the book apparently focuses more on the ideas than what usually makes a story compelling, like in-depth character evolution and a captivating narrative, but it loses the groundbreaking aspect to it, which is not exactly surprising given how long ago the book was written. Still, it does manage to present some philosophical ideas that were surely part of the reason why Huxley's book became a literary classic but trying to update some concepts and make some changes to some of the more problematic issues from Huxley's work.

Of course, by now, we've seen many of the main ideas reflected in other works of fiction (and non-fiction), and, though I think it’s fair to give props to the people who did it first, there’s a case to be made for the people who are able to take evergrowing tools and knowledge and explore those ideas finding nuance and correlation to different issues without fear of being called out for unoriginality. After so many years with the ability to record pretty much every single story created by every single person who decided to write one, it feels like we should stop expecting originality in every single one of them and perhaps look for new things in different aspects of these new stories.

Because the truth is, we seem to compare everything to everything else, and then a "remake" ends up being the only thing that can copy aspects of something without getting hate for it, but then, it gets hate for not being exactly what people pictured in their very diverse minds. It seems we have cornered creativity in a way that’s contradictory, and a place where there’s no winning, perhaps monetarily, but surely not in the eye of the critic.

With that in mind, I will still try to express what I thought were highlights in this re-imagining of a classic and which aspects didn't really help it reach its full potential. Showrunner David Weiner (Fear the Walking Dead, Flesh and Bone, Homecoming) talked in interviews about how Huxley was afraid of a world in which people would become so sexually stimulated, so pharmacologically numb and so distracted by entertainment and media, that they would fail to look within and beyond themselves in uncomfortable ways. I'm sure this rings especially true today, and though it takes no brownie points from Huxley, this does make sense as the natural evolution of the world for someone who seemed to understand capitalism as a sort of addiction that tends to only want more and more without regard for the perhaps inevitable collapse of every system, including itself.

Here we see it with Indra, her focus here is to create the perfect society to the point where she, herself, has no place in it, but it's still unable to stop the revolt of the human beings embedded in that system. In the final episode, Bernard Marx and CJack60 have one of the clearest debates about the system they were both in, CJack60 confronts Bernard about it saying everything in the system is set up to facilitate the life of the Alphas, but Bernard says he's not to Blame, Indra is. Now, the thing is, as long as the system benefits some with enough power to tilt the scales, there is no way to truly change it because those will tend to defend that which made their lives easier and more enjoyable.

Probably every theme touched upon in this story hit especially home in a time where "normal life" screeched to a halt for so many who were forced to face the music, or perhaps more accurately, the silence. But even that isn't fully the case, because we can usually find something that makes enough noise to keep us from thinking too much, from questioning things that have been a given for so long we can hardly think of any other possible way of life. A TV show pondering the dangers of entertainment as a drug to keep us from discomfort is its own brutal paradox, but that only makes the point it's making even more relevant.

We usually need to feel like we have some sort of understanding of the way the world works to build a baseline in our minds, to feel like we know what's normal and what's a red flag, but there will always be many defying that, questioning the norms, asking why they're there and if there's a need to break the bones of our structure to reset them in a better way, and also ask ourselves the purpose of that change. This is a recurring theme in Brave New World and it was perfectly shown in their depiction of the amusement park but also in the book Lenina was reading about it and some of the more museum-like aspects of the trip.

The fact that so many things were mischaracterized and misunderstood also casts a shadow in the things we think we know about the past, there is a reason why we fictionalize history so often and the truth is, some things seem to lose meaning when there's no real way to know for sure. Because if there's one thing we've seen in the last few years is that every story has its own perspective and human recollection is subjective, so, how can we claim to know the history of our world? We learn new and contradictory things about the past so often it's no wonder why we question our very foundation.

And so do the characters on the show. Knowing that they're all less two-dimensional here surely helps tell the story, and the great acting can't hurt, but there were some things that felt a little out of place. I am glad they gave Lenina more agency, and that they showed John was no hero even if they did try to make everyone more likable, but Bernard was a little too confusing, and even if his being confused himself can be seen as an excuse, his character development is so uneven that it just got frustrating.

Also, don't even get me started on Henry who's journey was completely senseless, and Sheila as the head of the revolution in the Savage Lands was completely cartoonish, which seems at odds with the intention to keep the show going. Not to mention one of the biggest issues in the show, the whole story with Indra, Mustafa Mond, and Elliott, made no sense, it looks like they tried to update the logic of the system but got tangled in their own web and tried to add some emotion to it but failed on both counts.

Regardless of the faults in this adaptation, there's still enjoyment to be had in watching the story unfold and there's always something we can take away from the questions it poses. Sadly, the show seems to have come and gone without much fanfare, perhaps there's no real interest in this catching on by our great algorithms, or perhaps there's less interest in a utopia/dystopia when it feels like we're living in one. In any case, this is a subject we probably shouldn't drop anytime soon but perhaps this will not be the conversation starter the creators probably intended.

What did you think about the show? Let me know in the comments.