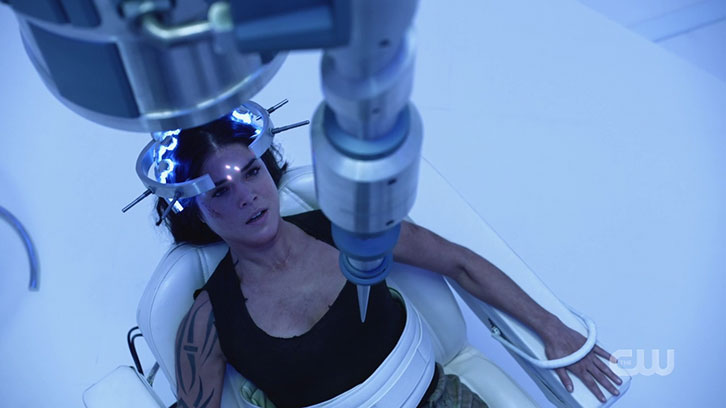 The 100 aired what I believe to be its first ever completely Clarke-less episode last night. It was also likely the most sci-fi episode to date, which had its good and bad points. "Welcome to Bardo" was written by Drew Lindo, with Ian Samoil directing.

The hour took place over two different time zones, one in present day, and the other in flashbacks building towards present day. The action-packed opening minutes in flashbacks saw Octavia fight off the Disciples who brought her through the anomaly back in the second episode. Diyoza was also brought through the anomaly, but the only time we saw here was just as Octavia was beginning her assault. I think to keep the storyline coherent, Diyoza really did need to feature much more substantially in the episode than just this split second.

Anyhow, Octavia was soon recaptured, but her temporary escape did have me thinking that she was in some sort of simulated environment. She spent the next portion of the hour entertaining a Disciple scientist, aka a 'conductor' who took a liking to Octavia's rather eventful memories. The VFX teams had their work cut out for them, with much of the technology being used by the Disciples being virtually viewed and manipulated. Some decent set design also needs crediting too.

One of the more common issues with The 100's storytelling did present itself here, and that's that Octavia's stint as her memories were read lacked emotional engagement. Her memories of Bellamy, Hope and some other characters felt quite procedural, I did get the feeling that part of the reason for that was because Octavia does put emotions to one side when needed, but that's not entirely to blame because even when Levitt reached the climax moment in which he said he believed that Octavia's heart was pure, that should have had more impact as a character developing moment than it did. 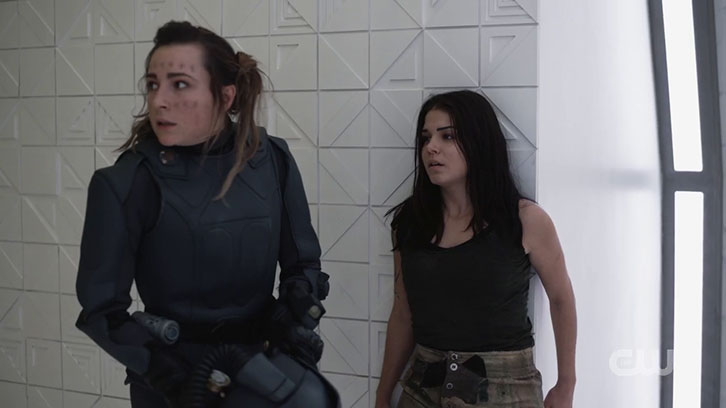 Eventually, Hope made it through the anomaly - lining up with her first passage seen in last week's episode. That didn't last long though, but Hope did manage to return Octavia back to Sanctum. The next thing we know, we pick up where last week left off, with Gabriel, Echo and Hope (again) arriving on Bardo through the anomaly, with much more bloodshed this time around thanks to the newly devised plan the trio formed while on Skyring. The trio didn't succeed in finding Diyoza, with Hope forced to return to Sanctum and retrieve Octavia for a second round of interrogations. Clarke remains the ultimate goal for the Disciples, and it took Bellamy's unexpected return when he was discovered holding hostage his own conductor for Octavia to finally offer to reveal what she knows about Clarke. Bellamy vanished as quickly as he appeared though, with a grenade activated by a Disciple seeming to vanish him into thin air. Subsequently, Echo flew into a rage, murdering the conductor in cold blood, and showing very real signs she may go rogue in order to find Bellamy.

For The 100, the storytelling in these scenes was the most complex I can remember, and I think the inexperience really showed here. It's very difficult for viewers to suddenly have to connect pieces of an episode back to a previous one multiple times in an episode when they've never had to do that on such a scale before in this series. It certainly caught me by surprise, and the showrunners would have been better off scrapping the Sanctum storyline from this hour entirely. This really should have been an episode that was focused entirely on Bardo, with more time taken to build in some extra context and missing moments, such as what happened when Hope arrived on Bardo the first time, before she reunited with Octavia, and prior to that, Octavia's first arrival also deserved more fleshing out, or better again, including Diyoza.

Surprisingly, the Sanctum storyline was more bearable than I expected, especially given Clarke is no longer present there. Perhaps the key was its simplicity in structure, which saw Russell's followers threaten to burn themselves alive on the hour if he wasn't released.

Murphy and Emori were classy throughout as they used their Prime status to their advantage to control both sides of the debate. Murphy even suggested Russell's faithful should be left to kill themselves off, which I, too, didn't think was a bad idea. 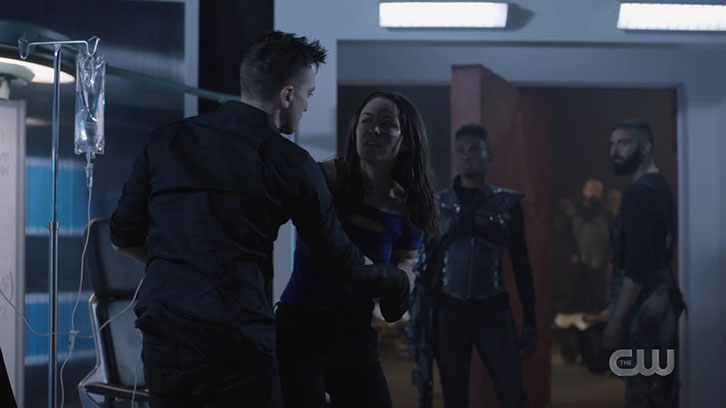 Emori initially volunteered to go and talk to Russell's faithful, but she was still battling health issues from radiation caused by the reactor meltdown a fortnight ago, so Murphy went into the lion's den, but was lucky to escape alive when Russell and Emori intervened after wondering why he hadn't returned. Indra had a bigger part to play in the episode than usual thanks to Clarke's absence, and I was mighty pleased when she picked up on the subtle cue given away by Russell that it was in fact Sheidheda possessing his body. Removing the mind drive from Russell's body was a very smart move because it prevents Sheidheda from being able to inhabit a new host should his current one die. Or at least that's the theory anyway.

All up, this episode was about average in terms of watchability and engagement for me, despite the significant uptick in what could be considered sci-fi content and themes. I do think the Sanctum storyline should have been nuked in favor of a more evenly paced and detailed approach to explaining the happenings on Bardo though. My favorite aspects of the hour would have been the set design and VFX, which were a step or two up from the usual. Most importantly, I'm pleased that Sheidheda's cover has been blown, because it brings us that much closer to him and his awful storyline being gone for good.

As always, thanks for reading. I hope you're staying safe wherever you are in the world. As per usual, if you have any thoughts and theories on the episode, be sure to share them in the comments below. I'll see you right back here next week.