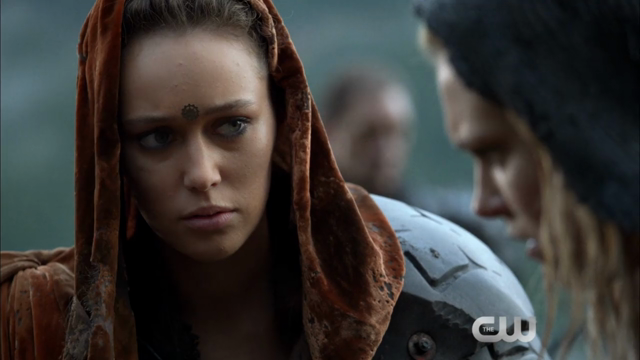 
Interviews
Thanks to miracle2012 for the heads up.


What scenes do you remember not being comfortable with?
Really any of the torture scenes. I didn’t feel comfortable torturing Ricky [Whittle, who plays Lincoln]. I personally don’t like guns at all, so pointing a gun at someone or having a gun pointed at me makes me feel very unbecoming. I think they’re a scourge. It doesn’t fill me with joy, being the gun guy. He loves guns, he loves fighting, and I’m like, “Ahhh!” [Laughs]

Clearly, Bellamy’s story this season has plenty to do with Pike and the Arkers. What else can you tell us about the rest of season 3?
There’s the issue of sustainability and there not being enough food. That’s going to be a major issue for everyone on the ground. Though that’s not being touched on that much, it is what drives Pike … Alie’s obviously one to watch out for, she plays a huge role. Season 3 gets quite sci-fi, and even I and the rest of the cast would have to really read and reread the scripts to make sure we’re all following what’s happening with the artificial intelligence world. Luckily for me, Bellamy was pretty in the dark about that whole thing, so I could play dumb quite easily. … Watching Bellamy kind of get a bit left behind [the high-tech world] is fun. His story was always kind of low-tech.

On this show, when people have done terrible things, it’s typically in response to an immediate danger. There is an immediate need to take action. But Indra’s forces are not beating down the gate and murdering people in Arkadia.

Right. They don’t believe that though. They don’t know if they’re going to tomorrow. They don’t know, and Pike does not believe, that the grounder army that’s parked outside their door is going to be a good thing. I don’t want to spoil too much, but a few episodes later events unfold where had he not done that and that army was still there, they’d be f——d.

Yes & guilt & doubt & remorse & resolve. There are scenes upcoming where @WildpipM plays 12 emotions at once. So good. @stewdrottngu #The100

What does this new Bellamy mean for the progress he’s made as one of the show’s "good guys?"

That’s based on what your perspective of the Grounders is. We know the Grounders are not all bad. But Bellamy’s worldview is formed by the fact that when has a grounder ever proved they’re anything but hostile? Lexa abandoned them and left him to die at Mount Weather and he lost friends because of that. They attacked him personally, mercilessly in season one. But they had their reasons for doing it. So for Bellamy, it becomes under the influence of Pike.

Pike, this season, shows up and he has a different view that’s informed by a different set of circumstances that are 100 times worse than the experiences our heroes have had. Bellamy becomes influenced by Pike’s view and his charisma, especially after he loses Gina. It’s a dark turn but I don’t think he’s a bad guy.

What does this mean for his relationship with Octavia (Marie Avgeropoulos) and how will people react?

In season one, Bellamy was out for himself and doing things to save his own ass. In season three, he’s doing what he thinks is right for his people. He’s a soldier for a cause but he’s not acting selfishly. Hopefully there’s a little difference. It’s still dark; it’s still going to be hard for people because Bellamy in season two really became a shinning, pure good guy. He was too good on some level. We wanted to take him back to a darker, morally more complicated place and still hopefully love him. And put him on the other side of Octavia. That was the bigger sort of dramatic challenge and something that I really wanted to try and do — see how far could I push them.