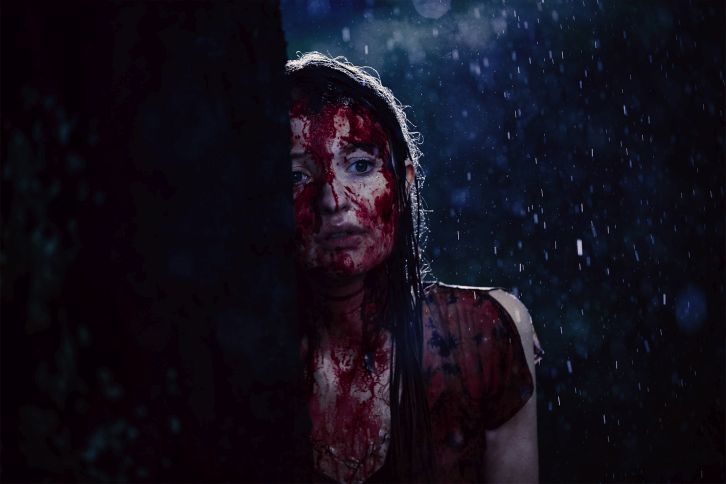 The story of Laura's life and death is explored, including her first encounter with Shadow and how exactly she came to be sitting on the edge of his motel room bed.


"To portray Salim and the Jinn in a way that's sex positive for a gay man who comes from a country where homosexuality is punishable by death and you can be thrown off of a rooftop," he explains, "it was very important to us to look at Salim's story as a gay man from the Middle East whose sexual experience was probably relegated to back alley blowjobs and didn't have an intimate personal sexual experience. In the book, Salim blows the Jinn in the hotel, and then he's gone. It was important for us in this depiction to have Salim drop to his knees and prepare to achieve sex the way he'd been accustomed to, and the Jinn lifts him off of his knees and kisses him and treats him much more soulfully and spiritually to change his perception of who he is and what his sexual identity has become. That felt like it was empowering in a different way, showing a protagonist as the one who is being penetrated. That comes with all sorts of preconceptions of gender roles and what it is to be a gay man at the same time."

"What we wanted to achieve there is for an audience who might not necessarily be accustomed to seeing two men having sex, to recognize it as a beautiful thing," the writer continues, "as opposed to 'Ooh, Alec Baldwin is kissing that old man!' Or, 'Whoopi Goldberg is touching that woman's hand, what does it mean?' I've been seated in that audience as a gay person, and resented the cringing and cajoling and jeering of audiences, and wanted to show a Middle Eastern gay kid who might find this [show] somehow and see that scene and realize there are people out there who don't think he's an abomination."

Source:
Read More on THR
EW recently moderated a Paley Center panel on behalf of Starz and GLAAD, screening the May 14 episode and exploring its content with the actors, executive producers Bryan Fuller and Michael Green, and the author of American Gods, Neil Gaiman, who described the experience watching the finished onscreen result as “absolute amazement and absolute joy.”

He recalled writing the scene 18 years ago, inspired by a New York cab driver who did, in fact, fall asleep at the wheel and admit to having been driving for 30 straight hours. “Afterwards, I just thought, that’s awful. The idea that some guy, in order to make a buck, was that pushed. And I think part of it may have come from reading the whole of One Thousand and One Nights, particularly the [J.C.] Mardrus and [Muhsin] Mahdi translations. I think it was the first thing that I’d ever read where I went, you know, there’s an awful lot of this sort of homoeroticism in the Arabian Nights. It was this really interesting part of Arab culture that I had never thought about, that I was learning about. And that had sort of stuck. And at that point, I wanted a genie in American Gods…and, I think it’s going to be a gay relationship… and after that it just kind of wrote itself. It probably wouldn’t have written itself quite so sexily, had I not read lots of Edmund White and Armistead Maupin and gone, ‘Okay, well, I can do that!’”

Source:
Read More on EW
“When we first shot it, you know, when you’re an actor and you get this kind of role, you’re like, ‘Yeah, I’m gonna get in shape…'” explains Abtahi, who has known Kraish for 10 years. “So we had shot the scene, and I think it was two months later and I was mid chocolate chip cookie when I got Bryan’s email that we need to shoot this again. I was like, ‘Oh crap.'”