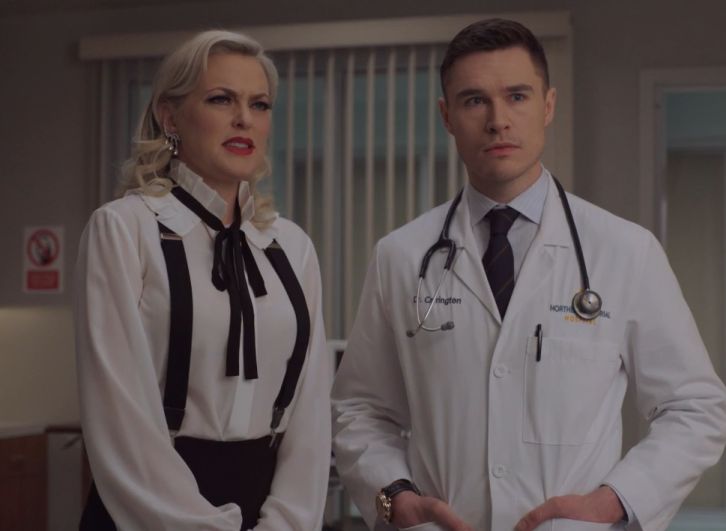 A mixed designer bag of a “Dynasty” episode, “Is the Next Surgery on the House?” finds Adam and Alexis practicing bad medicine, Fallon scheming to paint Heidi as a bad mother, and Blake and Cristal struggling to move on from their past bad behavior.

Picking up where last week left us dangling, Jeff wakes up in the hospital with his wife and stepson hovering over him. While Alexis tries to shift the blame to the supplements he’s been taking, Jeff is immediately suspicious that Adam is responsible for his current condition. But while trying to cover his tracks, Adam realizes that Jeff is in worse shape than they originally thought – he’s in early liver failure. Unfortunately (yet conveniently for the plot), Jeff has a rare tissue type that makes transplant options tricky. None of the Colbys are a match (still miss you, off-screen Monica!) and the only Carrington who could donate is Adam himself, who nixes it because he already donated a piece of his liver to his adopted mother, which makes it dangerous for him to do so a second time.

Attention turns to stealing a potential match from a terminal patient, but after some shenanigans that aren’t as fun as the show thinks they are, it metaphorically slips through their fingers. And so it looks like Jeff’s ticket might actually get punched. But in a rare selfless moment, Adam decides to take the risk and donate a piece of his liver anyway. I...don’t know what “Dynasty” was trying to do with this story. It ultimately feels stake-free because, even though it ends with a worried Alexis sending her boys into surgery, it doesn’t seem like this is meant to dispose of Jeff or Adam. Was it to further redeem Adam, or to set up future conflict between Alexis and Jeff when it comes out she’s the one who drugged him? It also weirdly felt like it was taking place in a vacuum (i.e. Dominique being completely off-screen, Blake not being told his son was undergoing life-threatening surgery, etc.). Finally, the show really seemed to be going for something emotional and sincere here...which is not what “Dynasty” should be doing.

Anyway, on to a storyline that was more successful. Having done a total 180 on wanting Connor in their lives, Fallon and Liam are dismayed to learn during a meeting with a Van Kirk lawyer – preceded by a delightful bitchfest between Fallon and Liam’s mother Laura, btw – that Liam signed away his parental rights, which will make it challenging to pursue custody through the courts. A soft-glove attempt to get Heidi to stay in Atlanta also disappoints, as she’s adamant about returning to California with Connor. But fear not, Fallon knows just who to turn to for assistance. “I need your help to do something dark and borderline illegal that no can find out about,” Fallon proposes...to Blake! I found this turn of events awesome, as Elizabeth Gillies and Grant Show play off each other so well and we haven’t gotten a ton of Fallon/Blake interaction lately. 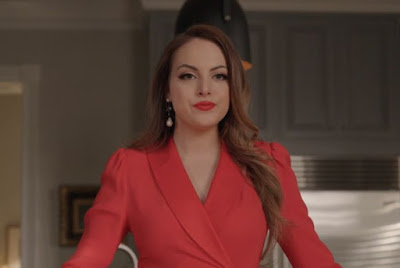 Unfortunately, there’s not much dirt to dig up on Heidi. Even her squirreliness about where she fled to amounts to nothing (except a screen time-wasting jaunt by Fallon and Blake to a woo-woo women’s retreat). So instead, Fallon decides to “go buy some bones and build [their] own” skeleton to chuck into Heidi’s closet. To that end, she runs a pretty low-level con on Heidi that gets her pinched by the police for car theft (I did like the small touch that Liam not only knew what Fallon was doing, but helped her pull it off). Between that and her briefly abandoning Connor, Fallon and Liam suggest they have enough to challenge Heidi in court unless she compromises and stays in Atlanta.

But that’s when things awesomely kick up a notch, as Heidi crumbles and drops a deliciously soapy bombshell on them. Turns out Connor’s not Liam’s son...he’s his little brother! Because Heidi had a brief affair with Liam’s dad! And given Sharon Lawrence is guest starring this week, it’s not a huge shock to learn that Laura knew the whole time. Finally fed up with his mom’s meddling, Liam cuts off contact with her, to Fallon’s smug delight. But Laura isn’t throwing in the towel yet. In the episode’s very sudsy cliffhanger, she stomps into Blake’s study in a shiny dress and announces that she’s the final vote needed to clear any sale of Carrington Atlantic by Van Kirk Industries. And she promises to ensure Blake gets his company back if...dun dun dun!...he breaks up Fallon and Liam. I really liked this development, as it leaves Blake with quite the soapy conundrum, and it pulls those separate story threads together as we head into the final stretch of the season.

While Blake contemplates doing something very bad, Cristal remains determined to start doing some good. Her plan is to open a rehab clinic for veterans under the Carrington Foundation name, but first she needs to convince the hospital board to sign off on the project. She gets frustrated, though, when she’s stood up for a meeting with an influential hospital chaplain she needs on-side and ends up venting to slash flirting with a handsome stranger. Because you’ve seen TV before, it’s no surprise that said stranger ends up being Father Collins (Wil Traval, “Jessica Jones”), the new hospital chaplain, who has no interest in greasing wheels for the Carringtons. A sincere “confession” from Cristal gets him to come around, but between his admission that he was totally flirting with her and the tension building between her and Blake, I’d say we’re heading into some “The Thorn Birds” territory here. 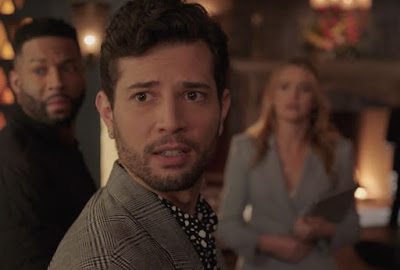 Last and definitely least, the Sam subplot. While planning an Atlantix event at La Mirage with the help of a bored Kirby, he is rattled by a skeleton from his season one past I had totally forgotten about – Ramy (Mustafa Elzein, “Almost Family”), who Sam sold out over a robbery at the Carrington manse. Sam reluctantly agrees to let Ramy stay at the hotel, even giving him a second chance after he’s caught stealing the league commissioner’s watch during the party, but it’s clear Ramy’s here to stir up trouble for Sam. Also, there was apparently friction between Kirby and Culhane over their breakup that they’ve now squashed? Ugh, who cares.

Now that I’ve sliced up this week’s “Dynasty” with surgical precision, come share what you thought about “Is the Next Surgery on the House?” in the comments section.