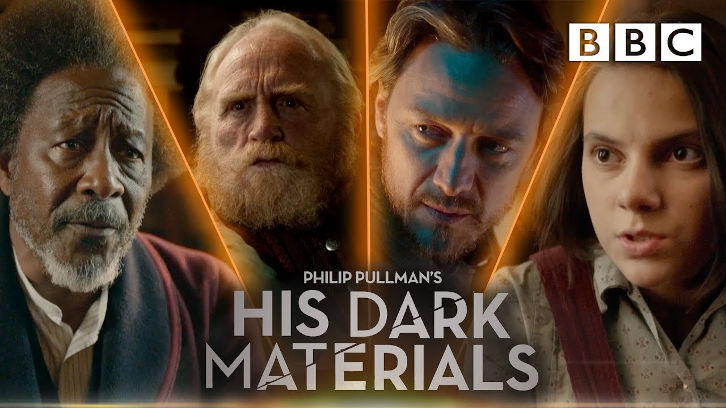 His Dark Materials may have jumped ahead on something that fans of Phillip Pullman’s series were not expecting to happen until the second season, introducing a whole new arc that takes the series in a riveting new direction whilst at the same time, not managing to lose focus on any of the Lyra-centric narrative that focuses on her interaction with Mrs. Coulter at her fancy London apartment, which instantly – seen through the eyes of a child, looks like the best thing in the world.

I remember playing the PS2 Golden Compass game back when it first came out around the release of the film of the same name and finding these levels really hard when I was younger for some reason (in fact, the whole game was unnaturally difficult for something based off a movie adaption of a children’s book, especially towards the end), so seeing Lyra sneak around Mrs. Coulter’s apartment as the truth about her character and how duplicitous she is came to light was more tension inducing than ever. Mrs. Coulter deceptively positioned herself as the saviour for Lyra rather cleverly, believing that Lyra is going to use her resources to help rescue Roger from the Gobblers, who have come to the city as well, but secretly behind the scenes, she is not just helping the Gobblers - she IS the Gobblers (Adele Starminster is the one who breaks the news to Lyra that the Gobblers are The General Oblation Board). She’s in control of their operation, talking to the children and positioning herself as their saviour, encouraging them to write letters to those left behind. She sells their kidnapping as taking them on an adventure, to the place that Lyra has always dreamed about – The North.

Roger is insistent that Lyra will rescue them and his reunion with Billy was a fun one even if the Gyptians continued attempts to find him leads to a failure, despite them being close behind the Gobblers. Hopefully the show gives his character room to breathe rather than ignoring him like the movie did, because the relationship between Lyra and Roger at heart was one of the stronger narratives of The Northern Lights in their brief scenes together. Roger’s importance to His Dark Materials cannot be ignored and getting the show to work as effective as it has been is in part due to the fact that he hasn't been underestimated, so it’s good to see writer Jack Thorne not losing faith with that storyline and keeping his character front and centre to the narrative. One of the best things about the show so far has been the consistency between the two episodes, they feel more like they were made to binge more than anything else and it's something that I'm already keen on revisiting once every episode is out.

It’s now time to get to the biggest draw of the episode for me; the alternate Oxford. Seen through the eyes of Lord Boreal, who was denied access to the head of Stanislaus Grumman, we follow him into an Earth that looks like our modern-day world, people eating in coffee shops, and so far, unaware of the daemon that Boreal has to have close to him at all times. If anything, these scenes on our Earth looked like something out of Line of Duty (wouldn’t it be fun to see Ted Hastings’ reaction to learning about the multiverse at some point?), with it being clear that Boreal has been there for some time and is well established outside of the Magisterium’s reach, hiring a mercenary to hunt down Grumman in the process.

Another big revelation came this episode, assuming that we believe Mrs. Coulter – is that Lord Asriel is Lyra’s father, not her Uncle. Even before Adele tells Lyra about the Oblation Board being the Gobblers, Lyra and Pan are suspicious of Mrs. Coulter and her monkey daemon – it feels unnatural to them that Mrs. Coulter’s daemon can be so far apart from her although as of yet no reason is given – and it’s enough to see them at odds with each other. The partnership was never going to last, Lyra is too stubborn and fiercely independent, which clashes with Mrs. Coulter’s controlling vision for her (no matter how much great chemistry Ruth Wilson and Dafne Keen have together), so to see it come to an end this episode when Lyra escapes only to be kidnapped (whilst Adele’s truth-telling to Lyra sees her daemon killed in front of her in a remarkably cruel way, heartbreakingly so as every new daemon that I see I’m instantly attached to) sets an interesting precedent for the next episode. It’s hard to speculate much more about what will happen as I’m doing my best to keep this future proof in regards to what happens for the books, but The Ides of North took one big step forward in setting up the rest of the series, arguably working even more effectively than the first episode, fresh from the expositionary heavy narrative that was required to make audiences feel at home with Lyra's world.