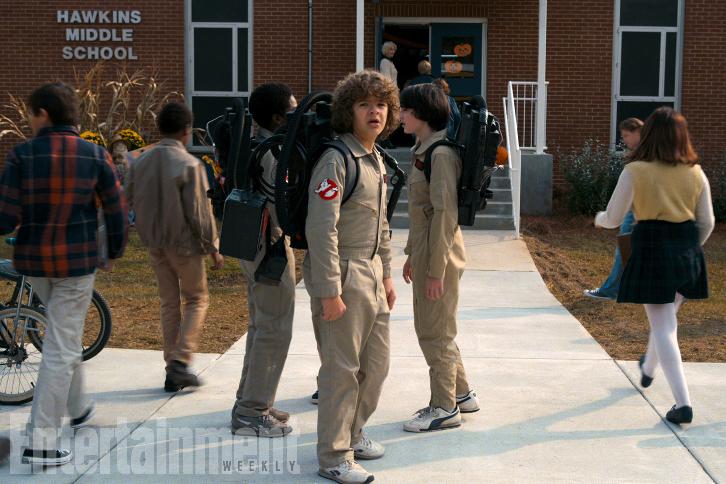 Note: Please click the links below to read the full article which has the full synopsis etc.


Stranger Things season 2 begins nearly a year after the first installment, on Halloween in Hawkins, Indiana. (The boys are going as the Ghostbusters, naturally.) Will has rejoined his pals after being rescued from Things’ alternate dimension, the Upside Down. But all is not well with young Mr. Byers, as evidenced by the slug he coughed up in season 1’s final moments. “He seems to be seeing images from the Upside Down—the question is whether they’re real or not,” says co-creator Matt Duffer. “So it seems like he’s having some sort of post-traumatic stress disorder.”

His ultra-fraught mother, Joyce (Winona Ryder), is attempting to make things stable for Will and his brother, Jonathan (Charlie Heaton), and she is dating an old high school classmate, Bob (The Goonies’ Sean Astin). “She’s trying to mask a lot,” explains Ryder. “I think she’s made this choice with Bob because she wants a good father figure in her sons’ lives.”

Meanwhile, Hopper (David Harbour) is attempting to keep all the events of last season, like the disappearance of Barb, a secret in order to protect Joyce and the kids. “It kind of falls on Hopper to be the voice of authority to say, ‘This did happen and this didn’t happen,’” says Harbour. “He’s struggling with the compromise that takes him to, having to lie and cover things up.” Siblings Nancy (Natalia Dyer) and Mike are also much changed and mourning the (seeming) deaths of friends Barb and Eleven (Millie Bobby Brown). “She and Mike are both the most screwed-up because they’re the ones who both lost someone,” says co-creator Ross Duffer. “They’re both grappling with that, and we see the effects.”

Source:
Full Article on EW
“I want people to know that she’s back and she’s a major part of the season and not know how or why,” says co-creator Matt Duffer. “We do get into her story and backstory. We learn about where she came from and how she came into the world and the program that resulted in her.”

Adds Brown, “She has a storyline this season for her, and it’s an emotional transition. Last season I didn’t get to expand [on the character] — this season is giving me that opportunity.”

Hold on to your Eggos! Your exclusive first look at #StrangerThings season 2 is officially here: https://t.co/VX7a2uOwtP ???? pic.twitter.com/stAY6xGzuC

Football shmootball. Now there’s an even bigger reason to tune into the Super Bowl this Sunday on Fox: EW can exclusively reveal that Netflix’s pop culture phenom Stranger Things will air a new teaser during the massive sports event.

The second season of Things takes place in 1984 — one year after the events of the first season — and has been shrouded in secrecy aside from a few details. But executive producer Shawn Levy (Arrival) did offer EW this tease: “The Demogorgon was destroyed but evil wasn’t.”