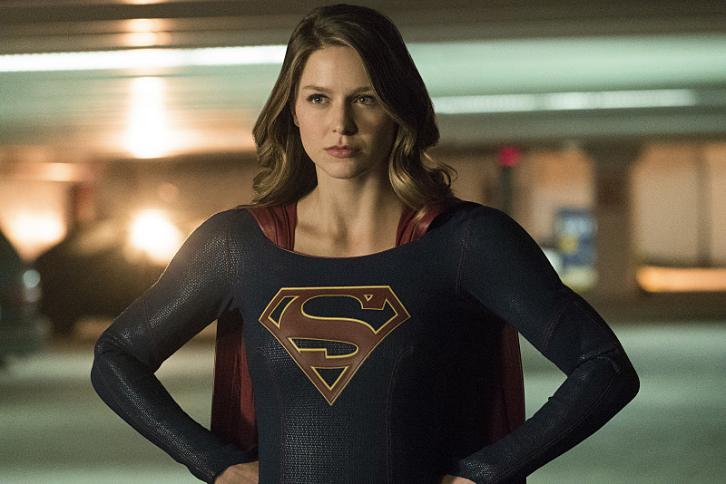 Sneak Peek 3
Thanks to Phun for the heads up.


Sneak Peek 2 & Inside the Episode
Thanks to Phun for the heads up.


Sneak Peek
Thanks to Phun for the heads up.

THE GUARDIAN DEBUTS IN NATIONAL CITY – The Guardian debuts to lend a hand after a parasite alien drains Supergirl (Melissa Benoist) of her power. Mon-El (Chris Wood) considers a less than desirable new career which then leads him to contemplate his motives. Alex (Chyler Leigh) struggles with a new reality. Andrew Kreisberg and Caitlin Parris wrote the script based on the story by Greg Beranti. The episode was directed by Larry Teng (#206). Original Airdate 11/14/2016.


However, Kreisberg says that hasn't factored into Alex's narrative. "Well, they're not dying, either of them, so we're not really thinking about that right now," he says.

While Kreisberg admits he didn't know about the term "Bury Your Gays," he promises that producers made sure to "try to be as truthful and real as possible" when it comes to writing Alex's coming out story.

"Especially on a show like Supergirl where there are so many fantastical elements, we try to make sure that the emotions are as real and true to life as possible," Kreisberg says. "That's just the same litmus test that we apply to Alex's coming out story. We just wanted to make sure we were telling the story in as respectful, educational, entertaining and thoughtful way as we could."

Source:
Read More on THR
TVLINE | The chemistry is even stronger between Alex and Maggie, which is a relationship I’m really enjoying. Will her growth continue to happen organically in baby steps?

We take our responsibility as storytellers very seriously, and we wanted to make sure we were telling a story that was true and real and emotional and entertaining, being respectful of the journey that Alex is making. We didn’t want it all to happen in one episode, so it’s been happening at this pace very deliberately. Hopefully people are on board for Alex’s journey.

TVLINE | I have to imagine that Chyler Leigh was very much on board.

As an actress, she thought, ‘Great,’ because it’s more for her to do. She was fantastic about it, and she’s been turning in these heartbreakingly devastating performances week in and week out. I’m not sure we would have even tried it if we didn’t have someone as talented as Chyler playing the part. It’s those little moments, the way she looks at Maggie or doesn’t look at Maggie, when you can see everything that’s inside of her. We’re so proud that a show like Supergirl can be telling this kind of journey.

TVLINE | Are any of those “little moments” coming up in the near future?

Yeah, Episode 6 is a really big episode for Alex, and for that storyline. We’re so proud of that episode, which is called “Changing.”

Source:
Read More on TVLine
Why was it important to explore an LGBT relationship on Supergirl in particular, especially in a season where you’re exploring themes of hate?

I don’t think we made the conscious decision to, like, “Okay, great, we’re going to do this now on Supergirl,” I think it was specific to Alex. At the beginning of the season for every show, we sit down and say, “What’s the most interesting thing we can do for any of these characters?” For Alex, this just seemed like a natural fit given who she was. As I said, it was a way to explain who she was and how she came to be. It seemed like an exciting world that was opening up for us. The only thing that makes Supergirl probably the ideal show to do this on is there is a level of reality to the Supergirl world — maybe even more so than some of the other shows, because so much of it takes place in nonsuperhero places, like CatCo and the sisters’ world — that it felt like it wouldn’t be having to compete as hard with the more fantastical elements of the show.

How will Kara react to this?

She is obviously going to be extremely open to it. Kara’s reaction is interesting. She feels a little sad, but entirely because she feels like so much of the sisters’ lives have been about Kara, have been about protecting her, keeping her secret, making sure she’s safe, and last year, this journey for her in becoming Supergirl. She feels like she created an environment in which Alex never felt comfortable discussing this stuff, so she laments that. She also says to Alex, too, that she understands what it’s like to turn off a part of yourself to go along and get along. It only makes the sisters closer.

Supergirl is a show where danger is ever-present. Following last spring, when the Bury Your Gays trope was thrust back into the spotlight, how nervous were you guys to tell this story? Is that something you talked about in the room?

No, I didn’t know that was a thing. I think we all are bringing our collective experience to the writing, and just trying to be as sensitive to the topic as possible. Obviously having Greg [Berlanti] as a leader and a guiding force has been invaluable.