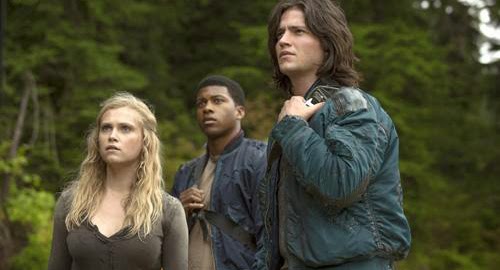 Tonight's third episode of The CW's The 100 is the episode in which things on the ground and on the Ark grow in complexity. Thanks to The CW, SpoilerTV has access to screeners for several of the season's episodes, so we can bring you a bit more content than we normally can for many of the other shows we cover. Our roundtable discussion for the third episode has questions by Jimmy Ryan, with comments thanks to Babar Suhail and Daniel van der Veer. The opinion poll is further down below.

Jimmy: This week’s episode ventured into much darker, sinister territory than the previous episodes, and featured some tough decisions that were made by several characters. How well do you think this was executed?


Jimmy: Flashbacks are clearly the best way of telling the story of life on the Ark before the 100 were sent to the ground. Were you happy with what you saw in this episode, or do you think more was needed?


Jimmy: Two minor characters with what seemed like increasingly important roles in the series were killed off in this episode, which would, no doubt, have come as a bit of a shock to many viewers. What are your thoughts on their deaths?


Jimmy: It’s clear Clarke holds an enormous amount of bitterness and resentment from the events that led to her father being floated. Were you satisfied with the character development of Clarke and others in this episode as we learned a bit more about past events?


Jimmy: The introduction of Charlotte demonstrated that the 100 are comprised of a wider demographic than most would have foresaw. Your thoughts on this?


Jimmy: As the series begins to push the boundaries of moral versus law, if you were in the shoes of Jake, Clarke’s father, what course of action would you have taken if you’d been made aware of a critical system failure?


Jimmy: Do you have any other thoughts you’d like to share about this episode or the series in general?


That concludes the roundtable for episode 2 of The 100. Feel free to share your thoughts in the comments below! If you're curious about something, or want to pick our brains for spoilers, follow us all below and send us a tweet!


On next week's episode, titled 'Murphy's Law', the fallout from Wells' death divides the colony as Clarke and Finn go on the run, and a new form of justice is dished out. Abby puts everything on the line in order to succeed in her quest to get to the ground, but things don't go according to plan

Thanks for reading and voting! See you all next week for the roundtable of 'Murphy's Law'.
The The 100 roundtable team.