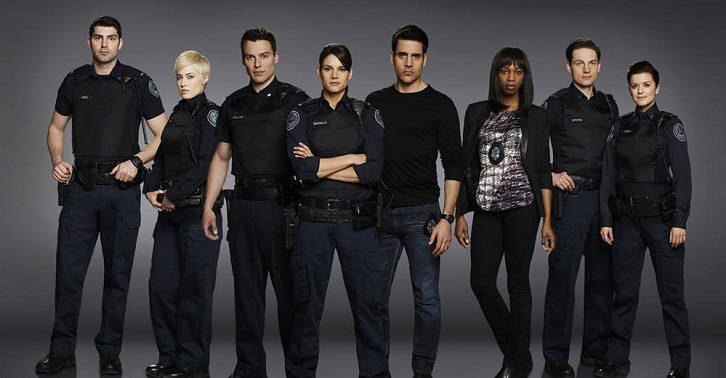 GLOBAL BRINGS OUT THE BIG GUNS THIS SUMMER STARTING WITH THE WORLD PREMIERE OF ROOKIE BLUE SEASON 6
Plus, Ratings Juggernauts Extant, Under the Dome and Big Brother Make Their Much-Anticipated Returns

The complete Global Spring/Summer primetime lineup is listed below.

ROOKIE BLUE, SEASON 6 - Thursday, May 21 at 9 pm ET/PT
Last season the officers at 15 Division unearthed their sins of the past - dug through it, aired it out, and paved the way to move forward. They have all grown and are more resilient than ever. This season, they will have to learn to embrace living in the gray areas, because life is complicated and the best laid plans are just that. But sometimes it's the unpredictable things life throws our way that turn out to be exactly what we need. Season 5 saw an average weekly audience of 1.5M (2+), growing seven percent (2+) and nine percent (A18-49) over Season 4.

UNDER THE DOME - Thursday, June 25 at 9 pm ET/PT
Under the Dome returns for its third season with a special two-hour premiere on its new night, Thursday, June 25 (9-11 pm ET/PT). It moves to its regular time period on Thursday, July 2 and airs in the 10 pm ET/PT timeslot. Based on Stephen King's bestselling novel, Under the Dome tells the story of a small town that is suddenly and inexplicably sealed off from the rest of the world by an enormous transparent dome. This season, Emmy Award® winner Marg Helgenberger guest stars in an extended story arc, beginning with the premiere episode, as the town's inhabitants figure out the Dome's purpose and what it wants from them. Last season, Under the Dome was the number one drama of the summer and ranked in the Top three programs nationally (A18-49).

EXTANT- Wednesday, July 1 at 10 pm ET/PT
A serialized mystery thriller starring Academy Award®-winner Halle Berry, Extant makes its sophomore debut on Wednesday, July 1 (10 pm ET/PT). This season, astronaut Molly Woods discovers she has unwittingly put the human race on a path to destruction, and that she and mysterious stranger J.B. Richter may be the only hope for survival. Last season, Extant was the number one new summer show and ranked in the Top 10 across multiple demos.

FOOD FIGHTERS - Thursday, July 2 - 8 pm ET/PT
Host Adam Richman (Man v. Food) once again gives homegrown amateur cooks the chance to test their skills against professional chefs. Every down-home cook has that one signature dish or secret family recipe that always gains favor with friends and family; but now they have to go head-to-head in the kitchen against five professional chefs, who try to cook your specialty dish even better than you in the hopes of winning over a dinner party made up of the American public. With each savored victory, the cash prize gets bigger and bigger as the home cooks rise to every challenge and outcook the professional chefs.

RUNNING WILD WITH BEAR GRYLLS - Monday, July 13 - 10 pm ET/PT
In the second season of Running Wild with Bear Grylls, the famed adventurer and survivalist continues to take celebrities into the most remote and wild locations in the U.S. and around the world for a 48-hour journey of a lifetime. Each of the celebrities endures the harsh wilderness in high-octane, action-based and empowering journeys spread over remote locations. Grylls and each celebrity will have to push both their minds and bodies to the limit to successfully complete their journey.