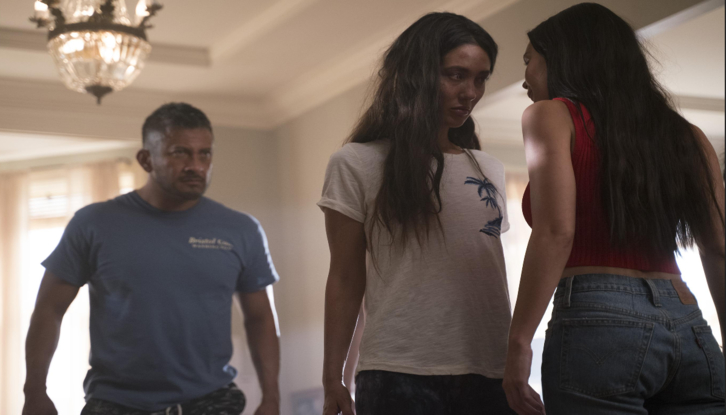 So, Siren finally returned to our screens tonight! Season 1 feels like a lifetime ago, and so much has changed since the shows beginning.

Still very much feeling the effects of the siren song, Ben is in a whole lot of trouble. Trying to forget about Ryn and their connection isn’t proving easy at all, and so he’s taken to activities such as rock climbing without appropriate attire, and of course halfway up a mountain he would have a spell which causes him to lose his footing and fall, almost losing his life in the process.

Returning home he is told how lucky he is to still be alive and breathing, and many people are concerned for his wealth-fare. One of those people is Maddie even if her concern is somewhat awkward. She and Ben haven’t really spoken to each other since the final episode of season 1, where Maddie realized they needed a break. There is still a lot of love between the two of them, and that’s not a love I think either of them wants to lose, but whilst Ryn is stuck inside Ben’s head a relationship between them just isn’t going to work. It is noted they’ve taken to avoiding each other and working different shifts so they don’t run into each other, but with Siren back on screen that is obviously going to change real quick.

Ryn has been keeping her distance to try and give the two of them space. She of course misses them, and is still trying to grasp human emotions and relationships which is completely understandable. She has come a long way from the girl in the pilot who couldn’t even speak broken English, and in the premiere she gave employment a go as she tried to master the art of being a sales assistant for Helen. That didn’t entirely go well, even if it was extremely funny, and Ryn was soon proudly setting off to the market with money to buy fish.

She was however slightly distracted by a disturbance in the sea. It’s not something Helen could sense for obvious reasons, but Ryn could. She was soon taking to the waves in an attempt to understand what exactly the disturbance was. Unfortunately she ended up getting caught in it and left extremely disorientated, which of course meant that Ben and Maddie had to go after her.

Taking the boat out, they eventually found Ryn naked in the woods where she explained what was going on. It was then revealed to us that whilst Decker may be long gone, the military is not. They’re still experimenting, and now using waves to cause an electronic disturbance in the water which only the likes of Ryn will be able to hear and feel.

She’s not the only one effected by this though as the episode title hinted at. Said arrival of the episode was Ryn’s mermaid coven returning to land after being disturbed by the waves in the water. It’s not something they’re particularly happy about, and given Xander’s father’s killer is among them along with the Queen that Ryn previously defeated in season 1?

As we know though, Ryn is more than capable of fending for herself. She knows how to assert her dominance over her rival, and make it clear that she can and will defeat her if she misbehaves. Ben and Maddie though are more afraid for what the mermaids could do to the town’s residence. After all, they’re not all as friendly as Ryn, nor are they all as willing to embrace mankind as she is. Whilst the great ot3 which is Ryn/Ben/Maddie didn’t get much solo screen time this episode as it was more focussed on setting up the season’s story and tension, what we still got between them was enough. They may have been off our screens for a while, but the chemistry between all three actors was still on point and of course Helen is still there to act as the Nobel guide to them all.

Another person who is still around? Xander.

Given I can understand his anger over his father’s death I haven’t been too hard on him. It’s extremely difficult whenever someone we love dies, let alone your father who also acted somewhat as a mentor and of course with him gone, Xander’s livelihood on the boat is in jeopardy. However, I’m at a massive loss as to what exactly they’re trying to do with his character. The show already has enough tension with the mermaids vs military, mermaids vs human kind and then the inner conflicts of Ben & Maddie trying to do right by Ryn but not wanting to endanger anyone’s lives, without Xander and his grief still being the giant elephant in the room. It’s a story that gets old and boring real quick, and that’s a note I shall touch upon again in my review of next week’s episode.

Whilst the premiere was all about setting up the tension for the new season, it also took a bit of time to introduce us to two new characters. One of which is a wonderful lady who quickly befriended Calvin & Xander at the bar, so it came as absolutely no surprise when it was revealed that she is the military’s latest agent sent to the town. I’m hoping I wasn’t the only one who mistook her at first glance for Floriana Lima, but hopefully the show will do something more with her than obsessed military Doctor who connects in a rather bizarre way with her captive and then kills herself because the song gets stuck in her head.

We also had the bombshell news that Donna had a daughter! That's right, Ryn's officially an Aunt! What this means for the show I'm sure we'll find out in time and it'll be interesting to see whether Ryn manages to take Donna's daughter under her wing, and how exactly she takes the news of her mum being dead and more importantly, if she finds out Xander killed her.

The other new arrival was Maddie’s long-absent mother. She didn’t really get that much screen time in the first episode for obvious reasons, but that will improve slightly in the next episode as we start to get to grips with the tension between her and Maddie.

Overall The Arrival was a solid premiere. It moved things a lot at a gentle enough pace for returning viewers, whilst providing enough of a recap for previous events to new viewers. Whilst it may only be the first episode, I am still extremely cautious over the increased episode count for the season. Part of the reason Siren was so good last year, was because everything moved at a lightning enough pace without providing whiplash and there was next to no filler. The finale felt a bit flat with most of the tension and storylines being resolved in the penultimate episode, and I do worry with an increase in episodes, the story may feel stretched out in places.

But that’s a worry for another day!

What did you think of Siren? Drop your thoughts in the comments below and look out for my preview of episode 2 coming out sometime over the weekend.