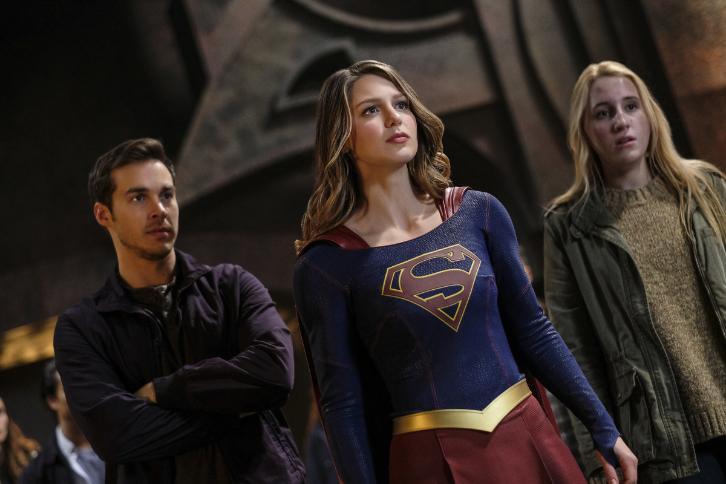 
Kevin Smith Interview
Thanks to MM for the heads up.


Of course, Kara wasn’t the only Danvers sister whose love life Smith couldn’t wait to explore. In many ways, he says, “Alex is the heart and soul of this show.”

“The Alex and Maggie relationship starts turning into something really beautiful,” he teases. “We got to do a couple of scenes with them, early in the relationship, where they start to figure out who they are as a couple.”

Another highlight for Smith was getting to film at the DEO with J’onn J’onzz, “one of [his] favorite characters in the DC pantheon,” as the gang discusses how to rescue Supergirl and Mon-El from Roulette’s clutches on Slaver’s Moon.

“Hank turns to Alex, and in that perfect intonation — deep and rolling — he says that Slaver’s Moon has a red sun,” Smith recalls. “Me and Eric [Carrasco], who wrote the episode, our nipples got hard. We lost our fluids.”

Sneak Peek 2
Thanks to Phun for the heads up.

KEVIN SMITH DIRECTS; ROULETTE RETURNS — Kara (Melissa Benoist) is moved by the story of a missing woman named Izzy (guest star Harley Quinn Smith) and decides to investigate despite Snapper Carr’s (guest star Ian Gomez) order to leave it alone. Kara takes Mon-El (Chris Wood) with her to the last place Izzy was seen and the duo find themselves thrust through a portal to another planet, Slaver’s Moon, where the downtrodden are sold as slaves. The leader of the trafficking ring is none other than Roulette (guest star Dichen Lachman). To make matters worse, Slaver’s Moon has a red sun, which means Kara and Mon-El are stripped of their powers and stuck on the planet with no way home. Meanwhile, back on Earth, Alex (Chyler Leigh) blames herself for Kara’s disappearance, fearing she’s become too focused on her new relationship with Maggie (guest star Floriana Lima) and too complacent in watching out for her sister. Kevin Smith directed the episode with story by Andrew Kreisberg and teleplay by Eric Carrasco & Jess Kardos (#209). Original airdate 1/23/2017.


Sneak Peek *Not the Best Sound Quality*
Thanks to Ivan for the heads up.

for anyone who needs it: here's the sneak peek for 2x09. sorry about the crappy audio pic.twitter.com/VfOJ8csZlR