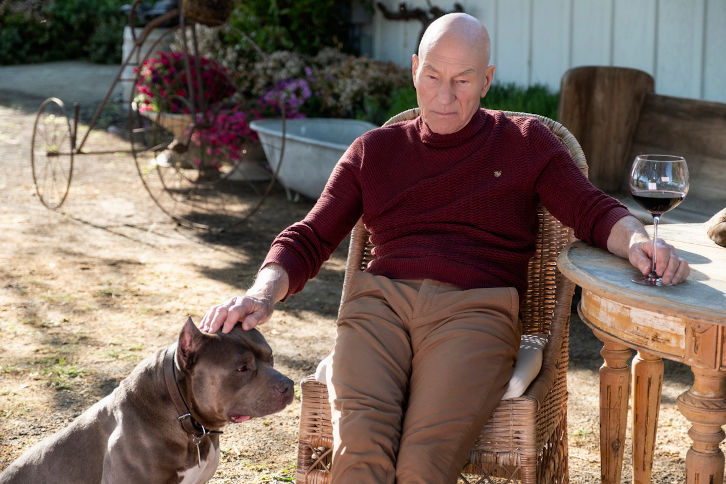 New Teaser Promo
Thanks to katia for the heads up.

New Teaser Promo
Thanks to Thomas for the heads up.

Following the premiere, new episodes of STAR TREK: PICARD's 10-episode first season will be available weekly on Thursdays, exclusively for CBS All Access subscribers in the U.S.

The journey is far from over. #StarTrekPicard #Picard #SDCC2019 #ComicCon pic.twitter.com/LcO7Xng3Vi


What are you most excited to see in the new series? #StarTrekPicard #SDCC #StarTrekSDCC pic.twitter.com/SfobSAhYOo

3. Picard seeks to fight a specific injustice, yet won’t have his usual resources.

“Because he’s no longer in Starfleet, he no longer carries the weight of that behind him,” Kurtzman says. “In some ways, it’s easier to be [a great man] when you’re a captain. But it’s an entirely different thing when you don’t have an army behind you. When you want to get something done and fight an injustice, how do you do that when you’re really only one man?”

Region Free Teaser Promo
Thanks to Lou for the heads up.

25 years ago today, ‘All Good Things’ brought us to an end. The end is only the beginning. #StarTrekPicard to stream exclusively on @CBSAllAccess in the United States, Amazon #PrimeVideo in more than 200 countries, in Canada on @SpaceChannel & @CraveCanada https://t.co/MQp0eP0ovM pic.twitter.com/m9sDqvS8Mo

Press Release
THE END IS ONLY THE BEGINNING

May 23, 2019 – CBS All Access today revealed a first look at the highly anticipated return of Jean-Luc Picard with a teaser trailer and key art for the upcoming original series, STAR TREK: PICARD.

STAR TREK: PICARD features Sir Patrick Stewart reprising his iconic role as Jean-Luc Picard, which he played for seven seasons on “Star Trek: The Next Generation.” The new series will follow this iconic character into the next chapter of his life.

STAR TREK: PICARD will air exclusively on CBS All Access in the United States and will be distributed concurrently internationally by CBS Studios International on Amazon Prime Video in more than 200 countries and territories and in Canada on Bell Media’s cable networks, Space and Z, and OTT service Crave.

Teaser Promo
Thanks to Lord Nikon for the heads up.