The Flash - Was Foxtel Australia's 3rd Highest Rating Show In 2014 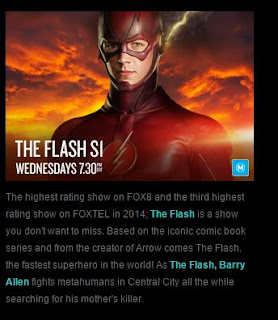 Thirty-six hours have passed and reality is starting to sink in for all sides. Barb and Russ must come face-to-face with the suspects, Carter and Aubry, for the first time at the arraignment hearing. For Aubry and Carter, the hearing is their first opportunity to see one another since being arrested. Elsewhere, Tony finds himself terrified and alone as he gets placed into juvenile detention. The gravity of the situation weighs heavy on his father, Alonzo. Hector's legal troubles are compounded when the investigators discover an existing warrant for his arrest in Mexico. With more unsettling facts being uncovered about Matt and Gwen, relations between Barb and Russ, and Tom and Eve grow increasingly strained as they disagree on where Matt's body should be buried, on "American Crime," THURSDAY, MARCH 12 (10:00-11:00 p.m., ET) on the ABC Television Network.

"Episode Two" was written and directed by John Ridley.