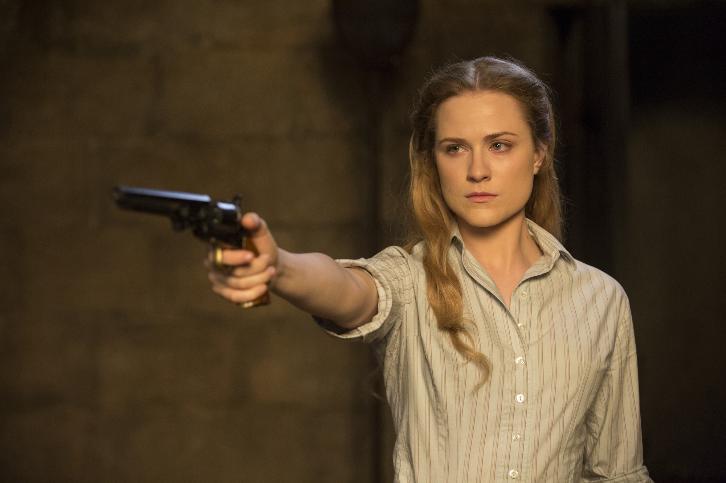 Dolores (Evan Rachel Wood), William (Jimmi Simpson) and Logan (Ben Barnes) reach Pariah, a town built on decadence and transgression — and are recruited for a dangerous mission. The Man in Black (Ed Harris) meets an unlikely ally in his search to unlock the maze.


So I could probably spend this entire conversation asking about the scene between Dr. Ford and Cullen, where he threatens her to stay out of his way. What would you like to share with us about making that scene?

Nolan: This episode was directed by Vincenzo Natali and we were also excited about this moment where you were reminded about the sheer power that Ford can command as the creator of this place. You can imagine Walt Disney having a lunch at Ariel’s Grotto in the middle of Disneyland and commanding all the roller coasters to stop all at once. There’s an extraordinary power there. And with Anthony Hopkins, he’s such a fascinating actor to watch, you don’t quite ever know where you stand with this guy. In the pilot, Ford felt a bit like the Lion in Winter, that he might be stepping back. Here, we’re reminded that you underestimate this guy at your peril. He has his own designs of what he wants this place to be. You’re also reminded he has an extremely controlling relationship with the hosts. Like the moment when he cuts a host’s face open and you realize why they’re all stripped bare in cold storage, that it’s a very practical measure on his part to make sure nobody makes Arnold’s mistake again, that treating these hosts as machines is vital to ensure that the techs who work with them don’t mistake them for people. You’re reminded that Ford is not a friend to the hosts. He’s a father figure and that can go a number of different ways.

Maeve is really starting to figure things out, at this point she’s apparently the host who’s most ahead of the curve.

Nolan: There’s a tip of the hat there to the short story I wrote that Chris turned into his screenplay for Memento. The short story itself was focused on the asylum portion of the protagonist’s storyline. The film references that in flashback. The story was most interested in how would you even get going if you’re not allowed to remember anything. How would you create a primitive memory? We’ve established in Analysis and Diagnostic Mode that the hosts have all the answers they need, they’re just not allowed to access that. With Maeve, she’s looking outward and trying to find the larger context of this world, and Dolores is looking inward and trying find the meaning of her own story.

Source:
Read More on EW
We're slowly learning more about William's backstory. Every episode, there's a new piece of information. We now know that he and Logan work together and are soon to be brothers-in-law, and that Logan views this as a work trip of sorts. How much did you know about William's backstory and the arc ahead, going into the series?

Very little. Almost only what I needed to know from moment-to-moment. A relatively rich back-story was given to us by Lisa and Jonah, as far as who these people are, how they feel about certain things, and kind of what their aim is in life in general. But as far as the arc of this part of the story, for each of these characters, nobody knew anything. All the actors were in the dark. If we were given a scene that you somehow needed more information to play for your process, Jonah and Lisa would be there and enlighten you on anything you needed to know. As far as knowing what's about to happen, we were all just as hungry for the scripts each month as you guys are for the episodes each week.

The Man in Black aside, what would it take for someone like William to go full black hat? Because that's where we're left off at the end of the episode: Logan asks William to "go black hat with me," which feels like the complete opposite of what we know about William right now. If William ever were to go fully in that direction, what would have to happen to that man for him to go there?

William's there to open up his world. He's certainly not there to turn into an asshole. And the end of four, it's not like Logan is saying, "We're going to go f—k shit up." It's, "We're going in this direction." William is going to be part of the experience, but he's also going there to protect Dolores. It's not that William has agreed to go and be a dick. He's agreed to go on this new direction of a place, and meet Slim's boss. It's more of an acquiescence: "Ugh, fine," than him saying, "Alright, I'm going to go black hat."